Students stand in solidarity during Community of Feeling 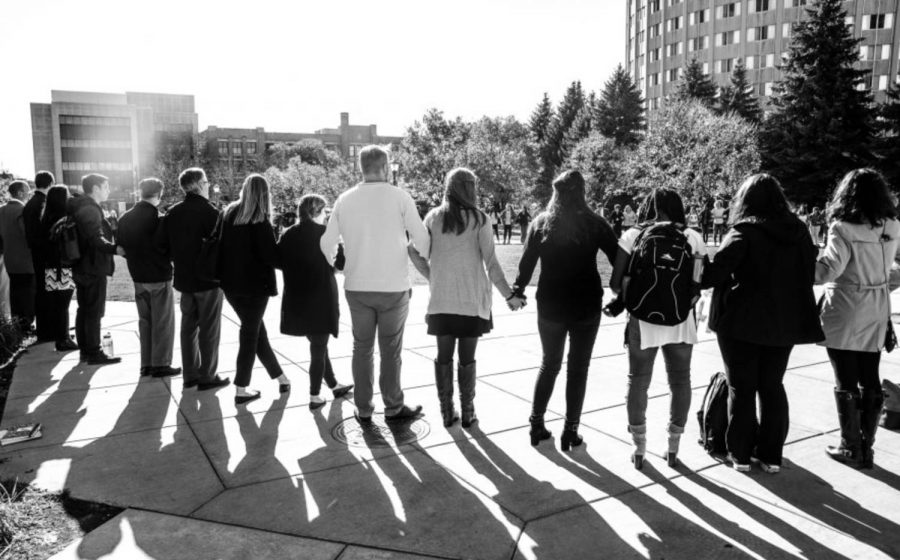 Some of Marquette’s cultural organizations held an event calling for solidarity in the Marquette community in response to the election of Donald Trump.

Perla Hernandez, a senior in the College of Business Administration, said she felt it was important to show her support for friends after the election.

“I have friends that have been crying ever since the election results came in,” Hernandez said. “I come from a strong Hispanic community and a lot of them are really worried.”

Angel Fajardo, a sophomore in the College of Education, said he was standing up to express his frustration with Trump’s language towards immigrants.

“I’m a child of immigrants myself and I have a lot of family who are immigrants,” Fajardo said. “I feel like the rhetoric that has been spouted, not only by our President-elect, but also by a lot of people who support him, has been really inflammatory. It’s not evocative of what we want in this nation.”

Fajardo said he hopes the demonstration will bring a sense of hope to marginalized groups on campus.

“There’s a lot of people who are feeling a lot of despair who need some visual representation to show that there are still a lot of people on this campus who care about what they think,” Fajardo said.

Provost Daniel Myers said he wanted to share his support with the student organizations.

“I think a lot of people on campus need to feel a sense of support and unity right now,” Myers said. “I decided I wanted to be part of it.”

To close the event, the crowd chanted “We are Marquette.” The crowd was then invited to join in an interfaith unity prayer at the Chapel of the Holy Family in the Alumni Memorial Union. The prayer was hosted by Campus Ministry and the Office of Intercultural Engagement.

Bernardo Ávila-Borunda, a member of the Campus Ministry staff, said it was important to have a spiritual aspect in the call for unity.

“Part of our purpose here isn’t just to enrich ourselves intellectually, but we also want to be a spiritual and emotional support to one another,” Ávila-Borunda said. “Being a Jesuit university, the Jesuit spirituality at its core is something that can apply to everyone. That’s why we had an event that was inclusive of all faiths.”