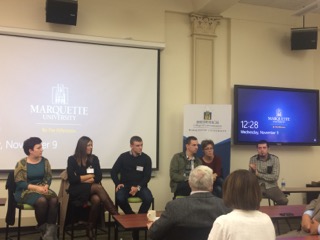 Serbian journalists shared their experiences with Marquette students and faculty during a panel November 9.

The discussion was based upon the results of Tuesday’s election, the consequential rise of Donald Trump and the media’s coverage of the election.

“It feels like a professional failure because no one of the media and the agencies did not predict this,” said Jovana Gligorijevic, a board member in the Independent Journalists Association of Serbia. “It feels like a failure on all sides and it just does not make sense how they got this wrong. Our job in the media is to be a mediator between the elites and the general public, and in this case, it did not work.”

When asked about covering the ‘madness’ behind this election cycle, the Serbian journalists agreed it was important to cover.

“This is history,” said Ana Kristic, an investigative journalist. “At some point, you stop being a human being and start becoming a journalist. Covering last night was a big moment around the world and we got to witness it.”

Filip Jovanovic, editor of a student newspaper, said he still enjoys covering politics in spite of this election.

“It is hard to explain,” Jovanovic said. “This is groundbreaking news. After all of this, I still love covering politics, and the fact that we get to be here and bring this news back to Serbia is very special.”

“(In Serbia) If you say something about the party in power and supporters or the government do not agree, they will constantly attack you on social media,” said Nikola Kocovic, a radio host. “We have a smaller country and so we have an audience that pays a lot closer attention to us, and so everything we say is looked at by the government and the regular civilians.”

In Serbia, the way candidates are portrayed differs from the U.S. According to Gligorijevic, lawn signs supporting certain candidates are not seen and neither is political advertising on television.

“It is interesting to see what America does not have, but Serbia does,” Gligorijevic said. “In Serbia, we have ‘electoral silence’ which means that two days before the election, the country lets the people think for themselves and billboards and posters are taken down.”

Despite these differences, the journalists said they enjoyed learning about the American election system and look forward to bringing back their knowledge to Serbia and sharing it among readers.

“I think we definitely learned new ways and ideas to improve,” Jovanovic said. “Our general impression is that this campaign is very dirty but there are a lot of positives that we can take and try to implement in Serbia.”