Students vote third party due to lack of quality options 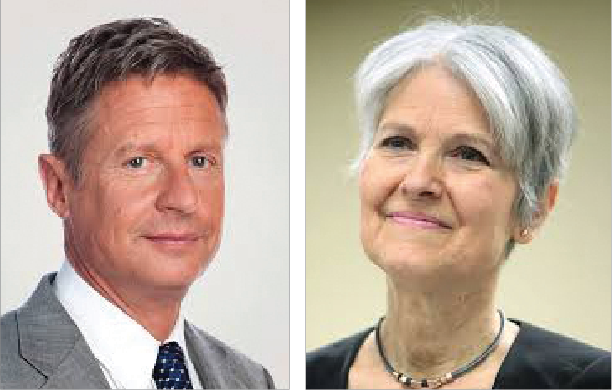 When it came time for David Sando to cast his vote, he found himself less than thrilled about his options.

“These are the two worst candidates that we’ve seen,” he said of Republican presidential nominee Donald Trump and Democratic nominee Hillary Clinton. “People probably say that every year, but I really think these two are awful.”

So Sando, a sophomore in the College of Business Administration and a registered Republican, voted absentee for Libertarian candidate Gary Johnson. With an election cycle that brought forward Clinton and Trump as the mainstream presidential nominees, voters looked to third party candidates like Johnson and Green Party candidate Jill Stein as alternatives to the two major party candidates.

Both Johnson and Stein ran for president in 2012 as the candidates for the Libertarian and Green parties, respectively. Johnson a former two-term Republican governor of New Mexico,  ran for the Republican presidential nomination in 2011, but eventually left the party before receiving the Libertarian nomination. Stein is a physician and environmental activist.

The Libertarian Party and the Green Party are two of the most common third parties in recent presidential elections. Libertarians are considered fiscally conservative and socially liberal, advocating for smaller government and more personal freedoms. The Green Party focuses on its four pillars of peace and nonviolence, ecological wisdom, grassroots democracy and social justice.

Sando began to learn about Johnson after seeing Trump’s continued success in the primaries. Sando said he never supported Trump and does not believe Trump is experienced in the way a government works.

Though Sando believes in limited government, he does not completely identify with libertarian ideals of complete personal freedom. Sando believes Johnson is the candidate with the best character and the most experience of the candidates in the 2016 presidential race.

“Gary was a two-term governor of a state that was the opposite of what he was, so he knows how to work with two legislatures, which is what the president needs to do as well,” Sando said. “(Libertarian vice presidential candidate) Bill Weld had basically the same experience, so they’re the most experienced ticket in terms of public office and the kinds of similar job, duties and responsibilities of the president.”

Sando said he began supporting Johnson in his presidential bid before the Republican National Convention. He donated to Johnson’s campaign and even considered starting a Youth for Johnson-Weld group on campus. Voting for Johnson meant casting his vote for someone he believed in.

“I think a lot of people are voting for somebody in order for the other person not to win,” Sando said. “A vote for Gary was a decision to vote your conscience.”

But without the recognition that comes with the Democratic and Republican parties, it can be difficult for third party candidates to make an impact on the presidential race.

“It’s harder to be a third party,” Julia Azari, an associate professor of political science said. “You’re probably not going to get anywhere. Our system can’t really sustain more than two parties because of its winner-take-all nature.”

The last third party candidate to win a state in a presidential election was former Alabama Gov. George Wallace of the American Independent Party in 1968.

Azari said third party candidates run for president to make a point and promote their ideas or to split the vote to deprive another candidate of the presidency.

“There are reasons for it if you are committed to your policies to get ideas out there, but even getting to a level of credibility where people are really noticing your candidacy is pretty challenging,” Azari said.

Although the unfavorable views of Clinton and Trump have caused people to question the two-party system, Azari, whose research and teaching interests include American political parties, said it’s not likely to happen unless the United States changes the way it functions.

“Having a presidency in a multi-party system is really a recipe for instability,” she said. “If you think about how much trouble presidents have had governing, imagine winning a third of the vote.”

On the national level, if either Johnson or Stein wins five percent of the popular vote, their parties are eligible to receive federal funds, which could help them moving forward after the election.

Azari said  there is more room for opportunity for third parties at the local and state levels.

Christian Evans, a senior in the College of Business Administration, had trouble with both the presidential candidates.

“It kind of burns,” Evans said about voting in his first presidential election. “I don’t believe either of the candidates that the two major parties are supporting are of the caliber that we’ve entrusted that position with.”

Evans considers himself a moderate Johnson supporter and although he doesn’t believe he will be a member of any political party, Evans identifies with libertarianism as a political concept.

“I definitely have a huge value for individual liberty, that people should act according to how they see fit, that they shouldn’t be under the control of government,” he said. “The government should work for people.”

Evans first grew interested in Johnson after listening to an interview with the candidate in February.

“I think he has the integrity and that, more so than the other candidates, his political views align with mine,” Evans said. “My second reason for supporting him is that he is a third party candidate. When we aren’t satisfied with two, why be in a system that perpetuates two parties?”

Sando agreed there should be wider acceptance of third parties, and suggested the polarization of Clinton and Trump could lead to reforms in the Democratic and Republican parties to be more inclusive of people of different views.

“I don’t know if I necessarily believe that we shouldn’t have a two-party system, but that the two parties need to be more flexible and need to make adjustments to their platforms and to what their party ultimately stands for,” Sando said.

Evans is realistic about what it takes to get a third party candidate elected president, but he sees the polarization of the two main candidates and some of Johnson’s polling numbers as encouraging.

“I think that people can see they’re not bound by any certain system,” he said. “That’s restrictive and I want our government to be more accessible to people, not less. In a weird way, I think this election is so bad that it might help.”