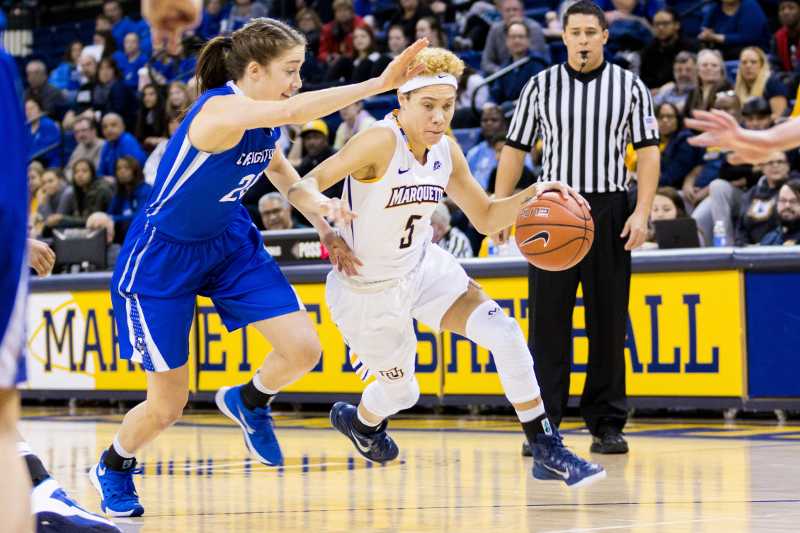 Marquette and Creighton are expected to be among the top teams in the conference this season.

Marquette women’s basketball tips off their season tonight against Longwood, so now seems like as good of a time as ever to take a look at where each team in the BIG EAST stands.

In short, the BIG EAST will likely be a two-bid conference, three at the most. The conference is nowhere near as strong in women’s basketball as it is in men’s. DePaul is the only nationally relevant team at the moment; they’ve made two straight Sweet 16s. Creighton will probably make the NCAA tournament, Marquette and Villanova are more likely to make the NIT, Georgetown might make the NIT and everybody else will be lucky to post a winning percentage above .500 in conference play.

That is the “too long, did not read” version of how things ought to play out this year. However, if you want some more detail, I’ve assembled each team in order of their preseason poll ranking below and given you some more things to consider.

WHAT SHOULD I LIKE?: Almost everything. DePaul is several notches above every other team in the conference. The story is right on the stat sheet. DePaul posted far and away the best scoring margin in the BIG EAST at +17.9 per game. The Blue Demons made it to the Sweet 16 last year, their second in three years.

WHAT SHOULDN’T I LIKE?: This team doesn’t have a whole lot of flaws. One might nitpick a little bit and say that they’re a bit too guard-focused – 10 of 14 players on the roster are guards – but there’s nothing here that’s a huge deal.

WHAT WILL HAPPEN?: DePaul should have the conference title all but locked up with a couple weeks left to go in the season. This is a talented, experienced team that is no doubt angry about losing in the BIG EAST tournament last year. The Sweet 16 may be calling again for the Blue Demons.

WHAT SHOULD I LIKE?: Creighton made a run to the BIG EAST Tournament title game as only a seventh-seed last year, and they return nearly their entire team. The Blue Jays will also get 2014 BIG EAST Player of the Year Marissa Janning back. She missed all of 2015 with a fibula injury.

WHAT SHOULDN’T I LIKE?: 3-pointers make up a lot of Creighton’s offense. More than 37 percent of the team’s shots were from beyond the arc. The offense tended to stagnate if the threes stopped falling.

WHAT WILL HAPPEN?: There’s no substitute for experience, and Creighton will prove that this year. An NCAA tournament berth is in their future if Janning can stay healthy.

WHAT SHOULD I LIKE?: The offense is fantastic. Marquette scored at a rate of 77.7 points per game, good for second in the conference. Sophomore guard Allazia Blockton poured in 18.7 points per game and is a bona fide all-American candidate this year.

WHAT SHOULDN’T I LIKE?: Marquette’s defense is less than fantastic. The Golden Eagles gave up 78.3 points per game. That’s the sixth-worst mark in the entire country. Coach Kieger has repeatedly said improving on-ball D is the top priority.

WHAT WILL HAPPEN?: Marquette is a year away from being an NCAA-caliber team. An NIT berth seems more appropriate for this year, but keep an eye on them.

WHAT SHOULD I LIKE?: Villanova moved the ball around the perimeter with a high degree of efficiency, averaging an assist-to-turnover ratio of 1.81. Only UConn had a higher ratio. Defenses cannot abandon their assignments for even one second against this team.

WHAT SHOULDN’T I LIKE?: In terms of shooting threes, Villanova makes Creighton look positively quaint. Over 45 percent of the Wildcats’ shots last year were from three. Perhaps that explains their conference-worst 37.5 field goal percentage.

WHAT WILL HAPPEN?: It’s tough to predict how the Cats will do because their style of play is so dissimilar from everyone else’s. However, it seems like they’re a little too reliant on a deep ball that doesn’t work often enough to justify the volume in which it’s being shot. NIT is the most likely outcome.

WHAT SHOULD I LIKE?: If you thought Marquette’s turnaround last year was impressive, you’ll be blown away by what Georgetown did. The Hoyas finished 16-14 a year after winning only four games. Most of that roster is coming back this year, which would indicate another step forward.

WHAT SHOULDN’T I LIKE?: This team cannot make threes at all. Only 26.1 percent of Georgetown’s deep shots found the net last year, and only one player shot more than 30 percent from beyond the arc.

WHAT WILL HAPPEN?: There’s a core here that could definitely threaten some of the conference leaders. Out of all the teams in the BIG EAST, Georgetown is the most likely to exceed its preseason billing.

WHAT SHOULD I LIKE?: St. John’s has a strong winning tradition. Head coach Joe Tartamella has led his team to a postseason tournament in each of his first four years at the program’s helm, including an NCAA berth last year.

WHAT SHOULDN’T I LIKE?: It’s not every day that the reigning conference tournament champion is in the bottom half of the preseason poll. Both of the Red Storm’s leading scorers from last year – guards Danaejah Grant and Aaliyah Handford – graduated. That’s going to give opposing defenses a lot more leeway.

WHAT WILL HAPPEN?: The Red Storm will be pesky, but will not sniff the NCAA tournament as they struggle to establish a new identity.

WHAT SHOULD I LIKE?: There are some really intriguing newcomers hanging around South Orange, New Jersey these days. Jayla Jones-Pack is a 6-foot-4 center that will likely anchor the Pirates’ defense. Freshman guard Kaela Hilaire averaged nearly 30 points per game in high school, which tends to translate well to the collegiate level.

WHAT SHOULDN’T I LIKE?: Everybody that made Seton Hall good last year is gone. Tabatha Richardson-Smith, Shakena Richardson, Aleesha Powell: all double-digit per-game scorers, all graduated. Nine of this team’s 17 players are freshmen. That puts a damper on expectations.

WHAT WILL HAPPEN?: The Pirates will probably go back to the NCAA tournament in a year or two. Don’t expect them to get within shouting distance this year, though.

WHAT SHOULD I LIKE?: Butler has one of the best forward combos in the conference. Sophomores Brittany Ward and Tori Schickel create a ton of matchup problems and crash the boards. Both players averaged more than seven rebounds per game last year.

WHAT SHOULDN’T I LIKE?: Nobody is going to look at the offense and mistake it for the Golden State Warriors. The Bulldogs averaged 58.2 points per game last year and were dead last in the conference in turnover ratio.

WHAT WILL HAPPEN?: Butler’s strategy is to drag other teams into defense-centric fights, then beat them on the glass. It’s nothing to worry about if your team has size or scoring prowess. If you don’t, then beware the Bulldogs.

WHAT SHOULD I LIKE?: This team is a lot like Butler in the respect that the uglier the game is, the more of an advantage they can build. The Musketeers only let up 60.5 points per game last year, the result of some disciplined rotations.

WHAT SHOULDN’T I LIKE?: Ball movement is a sore spot for this team. Nobody on the Musketeers had more than two and a half assists per game. Xavier as a whole finished dead last in the conference in assists.

WHAT WILL HAPPEN?: Xavier isn’t a particularly inspiring team. Nobody on the roster is capable of taking over a game, which doesn’t bode well for their chances of keeping up with the BIG EAST’s more prolific scorers. Xavier will be near the BIG EAST’s cellar this year.

WHAT SHOULD I LIKE?: A young core and new head coach Jim Crowley might offer some new energy to an otherwise lackluster program. Senior Sarah Beal is also a nice piece. She averaged just under 10 points per game last year.

WHAT SHOULDN’T I LIKE?: A lot. Providence had just one conference win last year and finished at the bottom of the BIG EAST in almost every statistical category.

WHAT WILL HAPPEN?: The good news is that there’s very little room to get worse. The bad news is that it will be multiple years before things truly get better.