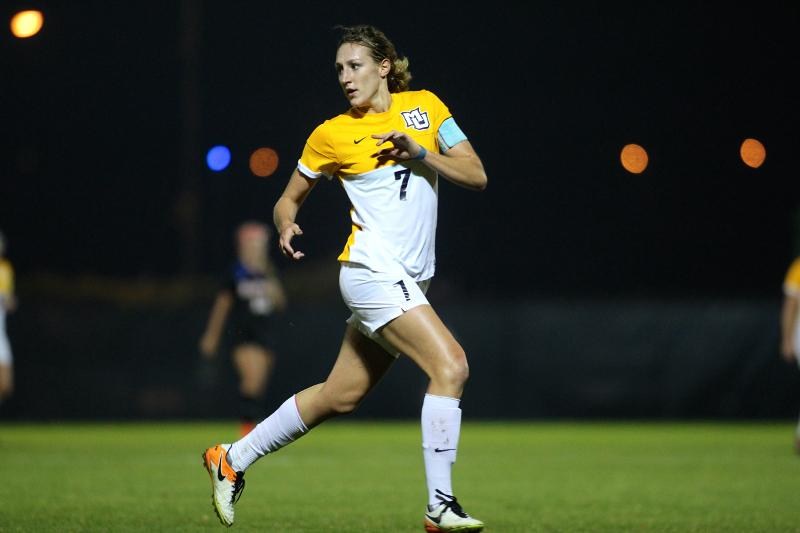 Morgan Proffitt spent the summer with the U.S. U-23 team.

With time winding down in a scoreless first half between Marquette and Butler, the ball rolled aimlessly toward centerfield. Bulldog midfielder Serina Kashimoto sprinted toward the loose ball, racing Golden Eagle Morgan Proffitt. Kashimoto met Proffitt at the ball and Marquette’s star sent Kashimoto straight to the ground. Proffitt came away with the ball, and total control of the midfield.

Kashimoto is an All-BIG EAST First Team player and she pulls the strings in Butler’s midfield. After she lost that 50/50 ball to Proffitt, her impact on the game quickly evaporated. With one quick, powerful tackle, Proffitt changed the tempo of a tight game.

“That’s how she plays,” head coach Markus Roeders said. “That’s how she does things all the time. She doesn’t think twice about it and we’re obviously the benefactor of it.”

It’s plays like this one that separate Proffitt from other top players. In 2016 alone, she was named BIG EAST Defensive Player of the Year, earned spots on the All-BIG EAST First Team and MAC Hermann Award Watchlist and was nominated for the Senior CLASS Award.

But if you ask her about her ability to alter games with one tackle, she’s quick to deflect.

“I mean not just me but other people, you know when I see Cali slide tackling to win a play or Emily, or anybody, it’s like we won it, we’re going at ‘em,” Proffitt said. “It just provides that motivation to go for it. That’s one of the things we pride ourselves on is if we win those 50/50 balls we’ll have the momentum, so, gotta win those.”

And she does — as much as anybody in the conference. As one of two defensive midfielders in Marquette’s formation, Proffitt has free reign to fly around midfield breaking up plays. She plays a destroyer role that allows her to win balls at an incredible rate. It’s a perfect role for her.

Proffitt’s skills were on display on a different stage this summer when she was called up to the U.S. U-23 Women’s National Team. It was a special experience few players get to have.

“It was amazing,” Proffitt said. “Words can’t describe how awesome it was.”

It was another honor for the Columbus, Indiana, native and her humility was on display once again.

“When she got asked to play with the U-23 national team, which is amazing, she didn’t want to tell us right away,” her roommate, senior defender Cali Pyzdrowski, said. “Not that she was embarrassed, but she didn’t want to seem like she was bragging, even though we probably brag about her more than she brags about herself.”

Also on the U-23 team with Proffitt this summer were Stanford stars Andi Sullivan and Jane Campbell, who were called up to the full national team last month. Between playing with players of Sullivan and Campbell’s stature and working with national team coaches, Proffitt learned how she could sharpen her game.

“(The coaches) really pointed out key things to work on, so one of the things was my technical driven balls, like 40 yards across the field just driven on the ground,” Proffitt said. “I really have been trying to work on that throughout the season.”

Isn’t that a nitpicky thing? Nobody thinks a great player isn’t great because they can’t play low driven balls 40 yards across the field with ease.

“True, true,” Proffitt laughed. “But those little things is what separates good players from great players. So you know, like Andi Sullivan, she can hit a ball on a dime 30 yards across the field, so that really separates her from people like me.”

There it is, the vaunted Morgan Proffitt humility.

“There’s some areas that she understands as well where she can and wants to get better,” Roeders said. “And that’s part of what makes her special.”

With time winding down on her Marquette soccer career, Proffitt has to consider what her next step is – but don’t you dare think she’s done with soccer.

“I would ideally like to go professional,” Proffitt said. “So the big question is whether I want to stay here or if I want to go internationally and play, so I’ve got to figure out the logistics of how that all works.”

“The U.S. league is the best league, but the pay overseas is better,” Proffitt said. “So there’s a lot of things to weigh.”

If she plays in the U.S., she won’t be around for her final semester of college.

“I would apply for the (NWSL) draft in January,” Proffitt said. “And depending on where I am I could finish up school. If it’s in Chicago I could just commute, but if I’m traveling, then I’m going to have to hold off on graduating.”

It’s not so much a matter of if, but where and when.

“She has a bright future,” Roeders said. “She will play at the next level somewhere. Hopefully over here, with maybe some opportunities to do it overseas in the offseason.”

If she needs references for her next job in soccer, she won’t have to look too far.

“Since my freshman year I’ve said I’m so thankful she’s here,” senior forward Liz Bartels said. “She’s a beast out there. She can stop anyone.”

“She’s so low key,” Roeders said. “She’s so humble. She’s driven. She’s motivated. She wants to learn. She wants to do well. The team clings on her, at the same time she doesn’t make it about herself. We will miss her.”

“She’s just a great girl,” Pyzdrowski said. “She’s just a role model for everyone on our team. Even being in the same class as her, I just look up to her all the time.”

Even in a theoretical BIG EAST draft, Roeders suggested other coaches would be foolish not to pick Proffitt first.

“If you could add one player to your team,” Roeders said. “From any of the other (BIG EAST) programs, who would that be? I couldn’t imagine that people wouldn’t take Mo.”

For all she’s already accomplished, there’s been one goal Proffitt has yet to accomplish – winning an NCAA tournament game. She’ll have a chance to do just that Saturday night when Marquette heads to Madison to play Wisconsin in the first round of the NCAA Tournament. How big would that be for her?

“I definitely want to take advantage of this time, it’s my last go round at it, but all credit to my teammates they’ve made me the player I am today and I really hope that I can play the best that I can play for them.”