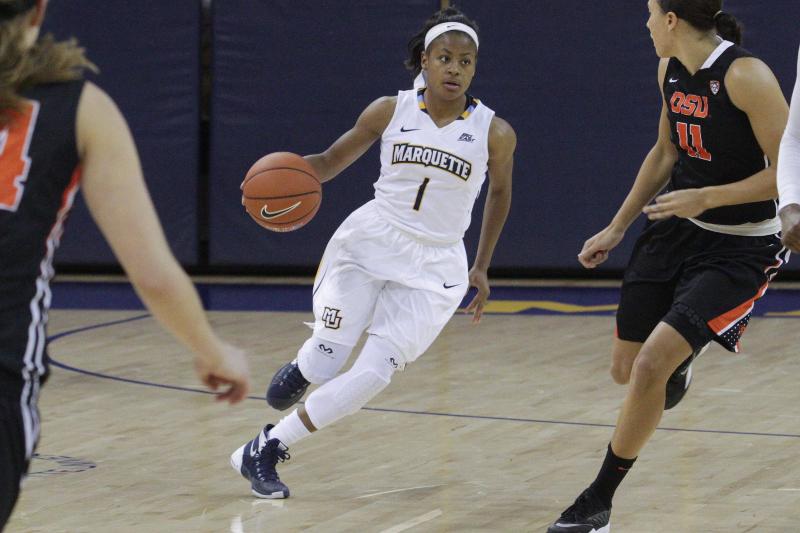 Stop me if you have heard this before: defense wins championships.

It may be one of the most cliche sayings in sports, but for the Marquette women’s basketball team, an improved defense is imperative if they want to win the BIG EAST championship.

“I think people expect that we are going to be better, but I don’t think there is a team or coach out there that really understands how good we can possibly be, other than me, because I get to see them everyday in practice,” women’s basketball coach Carolyn Kieger said. “This team has the ability to be a top-25 team. It’s just a matter if we are ready maturity-wise and if we can get that defensive end down.”

The primary focus of the offseason for the Golden Eagles was to improve the defense in order to create a more balanced attack. As Marquette descended upon this mission, the coaching staff was faced with the challenge of having to teach players whose skills naturally lend themselves to offense to use those skills for defense.

“You are taking an offensive-minded kid and then embracing them into a defensive field that is different,” said assistant coach Vernette Skeete, who focuses on defensive schemes. “It is a different buy-in and we don’t have a lot of upperclassmen who had to drill that in. We are kind of all starting at the same time. We all kind of have the same clean slate. … Once everyone sees it, we have been able to compare it to some of the best in the country, it was easy to connect after that.”

“I think once you put your heart into it, it’s all about how bad you want to play defense,” guard Danielle King said. “Anybody can play defense if they put their heart into it, so that is really what we changed, putting our hearts into our defense.”

Heading into the season, Marquette has clear goals for what they hope to accomplish on the defensive end of the court.

“We want to keep people out of the paint,” Kieger said. “Our main thing is really focus on keeping teams to 35 percent field goal percentage. So that is something we have been talking about and not letting people come in the paint with easy layups. And then also we really want to defend the 3-point line. That is something we really have been focusing on since literally our Seton Hall game last March.”

Marquette ranked in the middle of the pack last season in terms of fouling. This season, the Golden Eagles want to limit their fouling to 13 fouls per game and work on preventing teams from getting to the free throw line.

Kieger said that if the team is to improve on defense, a strong defensive stance will have to start with King, who at only 5-foot-5 lacks height, but has the speed and quickness to create havoc for opposing point guards.

“I once heard a quote that ‘If you are a player and see the point guard working hard on defense then they will follow suit,'” King said. “I always live by that and make sure I will do right on defense, so they can follow suit after me.”

With this Friday’s match against Longwood rapidly approaching, the coaching staff and players alike are confident in the strides they have made defensively.

“We didn’t play any defense last year,” Skeete said jokingly. “We have tremendously improved. It is the thing that you go through when you have very good offensive players coming from high school. They might not have had to play defense and now understanding that you have to guard somebody and stop somebody is a different concept that a lot of kids don’t have to face coming into the collegiate field.”

“With the practice guys and playing against them with everybody being stronger and more competitive this year, you can just tell the difference in confidence levels,” sophomore Amani Wilborn said.