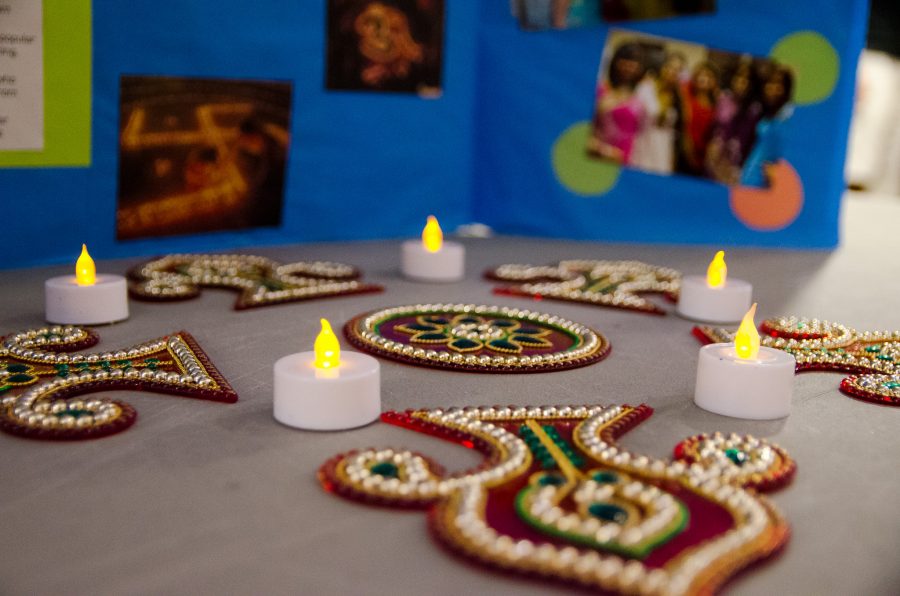 Lord Rama, king of Ayodhya, returned from 14 years of exile after defeating Raavana, the lord of another city. Raavana abducted Rama’s wife amongst other horrible things. The people of Ayodhya lit candles and decorated the city in celebration of his homecoming. Hindus still celebrate his historic return.

The story of the Hindu god Rama depicts triumph over evil and is considered an important cultural holiday.

Diwali, pronounced dih-wah-lee, is the Hindu festival of lights. The Indian Student Association, celebrates Diwali annually to bring the festival to Marquette students, while achieving a bigger goal of enveloping Marquette and Milwaukee into the culture. This year, they hosted a Diwali dinner Nov. 3.

The holiday occurs in the fall season to celebrate a story dating back thousands of years ago.

ISA replicated the candles by hanging ornamental lights in the basement of Cudahy Hall.

“Diwali dinner has been a tradition throughout the beginning of ISA for over twenty years,” Arshdeep Dhaliwal, vice president of ISA and a sophomore in the College of Business Administration, said. “Small or big, we always (host) it.”

This year, Royal India, a local Indian restaurant, catered the event, providing foods such as paneer and chicken tikka masala. Before partaking in the feast, Ajani Patel, ISA’s event coordinator and a sophomore in the College of Communication, shared the story of Diwali to a packed room.

“We have about 200 members or so, and we really want to make ISA welcome to everyone,” Patel said.

While ISA is commonly known for an annual cultural show, which features music, dance, singing and food, the executive board is currently working on expanding the organization as a whole within Marquette and to the greater Milwaukee area.  E-board members said they would like to see ISA evolve as a group open to everyone and host more events that celebrate Indian festivals, holidays and traditions, while collaborating with other intercultural organizations.

“Coming from cultural families separately, and practicing traditions at home, we want to bring that back to Marquette, especially because (members of ISA) do not get to go home and celebrate with their families,” Deepa Pardiwala, ISA president and a junior in the College of Engineering, said. “We want to bring the festival to them.”

The executive board is striving to overcome the lack of campus recognition. ISA wishes to involve everyone within the Marquette community.

“Everyone is welcome to ISA events, even if you’re not Indian,” Pardiwala said. “Our biggest goal is to keep things in the association as part of a big family.”

Pardiwala said that ISA is joining up with different cultural organizations, such as the Black Student Council and the Asian Student Union to encourage intercultural advancements, as well as several Milwaukee-based organizations to promote cultural learning and growth.

“We also really want the community as well to look into ISA more and participate, especially because there are so many great experiences and fun things we have been putting on for years that we want to share with the Marquette community,” Dhaliwal said.

“That’s the key,” Pardiwala said. “It’s a big family that we really want to grow.”