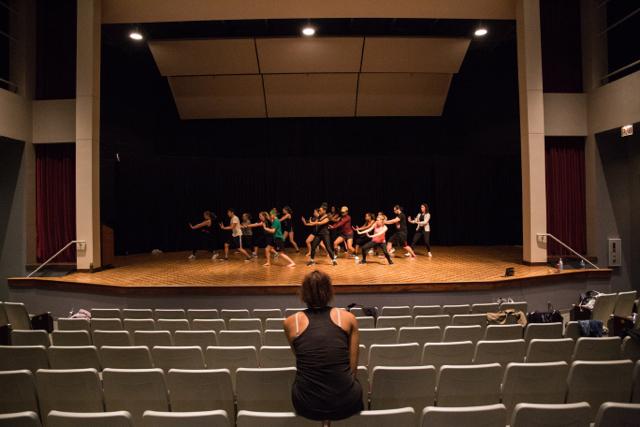 Members work cohesively to create clean and crisp routines. At Saturday’s Hype show, audiences can see the hip-hop dance group perform to hits like D.R.A.M.’s “Broccoli.” Attendance is free and the doors will open at 7 p.m.

Hype performs two showcases per year, and their sister company, Hype UWM and other local dance companies, will perform shows with the group as well.

“One thing that’s really unique about Hype is that we bring in a lot of groups from the community, so it’s not solely based on Marquette,” said Jeremy Rodriguez, a senior in the College of Business Administration who dances with Hype. “There was one year we brought in these little kids that all had to be between 5 years old and 13 years old, and you get all this different talent from everywhere. When they’re doing dress rehearsals, you get to see all their hard work come together.”

The 19-person team usually meets twice a week from 8:30-10:30, with the expectation being that they put in a new piece every week.

“Every Monday, either an in-house choreographer or an outside choreographer will come in and they’ll teach us either their whole piece or about half of it,” said Nicole Germino, a senior in the College of Health Sciences and a Hype dancer. “Then we go home and practice, and on Wednesday they either teach the rest of it, or they clean it up so we have it ready.”

Germino said this fast-paced learning makes for one of the dance group’s biggest challenge: keeping up. Fail to get a piece down by week’s end, and dancers fall in danger of moving on and never fully learning it.

“If you’re not consistently doing that piece over and over on your own time, or meeting up with people outside of practice, it can be easy to forget,” Germino said.

Tech Week, the precious few days left before the live show, is where the details really count. Practices expand to three hours, and no aspect of a piece is off-limits from inspection.

“Tech Week is where we clean it and really break it down,” Germino said. “We make sure everybody’s in the right time, everybody’s arm placement is the same or that everybody’s looking the same direction. There’s definitely pieces that look great at the end because there is a lot going on, but they’re really difficult to clean, because maybe it’s fast-paced or very stylized.”

The chaotic preparation process can cause last-minute scrambling and anxiety, but it also forged tight, strong relationships between the members.

“We’re totally a family, we spend so much time together, you have to be,” Germino said. “We have a lot of people that come on the team that have never danced before that are just self-taught, so I hope it shows what people are capable of doing if you really put forth the effort.”

Rodriguez is a perfect example of this kind of dancer.

Rodriguez said that the hard work is worth it in the end.

“Watching the performance is so different from being in it,” Rodriguez said. “Your moves get harder and more intense as the show goes on, so by the end of the show, you’re exhausted, but you also have this huge adrenaline rush that feels great.”

Steven Krum, a sophomore in the College of Engineering, watched one of the shows and vouched for the production.

“It’s really cool to see all the things they can do,” Krum said. “They’re really impressive, and the audience can get sort of pumped up throughout the performance.”

Right now, the team is putting in grueling hours, trying to iron out all the final details.