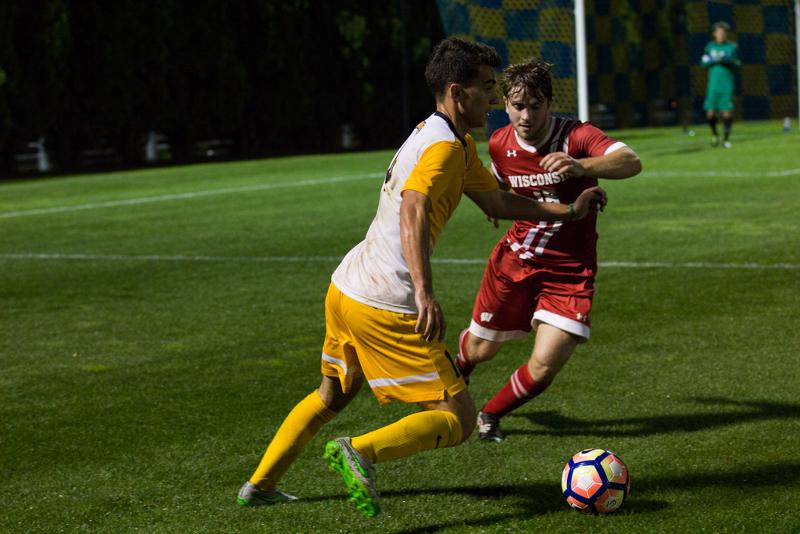 Luka Prpa is the first Golden Eagle to score 10 points since C. Nortey in 2013.

It would be easy to take a cursory look at the men’s soccer season and chalk it up as a failure. The Golden Eagles finished ninth in the conference and missed the BIG EAST Tournament for a second season in a row. The only team they finished ahead of, Seton Hall, beat Marquette in the head-to-head matchup.

Bumps were expected with this group. Louis Bennett’s squad had only two seniors and 13 newcomers, many of who were entrusted with starting roles. Every player who scored a goal last season was gone, including Louis Bennett II, who left the team just before the season to sign a pro contract in Cyprus. That all being said, this season certainly had its positives, and reasons to be optimistic for the program getting back on track.

“I’ve checked this year and last year,” Bennett said. “We have improved in every statistic, except we have an equal amount of wins. … The brand and style of soccer was close to where we want it to be.”

The most obvious positive is BIG EAST Freshman of the Year Luka Prpa, who is the first Marquette player to score 10 goals since C. Nortey in 2013. He finished second in the conference in regular season points, just one behind Providence’s Julian Gressel.

“Originally we recruited him to team up with Louis,” Bennett said. “Without Louis, Luka took his opportunity to take it to task. … This is the scary thing about Luka, he knows he’s not the finished article yet.”

In addition to Prpa, Marquette returns their entire offensive unit, which features players that have shown flashes of brilliance. Freshman Connor Alba finished second on the team in points, and Bennett consistently said he acted like a veteran from day one. After failing to find the scoresheet last season, Daniel Szczepanek scored 10 points this season. Toby Howell, Jan Maertins and Diego Nunez were all contributors.

Only having two seniors was a disadvantage this season, but it’s a positive going forward. Defenseman John Pothast is a huge loss, but Danny Jarosz looks poised to take over his role. The other senior, goalie Mac Wheeler, lost the competition between the pipes to Wicho Barraza. Next year there are only three seniors, meaning this team is set up for the next few years.

Speaking of defense, Patrick Seagrist lived up to his billing as the 15th best defender in the Midwest according to Top Drawer Soccer, playing every minute this season at left back and looking poised when carrying the ball up field.

As for results, the 4-0 opening loss looks much better now that Kentucky is ranked No. 12. Marquette dominated Northwestern, a team that beat No. 8 Indiana in the Big Ten Tournament this weekend. Marquette defeated Xavier, who was ranked second in the conference at the time, and hung with No. 24 Creighton until the very end.

“If we had gotten into the tournament, I know firsthand no one really wanted to play us,” Bennett said. “They knew that eventually we were going to set it right.”

Sure, there were certainly some serious low points this season. The offense dried up in a six-game winless streak in the middle of the season. The previously mentioned Seton Hall loss gave the Pirates their first BIG EAST victory in two years. The Golden Eagles squandered a 3-0 lead against crosstown rival UW-Milwaukee.

You have to take all of the negatives with context. Although Bennett likes to call this season a retooling year, it’s always been a rebuilding one. Bennett has clearly brought talent to campus, especially considering this class’s top-10 ranking by Top Drawer Soccer. Already with plenty of experience under its belt, Marquette should climb up the conference table the next two years.