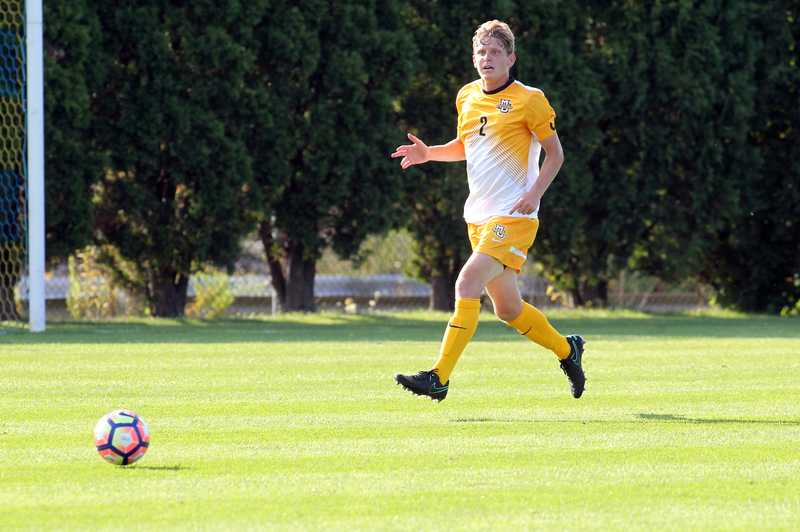 John Pothast started every game in his Marquette career.

As seniors Mac Wheeler and captain John Pothast stepped off the pitch for the last time at Valley Fields Thursday night, they received standing ovations from parents and fans alike, as Marquette defeated DePaul on the final night of the season, 1-0.

For Marquette head coach Louis Bennett, it has been a season of ups and downs, but the one thing that stayed constant was Pothast and Wheeler’s commitment to winning.

“I think these two are champions,” Bennett said. “They’ve got a championship ring, but it’s very hard to win championships. It’s a lot harder to play like a champion and have a heart of a champion when things don’t always go your way, and those two have been fantastic this season. Without them, I don’t know if we’d win the game tonight.”

The final match of the season for the Golden Eagles was a back-and-forth affair, and though Marquette had nothing to play for, they still came out determined to see their seniors off with a victory.

Luka Prpa netted the only goal of the game, as he scored his 10th goal of the season in the 23rd minute off of a penalty kick. Prpa has had the knack for scoring all season long, and Bennett said Prpa should be rewarded.

“I think he’s the best freshman in the BIG EAST,” Bennett said. “We knew he would make an impact, but we were not sure how he would acclimate to the college game and I think that he has acclimated very well. We play a certain way that really helps Luka, and Luka helps the way that we play.”

“It’s really great to have local boys do exceptionally well at Marquette and it helps firm up the fact that we look all over the country, but we look in our own backyard first.”

In the second half, DePaul grabbed possession and created more opportunities than the Golden Eagles, but the backline, anchored by Pothast, held the red-hot Blue Demon counter-attack offense in check, as DePaul tallied nine shots, compared to Marquette’s 10.

Both seniors played key parts in the victory, as Wheeler made crucial match-winning saves minutes after each other. First, in the 71st minute, Simon Megally, who leads DePaul in assists and goals, dribbled down the end line and slotted a through ball to Philipp Koenigstein, who spun and shot from just outside the six-yard-box. In the 75th minute, another DePaul shot caused Wheeler to make a diving save. The redshirt senior had five saves in his final appearance with Marquette. Wheeler was pleased with his performance, but knew that other players are just beginning their college soccer journey.

“Stick with it,” Wheeler said. “Stay the course, don’t get frustrated if things don’t go your way. There are still ways to contribute and you can keep growing as a leader and as a soccer player and hopefully when your time comes around, you can get a few young guns to help get it together and win a championship.”

The Marquette soccer team is very young, and Bennett pointed out the potential in the team. Three freshmen played every minute and played in significant positions. Bennett also pointed out the expectations of sophomores and juniors, who will continue to help the team grow.

“This team doesn’t give up,” Bennett said. “We are exciting to watch, too. When you come down here to the Valley, you get value for money, that’s for sure.”

At the beginning of the season, the Marquette manager knew his team could so easily put up four goals, and just as easily give up four goals, but for Bennett, he took that to heart and embraced the young team.

“I’m really proud and I am really happy,” Bennett said. “We showed a lot of heart and a lot of character throughout this season, and even though we may lose, they can see that we are going to give a couple pints of blood every game.”

“We have to realize that what we’ve proven today is irrespective of what may or may not be on the line. If you put on a Marquette shirt, you’re expected to play like John Pothast and Mac Wheeler.”