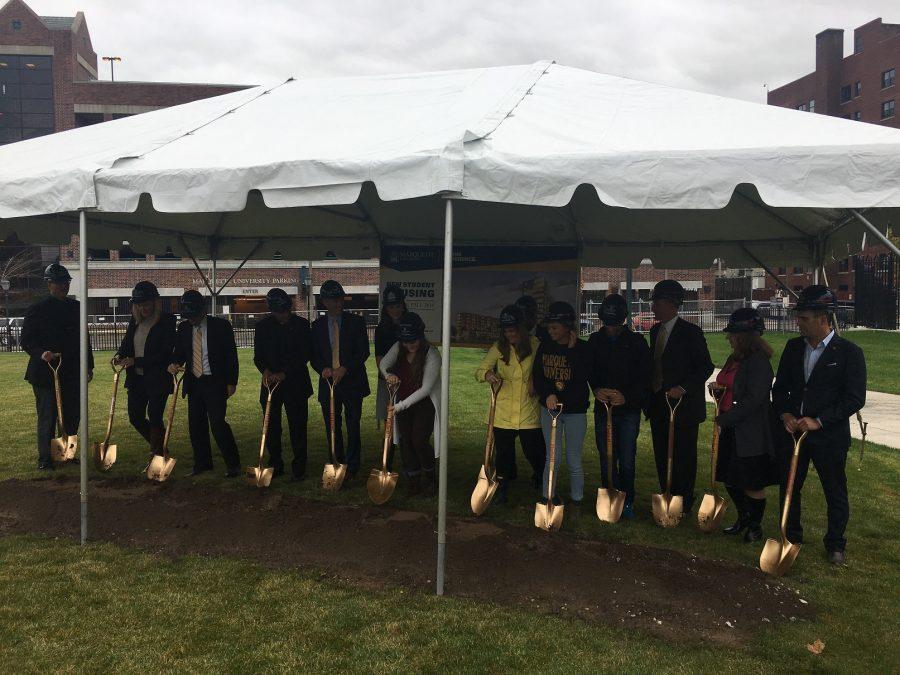 Students and faculty participate in ground-breaking ceremony in front of O'Donnell Hall.

In his speech, Cole touched on how the new residence hall will offer plenty of social experiences for its occupants, particularly interactions with their fellow students.

“There’s a lot of living and learning that happens under (a residence hall’s) roof. It’s a place where (students’) transformed Jesuit education begins,” he said during his speech.

“This particular building is going to make that very much possible,” Cole said.

After a brief blessing from Reverend Nicholas Santos, students and administrators donning hard hats and golden shovels dug up dirt during the ‘ground-breaking’ portion of the ceremony.

Students who participated in the ceremony seemed optimistic about the new project, and what it will bring to the University.

Ishan Bhatia, a freshman in the College of Health Sciences and one of the students who participated in the ground-breaking, commented on the ‘openness’ of the proposed dorm plans.

“It’s open and it kind of gives off a vibe that we are part of Milwaukee rather than just being closed off,” he said.

Bhatia noted that while the residence hall will obviously just be for students, it will still help students feel more like they are part of the city around them.

Madison Hicks, a freshman in the College of Communications, and another participant in the ceremony, said that the University has been in need of a new residence hall since the 1960’s.

“I’m super excited to see so many Marquette individuals and teams come together to research and innovate,” she said.“It will just be such a huge step for Marquette in the future and beyond.”

Hicks said it was ‘amazing’ the project would be completed so quickly.

Haley Velez, a freshman in the College of Communications, who also helped break ground, said that the dorm will bring a “new beginning” to Marquette.

“I feel like McCormick is old and outdated and we need [a new building] to become more modern,” she said.

Residence Hall Association President Lauren Jones is excited about the new development and how it will benefit students socially.

“The spaces they’re talking about having in there at this building really is intentionally designed to foster community,” she said.

The new residence hall, which is a part of the Beyond Boundaries plan, is slated to be completed in 2018. It will be the 9th residence hall that is currently open on campus and will include 750 beds between two interconnected buildings.