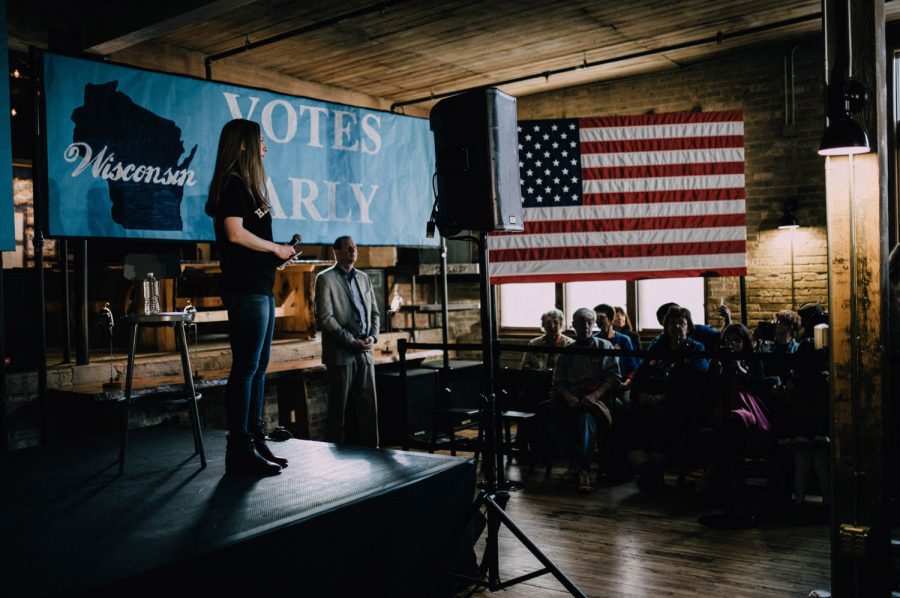 Chelsea Clinton welcomed a crowd of supporters Thursday Nov. 3 at Anodyne Coffee for one of the last events on the home stretch of the presidential race.

The goal of the event was to encourage early voting and to rally supporters for a final push of canvassing before election day in support of the democratic candidate, Hillary Clinton.

Clinton was preceded by Mayor Tom Barrett, who spoke about the importance of early voting. To a chorus of cheers, Barrett said Milwaukee’s early-voting tally has already surpassed the city’s entire vote tally from 2008.

“This is the most important election in history because the stakes are so high,” said Barrett.

Wearing a shirt touting the saying “It’s time to make ‘Herstory’,” Clinton took the stage. She thanked her supporters and shared stories of her experiences working with her mother’s campaign. After sharing a laugh with the crowd about the importance of caffeine in her life, thus the convenience of the rally taking place in a coffee shop, Clinton became serious.

“This election is so important in showing that love trumps hate,” she said. “We have to do all the good we can, for all the people we can, in all the places we can, for as long as we can.”

The coffeehouse was packed with Hillary supporters sporting pins, hats and even pantsuits inspired by the candidate’s signature style. One supporter said she thought Clinton’s demeanor made an impression.

“I thought she was very informative, and I love the way she stressed how family-oriented her mother is,” said Maria Ledesma. “I liked how she presented herself softly and calmly, not so boisterous.”

Other supporters expressed similar views—everyone in the crowd seemed sold on Hillary.

Pamela Kowalski said she loves Hillary’s experience and her relationship with foreign officials, while Dale Nook said he particularly appreciates her support of women’s rights here in the U.S. as well as around the world. One supporter, Georgine Voutila put it simply.

“She’s got everything we need in a president, and Trump has nothing,” she said.

Donald Trump, the republican nominee, was barely mentioned during Clinton’s speech, which many viewed as a welcome departure from the usual.

“I feel like Donald Trump uses all the oxygen out of a room,” said Clinton as part of her response to a question about health care premiums. Clinton said she wishes her mother’s campaign could have been clearer and more detailed concerning more trivial issues such as this, but it didn’t have the chance.

After delivering her short speech, Clinton asked the crowd for questions and advice, whereupon a woman asked about healthcare premiums, referencing her undecided friends who faltered over the 20-30 percent increase.

Clinton addressed the issue of undecided voters, explaining the facts and inconsistencies of the matter and how they would be resolved if her mother becomes president.

The status of undecided voters is particularly important because Wisconsin is a swing state. As a result, the large focus of the entire event was directed toward encouraging last-minute canvassing. Because, according to candidates of both parties, every vote matters.

Clinton’s closing message was along the same lines: a plea for everyone to exercise their vote. In response to the often asked question, “does my vote really matter?” Clinton addressed young people in particular.