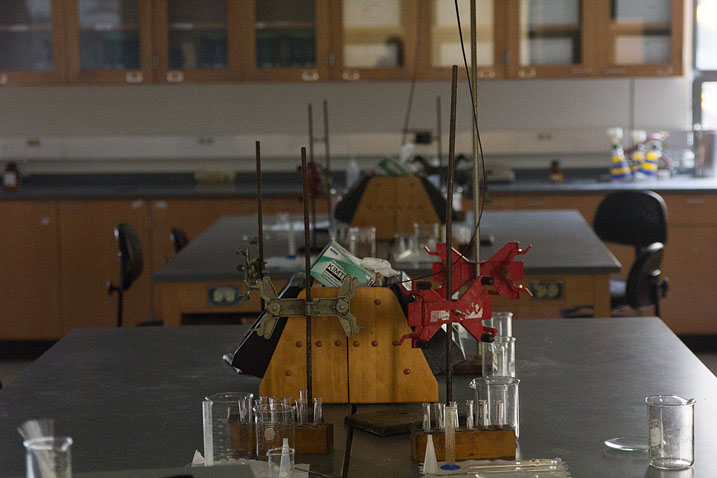 Professors in the Marquette chemistry department are looking into the benefits of using flipped classrooms, a more interactive form of learning.

In a flipped classroom, students watch videos of traditional lectures and do homework sets before coming to class. Students only meet once a week for a lab and a discussion section, where the professor guides students on concepts they struggled with in a group discussion format.

Scott Reid, a professor and chair of the chemistry department, said creating videos of the lecture content allowed him to give students the most important information in a smaller amount of time.

“I could take the content that was from the normal lecture, let’s say a 50-minute lecture, and I could turn it into a video that was about 10 to 15 minutes,” Reid said. “It sort of takes the content, but it condenses it into a format which is more accessible to the student that they can watch at any time.”

Although Reid doesn’t teach a flipped class until second semester, he is continuing to improve his flipped classroom curriculum.

“One of the things we’re currently investigating is the role of online homework,” Reid said. “We’re looking at how it can be used in the classroom and how the delivery of online homework can affect student performance.”

The number of students that received a D, F or withdrew from a flipped classroom dropped 56 percent compared to the lecture-based alternative. Reid said part of the success of the flipped classroom for lower achieving students was the smaller classroom environment, as the discussion format only had 20 to 30 students.

“It’s really hard to hide from the instructor in that environment,” Reid said. “This especially helps for students that may be struggling in the class, as a lot of times those students are the ones that are reluctant to go see the instructor for help.”

Michael Ryan, a professor emeritus of chemistry and collaborator with Reid, said that the ability to review the lecture can also be a benefit for students.

“I think this especially helps for students if English is their second language and people that aren’t used to a college environment,” Ryan said. “They’re able to get a second chance at the lecture.

Reid noted how the role of the instructor changes in a flipped classroom.

“Instead of being the person in the front of the class and the giver of knowledge, you’re working with the class side-by-side and facilitating the process of discovery,” Reid said.

Reid first used a flipped classroom in his General Chemistry 2 class in 2014. Students were not given the alternative of taking the normal, lecture-based course. He said some students were upset about being forced into the flipped option.

Now there are multiple sections of the course, and students have the option between a flipped or traditional classroom.

“That made a huge difference as far as their attitude towards the course,” Reid said. “I think that’s how we see it continuing into the future, giving students an option to take the flipped course rather than them having to take it.”

Shreya Shah, a sophomore in the College of Health Sciences, had Reid for two semesters of General Chemistry last year. First semester was a regular lecture class and second semester was a flipped class, which she ultimately preferred.

“It allowed me to have extra time in my schedule because we only had to attend lab and discussion once a week,” Shah said. “The lectures were all videos so I had control over if I wanted to pause them and they were always available on D2L if I needed to watch them again. That helped because you couldn’t get lost in the lecture.”

Ryan said that with the extra free time students are given, there needs to be checks to make sure they are staying on track.

“You can build things into the system, such as quizzes that need to be answered at a specific time period, and I can see if students have looked at the lecture on D2L, to make sure students aren’t falling behind,” said Ryan.

Danny Steeno, a sophomore in the College of Health Sciences, had the same schedule as Shah. He said that while he also enjoyed the flipped classroom better, he understands how some students might struggle with the format.

“You really had to take initiative to actually sit down and watch the lectures that he put up,” Steeno said. “It’s hard for some people, they’d rather just go to class instead of working on their own. However, it worked for me because I was good at working hard and keeping up with the material.”