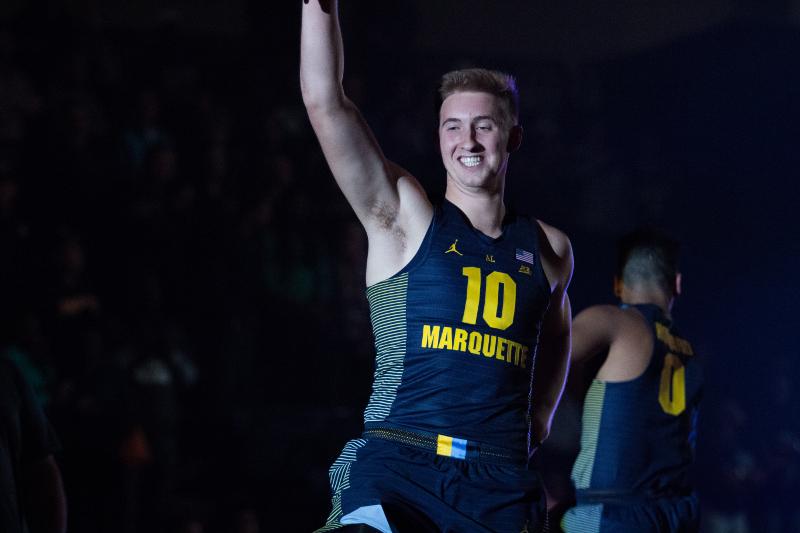 Freshman Sam Hauser was the 2015-16 Wisconsin Gatorade Player of the Year.

Standing at 6-foot-7, forward Sam Hauser is hard to miss. The freshman from Stevens Point, Wisconsin, is Marquette’s third tallest player and is expected to take over at the power forward position — eventually. Despite his size, he’s listed as a guard.

Hauser was confident in his abilities to not only play down low and fight for positioning as post player, but also to spot up and rely on his 3-point shot.

“For the most part in practice I have been playing a stretch four, but at times I might have to play the wing position, which I am comfortable with, too,” Hauser said. “I’ll be ready to do anything and whatever it takes to get on the floor and help our team win.”

“Sam gives us a little something different,” Marquette head coach Steve Wojciechowski said. “He is between 6-foot-7 and 6-foot-8, 220 pounds. And while he is not a post player, per se, he has the size where he can play, especially in the college game, a post position.”

Hauser, the 2015-’16 Wisconsin Gatorade Player of the Year, came to Marquette averaging 18.2 points per game and 9.1 rebounds per game, near double-double numbers. He’s received high praise from local media pundits, who say his game resembles that of Marquette great Steve Novak.

Jumping in mid-interview, freshman point guard Markus Howard agreed and went so far as to exclaim, “Sam is Steve Novak Jr. I think he’s got a little bit of ‘Shake ‘n Bake’ in his game. Marquette fans will see it. It’s coming out this year and I’m letting you know.”

Hauser said that he is already adjusting to the speed of college basketball as opposed to high school.

“Coming into college, it was fast at first just because it was a new level,” Hauser said. “However, I’ve already noticed that it is slowing down for me and things that I may have missed before, I’ve been able to see. I think part of that is having a really good basketball IQ and being mature and letting the game come to me.”

Although the speed of practice has been an adjustment, the intensity has not been an issue in the early-going. Hauser is going up against Sandy Cohen III, Jajuan Johnson and fellow newcomer, Katin Reinhardt.

“Those guys have really helped me develop my game and we have nice competition between us,” Hauser said. “All those guys are wings which helps me get quicker and faster knowing that those are the types of players I am up against.”

“The physicality is a lot different. It’s just a whole other level from high school and college, and you really just have to stick your nose in there and not be afraid and not back down from them.”

Wojciechowski said at BIG EAST and Marquette Media Day that he expected Hauser to be a consistent part of the lineup this season.

“I think that Sam is going to play a lot,” Wojciechowski said. “He makes the game easy, especially for a young player. You know, it sounds simple, but most young players try to make the game as hard as it can be before they figure it out that making (the game) easier, they will be a better player.”

Although Hauser has been focusing on getting stronger and improving his game, another important aspect of his first season has been developing chemistry with the rest of his teammates.

“It’s been great so far, and we’ve all been gelling really well,” Hauser said. “We still have things to work on still, but for the most part so far, it has been pretty good. There is definitely a sense of chemistry already and it should be a good sign for the season.”

The player who helps him the most is his roommate, sophomore center Matt Heldt.

“Matt has really showed me around and has helped me get involved in things, and he really helped me get more comfortable on campus,” Hauser said. “He has also been a big help with my postgame and often times in practice, we are against one another fighting for rebounds and whatnot.”

With the amount of guards that Marquette will be using, Hauser’s presence will undoubtedly be felt within a few games of the season and into conference play. While this season will be a learning experience for him, Hauser will rely on his game and his previous experience of winning back-to-back WIAA state titles to help carry Marquette to their first NCAA Tournament since 2013.

“I am confident in my abilities and understand what it takes to win and so do a lot of the other guys on this team,” Hauser said. “Now that Madness is over, we are ready to go and want this season to get rolling. We know that we have the guys and chemistry to do well and I think now it is our time to prove it.”