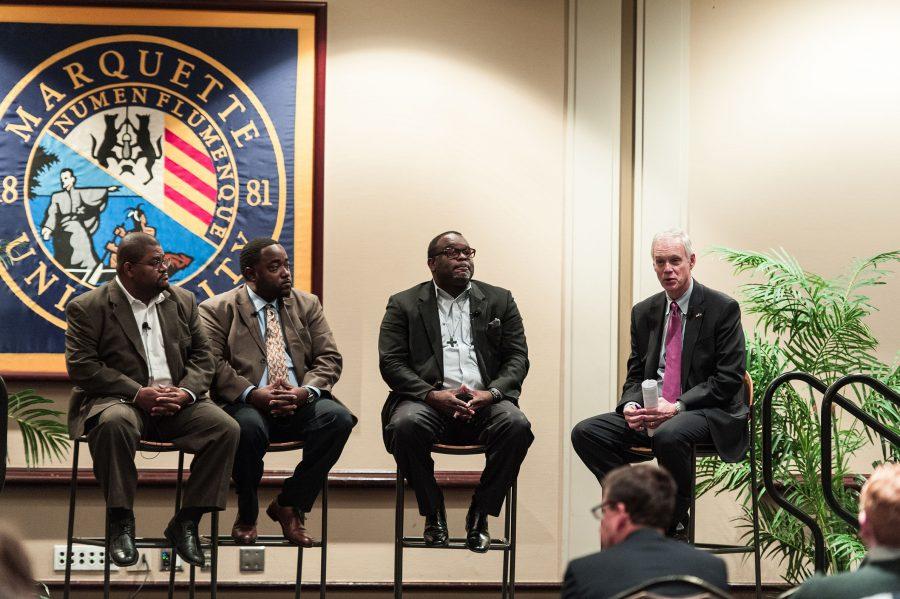 In the midst of his re-election campaign, Republican Sen. Ron Johnson made a special visit Monday to campus to discuss poverty and violence in urban areas.

The event included a panel led by Johnson and a screening of the film “Comeback,” a documentary featuring Paul Ryan and social justice advocates working to eradicate poverty. Marquette chapters of Turning Point USA and Young Americans for Freedom hosted the event in the Alumni Memorial Union.

Johnson attempted to keep the focus off of his campaign, never mentioning his senate race opponent, Democrat Russ Feingold. Instead, he focused on the other guests of the night, poverty fighters Pastor Jerome Smith of the Joseph Project and Pastor Omar Jahwar and Antong Lucky, leaders of Urban Specialists who were also featured in “Comeback.”

Johnson specifically endorses the Joseph Project, and said at the event that doing so has been one of the most rewarding things he has done as senator.

“This is how you solve problems,” Johnson said. “You can try doing these massive government programs, but that hasn’t worked. What actually works is renewed faith, strengthened families, stronger communities and work. We have to make those opportunities available, and programs like the Joseph Project and Urban Specialists, that actually works.”

The panelists, as facilitated by Johnson, touched on topics like the root causes of poverty, rehabilitation and student involvement. Johnson encouraged students to get involved with the Joseph Project and Urban Specialists.

Although the event primarily focused on poverty and social activism, Johnson’s conservative values were still present. He criticized government spending and programs several times, at one point addressing an audience question about how to help the community without large government.

“When you outsource your compassion to a federal government, it never works,” he said. “I continue to preach that compassion is best demonstrated and implemented in your communities. You can turn people’s lives around one person at a time, so this doesn’t require government.”

The audience, composed mostly of Marquette and University of Wisconsin-Milwaukee students, as well as some community members, appeared to be in agreement with Johnson.

“I think we as millennials can make a huge impact, so I think it’s really important that we are reaching out and getting people involved,” Abrianna Koenig, a sophomore at UWM and a member of Turning Points USA, said.

“We are at the age now where we can elect officials and take a stand in our society,” Nick Valentino, a Johnson supporter and sophomore in the College of Arts & Sciences, said. “Ron Johnson is here to hear our concerns, and I think we, and Ron Johnson, can work together to make Wisconsin a better place.”