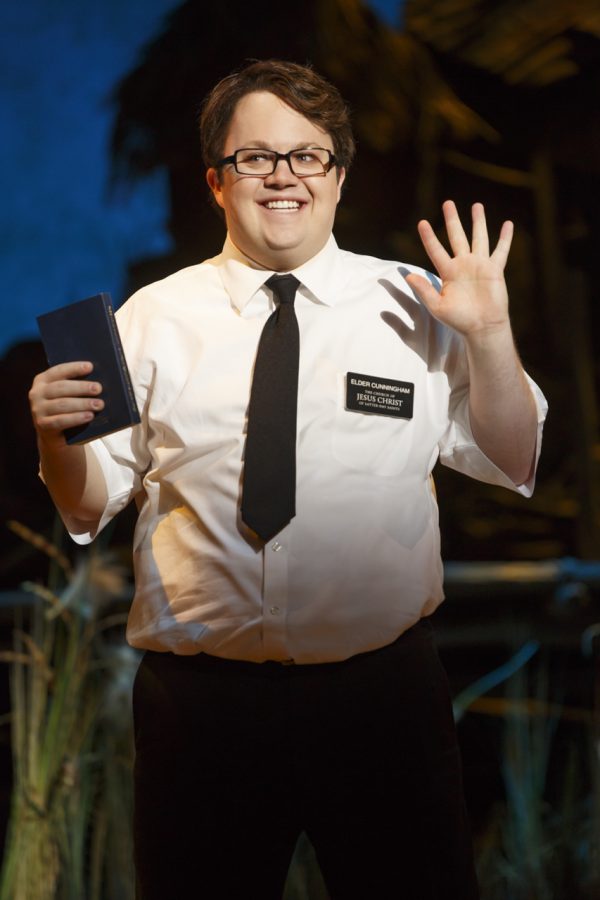 Cody Jamison Strand has performed The Book of Mormon 1,300 times.

White collared shirts, religion and music come together to create a one of a kind classic.

“The Book of Mormon” opened at the Marcus Center for Performing Arts today and will run through Oct. 30. The Broadway tour features a seasoned cast, including Cody Jamison Strand, who plays Elder Cunningham. He was a part of a previous Broadway cast.

While the show remained the same, Strand said he had to adapt to a new lifestyle.

“When you’re doing a show on Broadway you have an apartment to go home to, but when you’re on tour you’re with this one group of people all the time,” Strand said. “It’s like a second family.”

Strand said that he has performed “The Book of Mormon” roughly 1,300 times.

Even after so many performances, Strand works hard every day. Despite how well he knows the show, he said “Man Up,” a song from the show, proves challenging.

“It kicks my butt every day,” Strand said. “It’s the dance number and you have to sing a solo … like a rockstar and the body can’t take it.”

While Strand got an A in ballet in college, he does not consider himself a dancer. However, he said that he thinks the dancing and singing play big roles in the appeal of musicals.

“In real life people don’t burst into song, but there’s something so magical about that idea,” Strand said. “There’s a reason everyone goes to see a musical.”

The magical moments from Broadway are appealing to Marquette students, who have the opportunity to purchase discounted tickets through MUSG or on the day of the show at the Marcus Center for Performing Arts.

Cassie Lecinski, a sophomore in the College of Arts & Sciences, purchased tickets to see the show during its Milwaukee run. She discovered the Book of Mormon soundtrack over the summer but has yet to see the whole show put together.

“Seeing the songs performed live with all the dialogue in between so you get the whole story is going to be wonderful,” Lecinski said.

While Lecinski is ecstatic to see the show in its entirety, not everyone shares the same perspective. “The Book of Mormon” has brought a bit of controversy to its audiences.

Trey Parker and Matt Stone, two of the playwrights, also co-created “South Park.” The cartoon series is known for its dirty humor.

Strand said that while there are humorous moments, the show often surprises audiences. He said it is often wrongfully categorized as being exclusively dirty humor, but does not think that is the case.

“(The show has) unexpected amounts of heart,” Strand said. “There are moments that make you feel a lot of emotion. It has such an amazing message at the end.”

However, Strand admits there are some people who overlook what the show truly means. It is a show about believing in yourself and not changing what you think, even when others disagree with you.

With such a positive attitude, Strand finds fun even in the physically and mentally demanding parts of the show.

“The show starts off with one of these big dance numbers and it’s so funny,” Strand said. “It’s not difficult; it’s just fun.”

Strand also finds the fun in his character through embracing him and relating to him. To get ready for the show, Strand drinks a Red Bull and goes full out.

“My character is the wrench thrown in the Mormon engine,” Strand said. “He’s a looney tune. He’s a cartoon brought to life but he’s so lovable.”

While Strand is getting into character, audience members are ready to sit back and absorb the details of the musical. Lecinski has high expectations.

“I’m mostly excited for the experience,” Lecinski said. “Seeing a musical is always fun. I love all of the songs.”