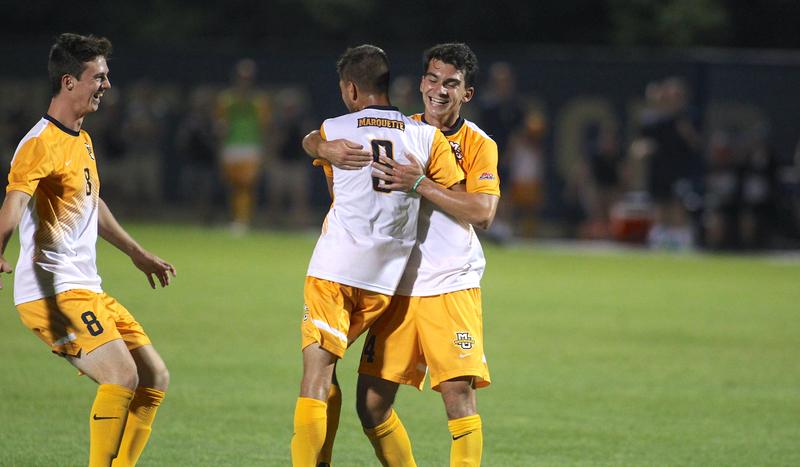 Luka Prpa scored his seventh and eighth goals of the season in the first half.

Saturday night a casual fan at Valley Fields would have a difficult time identifying which men’s soccer team was second in the conference and which was going through an enormous scoring drought.

Marquette stunned Xavier, a team receiving votes in the NSCAA Coaches’ Poll, 4-1, to keep the Golden Eagles’ BIG EAST hopes alive. It’s yet another chapter in an unpredictable season which includes losing to the team picked to finish last in the conference and most recently hanging with a Creighton and beating Xavier, the two teams at the top of the conference.

The four goals are the most Marquette has scored since a Sept. 5 victory against Northwestern and is the first time the Golden Eagles have scored more than once since Sept. 14 against UW-Milwaukee. Marquette scored one more goal in this game than it had in the other five conference games combined.

Prpa opened the scoring in the 10th minute, firing home a penalty kick to the left side of the net after Xavier was called for a handball in the box. He scored a second time eight minutes later, shooting from the top center of the box after an outstanding pass by Daniel Szczepanek.

Szczepanek helped close the door on the Musketeers after Xavier’s Matt Vasquenza scored on a breakaway. Szczepanek scored in the 41st minute after a Patrick Seagrist cross was flicked to Szczepanek by Connor Alba. He returned the favor in the 48th minute, taking a shot that Alba was able to redirect off the left bar and just past the line.

Wicho Barraza had a busy night for Marquette in goal, making nine saves.

Marquette played without center back Danny Jarosz, who missed the game with an injury. His absence led to John Pothast and Anton von Hofacker playing in the middle, with Jack Alberts entering the starting lineup on the right side.

The victory is Marquette’s first in conference play and pushes the team to five points. The Golden Eagles have three games left to try and sneak their way into the BIG EAST tournament, starting with a game at Providence on short rest Wednesday.

“If you look at the games we’ve played, not necessarily the results, we’ve outplayed a lot of teams,” Szczepanek said. “We’re just going to keep doing what we’ve been doing.”