Of Montreal embraces everything weird, obscure at Turner Hall 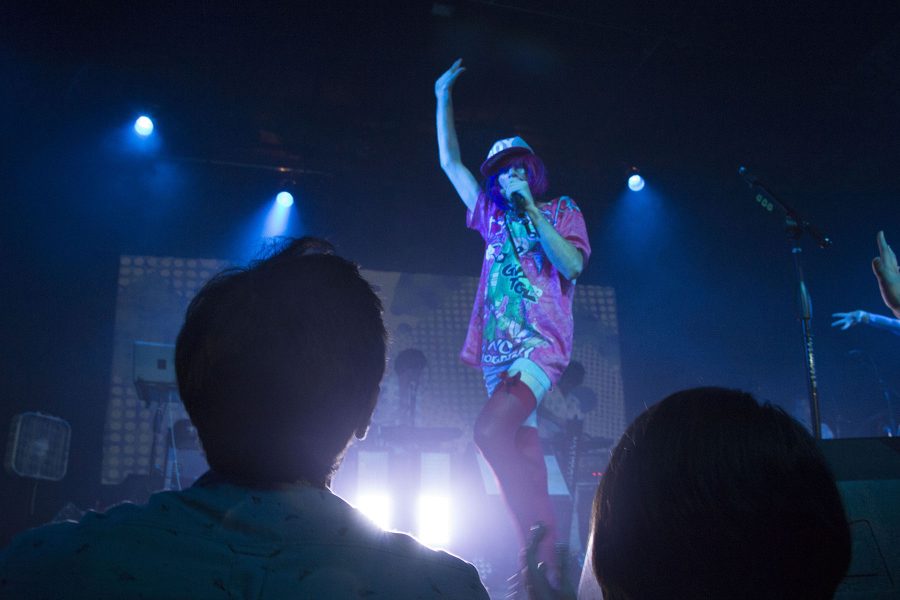 In a flurry of costume changes, dancers decked out in a variety of morph suits and psychedelic backdrops, of Montreal did what they did best last Friday at Turner Hall. Creative mania took over the set in what can be best described as a theater kid’s acid trip — it was absurd, bubbly and glamorous.

“We are TEEN,” the opener announced, the band standing on stage in matching red bomber jackets with even better outfits underneath. The band consists of sisters Teeny, Lizzie and Katherine Lieberson with a plus one Boshra AlSaadi. Their newest release “Love Yes” came out earlier this year. The all-girl act has a sound like 8-bit layered over soft, cooing vocals, staggering bass and charged drums. It’s very delicate, dreamy and ’80s. They opened with their song “Rose 4 U” off of their album “The Way and Color” and played a very hypnotic set. By the end, the lead singer assumed a pose of power, fist in the air while she belted the last song.

Turner Hall always brings an interesting mix of people together. I watched an older man who looked a bit like Einstein bop his head, a group of girls wearing tutus and heavy eyeliner dance and jump around and a school-aged child, wearing a Finn-esque bear hat, grip the edge of the stage.

Some crowd members pulled all the stops to dress up, including cross-dressing.

After intermission, the stage went dark. The members of of Montreal came on stage in all-black, hooded robes, satanic symbols projected behind them and eerie harsh noise playing. Kevin Barnes took front and center, smoke billowing out of his hood.

Someone behind me commented, “Kevin’s dead, y’all!” Suddenly, the band burst into their song “it’s different for girls,” casting off the black robes to reveal all-white outfits, and Kevin’s first look: a white apron, red thigh high socks, a technicolor silk robe, one glove and a knit hat with a glittery flower embellishment. Dancers pranced in morph suits.

They played lots of songs off the new EDM-inspired album, such as “let’s relate,” a song about today’s attitudes towards self-identifying gender and sexuality. Of Montreal pleased the crowd by playing their older songs, like “Wraith Pinned to the Mist and Other Games,” after which Kevin stripped to his underwear and then ran off stage.

He came back wearing a leather jumpsuit and black wig to sing “Labyrinthian Pomp.”

Their sound is always changing, but as a cohesive whole can be best described as an updated psychedelia, funk but ridiculous and bright.

Barnes was the center of attention while the other members wore far less glitter and hid in the back behind their equipment. There would be many costume and wig changes that night. “He changes so fast,” an audience member in a plaid shirt and gripping a PBR remarked, “He’s faster than Gaga, he’s got this on lock.”

The back-up dancers took on a variety of roles as well. At one point, they came out as a giant opossum, which Kevin rode on a saddle. They were demented greasers, cross-dressing policemen, Trump and phytoplankton-inspired butterflies.

Toward the end, they played their righteous breakup song “Famine Affair” in which Kevin declares, “I don’t want you anymore, I don’t love you anymore, go away, go away, go away, you’re a bad thing!” Their encore was a mash up that ultimately ended with a piece of the song they started with, “it’s different for girls.” The concert was a wild experience. If you didn’t know of Montreal, you would still be thoroughly entertained by the whole show they put on, which I think says everything.