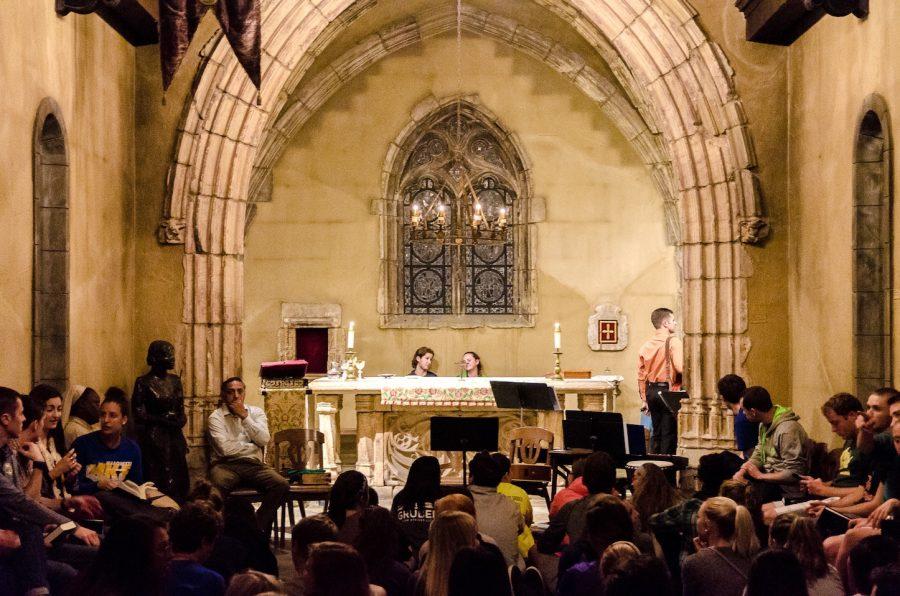 It’s 10 p.m. on a Tuesday and all is quiet on campus. While most students have retired to their dorms for an evening of studying, some are venturing out to attend Mass at Joan of Arc Chapel. Students sit cross-legged, elbow-to-elbow and knee-to-knee on the stone floor, their whispered conversations mingle with the choir’s hallelujahs.

“I think Tuesday night Mass is special because the students make it special,”  Daniel Pederson said, a freshman in the College of Engineering. “You can definitely feel the community at Mass, and the more tight-knit atmosphere allows people to be free about how they’re worshiping God because it removes the inhibitions that oftentimes are associated with a regular Mass.”

Father Kent Beausoleil, who co-presides over Tuesday night Mass with Father Nicholas Santos, first fell in love with Joan of Arc chapel when he was a little boy visiting campus with his family.

“I used to come up to Milwaukee a lot as a child, and one of the things we would do is walk the campus,” Beausoleil said. “I do think…that Marquette has always had a special pull for us. The campus itself, even as a young boy, made an impression on me.”

10 p.m. Mass is held Sunday through Thursday, but Tuesday is generally the most popular night to attend, which Beausoleil attributes to “the tradition, history and the community.”

He also gave credit to the late Father Naus, whom Beausoleil described as charismatic and energetic.

“He would do balloon animals, dress as a clown and was just very affirming and uplifting of the student population,” Beausoleil said. “I think this worshiping community developed around how great those Masses were with Father Naus.”

The building’s namesake, a French heroine and martyr of the Hundred Years War, was convicted of heresy and burned at the stake at the age of 19. Hundreds of years later, she was exonerated and canonized as a patron saint of France. There is an indent in the wall of the chapel, behind the altar, where Joan of Arc allegedly kissed the stone after saying a prayer. Marquette legend has it that, regardless of outside temperature, the stone is always colder than those surrounding it.

The chapel is also home to antique artifacts from all over the world dating as far back as the 1300s, many of which survived periods of war, bombings, airstrikes and invasions. Artifacts include prayer benches from World War II-era Normandy, oil paintings from Germany, bronze Madonna and child figures from Belgium, a crucifix from Italy, candlesticks from Ireland, hand-carved wooden cabinets and doors from England, and a wool tapestry from Kohler, Wisconsin.

“I really like the atmosphere, and there’s a lot more participation in the 10 p.m. Mass,” Emma Adams said, a sophomore in the College of Health Sciences.

“It’s an honor and a blessing because it’s such a lively Mass,” Beausoleil added. “The community is a big part of it. It is student-led, the music is by students and they do the readings. It’s a time for fellowship.”