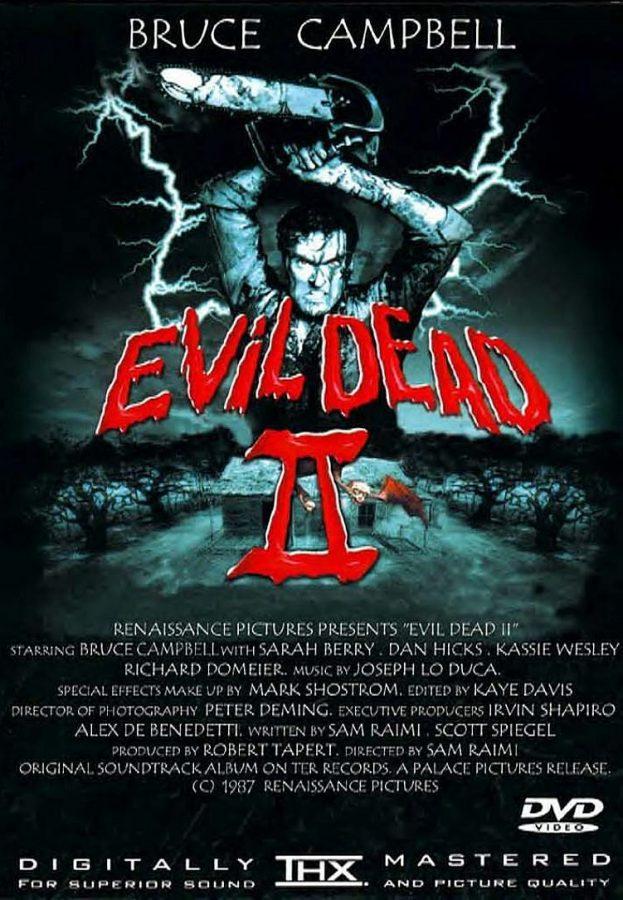 When holidays come around, many families have their own traditions they perform to get ready for the event. Sometimes it’s putting up lights or cooking a delicious meal. Perhaps one of the most prevalent preparations around is sitting down on the couch and watching holiday films. When October rolls around, it’s about time to start watching scary movies in preparation for Halloween.

While there are the favorites such as “It’s the Great Pumpkin, Charlie Brown,” “The Nightmare Before Christmas” and the Friday the 13th films, today I present a different sort of classic. When it comes to Halloween, there’s only one film I have to watch every year — Sam Raimi’s “Evil Dead II.”

To give a little context to this franchise, the first Evil Dead film is a cult favorite. It was produced on a minuscule budget of only $90,000, and it really shows. The movie is rife with bad acting, poor writing, awful costumes and shoddy filming.

Yet, “The Evil Dead” still has a charm about it. Perhaps it’s because it’s so bad, or maybe it’s all the effort that must have gone into making this movie. Regardless, despite the film’s original flop, Evil Dead secured itself a sequel.

The best way to describe “Evil Dead II” is by calling it a parody. The film briefly summarizes the events of “The Evil Dead” in a darkly humorous way before bringing our attention to the plot of this film. Essentially, Ash, played amazingly by Bruce Campbell, just survived an attack by a demon in a cabin in the woods. Despite the death of his girlfriend, he was determined to survive. He fended off demons with his trusty weapons: a chainsaw attached to his arm (after his hand was cut off) and a boomstick, also known as a double-barreled shotgun. The cabin’s owners returned to find Ash in disarray, and together they tried to figure out how to seal away the Evil Dead with a book called the “Necronomicon Ex-Mortis.” The plot was all pretty standard horror fare.

It’s not the plot that makes the movie, though. It’s the writers’ and the director’s tongue-in-cheek attitude that makes the film. The writing ruthlessly makes fun of and parodies the original film, redoing classic scenes with more humorous twists. The special effects are done almost poorly on purpose. From exploding bodies to creepy zombie dances, “Evil Dead II” goes full-out on the cheesiness scale.

The filming is extremely cliche. Many shots are done either in shaky cam, or the classic “crazy angles” of Hitchcock’s horror. One particularly famous scene is known for its goofiness.

The main character, Ash, has just cut off his own possessed hand, and has gone mad. All the objects in the room begin to laugh at how funny his situation is — the books on the shelf, the deer mounted on the wall, even the lamp on the table. As Ash begins to grow crazier and crazier, he starts to dance along with the maniacal pieces of furniture. It’s extraordinarily funny, in the sheer weirdness of it.

Of course, if that were all, this film would be merely funny. It would not have achieved the cult classic success that it had without the amazing “acting talents” of one man, Bruce Campbell. His character had been a shocking success in “The Evil Dead,” and as the only survivor, it was natural he would return for the sequel.

The master of funny faces and maniacal laughter, it is Bruce Campbell’s overly serious and knowingly cheesy performance that makes the film. In truth, this film is also what made his entire career. Without his performance, “Evil Dead II” would simply be another dumpster horror film sequel, along with the likes of “Freddy vs. Jason” or “Alien vs. Predator.”

With a new TV show airing on Starz that continues the Evil Dead story, “Ash vs. Evil Dead,” now is a perfect time to revisit this cult franchise. While never scary, “Evil Dead II” is one horror film that I believe everyone should see once in their lifetime. It’s a little gruesome at times, but the sheer cheesiness and, frankly, the badness of it all makes it worth two hours on a Friday evening. I can guarantee a great night laughing with your buddies if you do decide to pick up and check out this 1987 classic. It’ll definitely be, as Ash would say, “groovy.”