The Wire Explains: The Electoral College 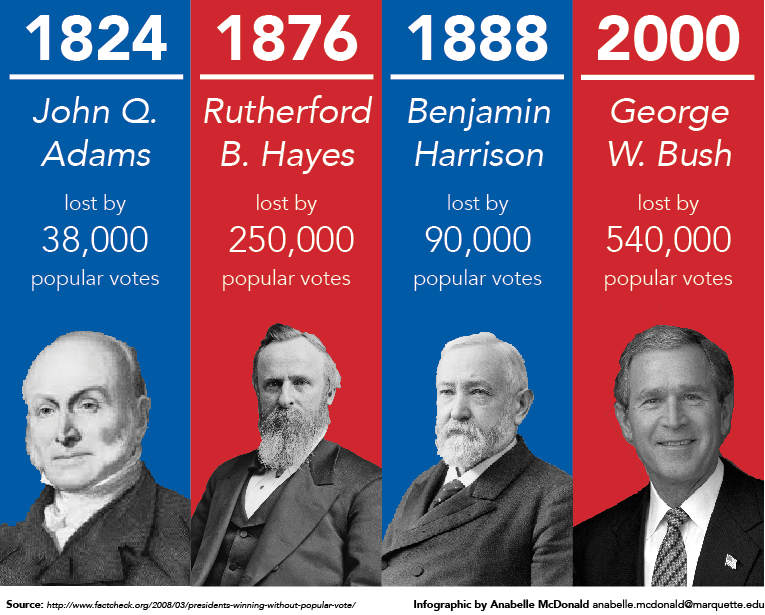 As Election Day nears, the intricacies of what a person’s vote actually means becomes more relevant.

“It is anti-democratic,” said Michael Donoghue, an associate professor in the history department.

The requirements for the Electoral College are outlined in Article II of the Constitution. Each state has as many electors as it has members of Congress. Anyone can be an elector, though it is usually a prominent politician. The only stipulations on who cannot be an elector are: a sitting member of Congress, federal employe or someone who has committed a rebellious act against the United States.

Most states follow a winner-takes-all rule, which means whichever candidate wins the most votes gets all the electoral votes in the state. Only Maine and Nebraska split their votes, giving one to the party candidate that wins the Congressional race, and the remaining votes to the winner of the popular vote.

The American system is not a “direct democracy” because the people elect representatives to lead and make laws, which has led to some awkward run-ins with the public will.

There have been four times in history that the person elected president was not the person who won the popular vote: John Quincy Adams in 1824, Rutherford B. Hayes in 1876, Benjamin Harrison in 1888, and George W. Bush in 2000. Al Gore won that popular vote in 2000 with about 540,000 more votes than Bush.

The system is so contested that there have been more constitutional amendments proposed to change or remove the college than on any other topic (the tally currently hovers around 700). One of these actually took hold – the 12th Amendment which changed the rule that the election’s runner-up would be vice president.

So why have an Electoral College when it could skirt the public will? Simply put, the founding fathers were not about to leave such a big decision up to public will. The system is meant to protect the nation from electing a sweet-talking “demagogue or charlatan,” Donoghue said. Technically, the electors can vote with their conscience, though they are pledged to vote according to their state’s popular decision, and over half of the states have created laws curbing that power. There is no federal law stopping them from voting their mind and no elector has ever been prosecuted from doing so.

“The Electoral College speaks to the skepticism the founding fathers had about direct democracy,” Donoghue said. “They liked the idea of having a bunch of electors who could be appointed in the states – these were often referred to as powerful, the rich and the wise – and they could, in a way, short circuit or subvert the presidential election. The great fear was that a trickster could come along and he could get elected by the popular vote.”

There are many things that have widened enfranchisement over the years, Donoghue said. Letting women and minorities vote as well as the Voting Rights Act of 1965 are among them, but other things set us back, like, arguably, state voter ID laws. Many of the arguments about voter equality come back to the goal of increasing voter turnout.

Donoghue said that the system does cause some voters to feel like their vote does not count due to the electoral system. If a constituent is voting in a strongly red or blue state where the popular vote always goes one way, all the electors would vote for the winning candidate – even if they win by one vote.

In a swing state like Wisconsin, the popular vote is ever more variable and can be the difference between the state’s 10 votes going one way or the other. It’s the reason why Donoghue says everyone should be casting their votes.

“Get out and vote, everyone should participate,” said Donoghue. “Especially here in Wisconsin where it counts, and in your home states.”