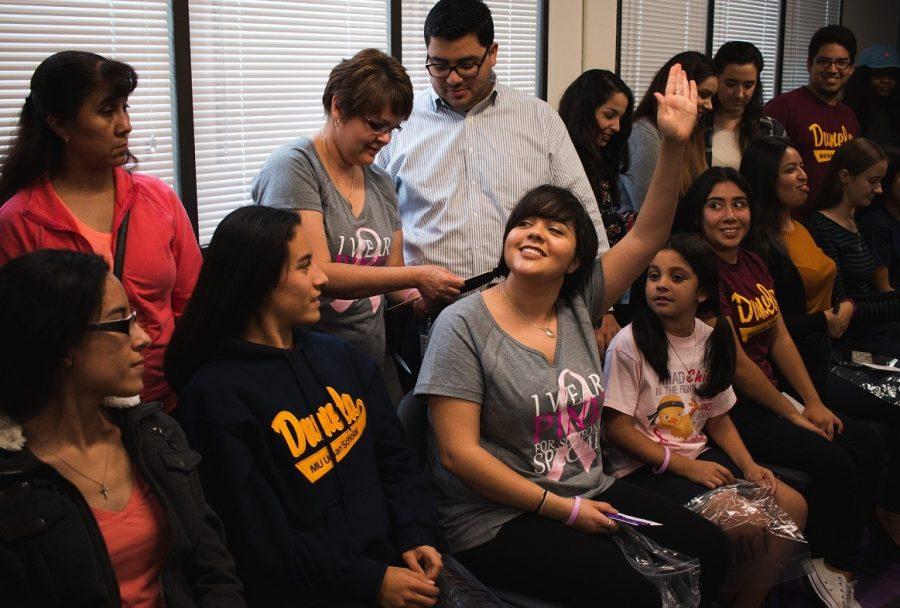 Young women and girls donate their hair to make wigs for cancer patients.

After Carina Belmontes, a senior Urban Scholar in the College of Business Administration, lost her grandmother to breast cancer last year, she turned her grief into positive action. She went to her fellow Urban Scholars with an idea to raise money and hair for women and girls undergoing cancer treatment.

“Because she passed away, I wanted to feel like I was doing something good. I was in such a dark place,” Belmontes said.

Belmontes said she was inspired after her grandmother donated her body to research at the Medical College of Wisconsin.

“She was so selfless that I wanted to do something like that,” Belmontes said. “Because I donated my hair in high school, I wanted to bring that kind of thing to Marquette.”

The Fortunate Choices hair drive, named after Belmontes’ grandmother, Fortunata, was held  Oct. 4  in Coughlin Hall. The Urban Scholars partnered with Pantene’s Beautiful Lengths, an organization that makes wigs and gives them for free to cancer patients.

Fourteen girls, including Belmontes’ younger sister, Clarissa, donated their hair. Donations had to be at least eight inches, straight, with no bleaches or dyes. The longest donation was 12 inches.

“It’s a way to contribute to society and be selfless,”TJ Humes, a freshman in the College of Arts & Sciences and a member of the planning committee, said.” A lot of girls were considering cutting their hair in the first place, but this is another option that helps people.”

Some of the girls were inspired to donate for the same reasons as Belmont’s, the personal family connection to cancer.

“When my grandma had cancer I noticed her hair falling out, and she would always tell me, ‘Oh you have such beautiful hair.’ Her telling me how beautiful my hair was, other people always commenting on my hair, I never really noticed (my hair), so why not cut it? Why not give it to somebody else?” Diana Mandujano, a freshman in the College of Arts & Sciences, said.

Daisy Oceguera, a sophomore in the College of Arts & Sciences added, “Thankfully I don’t have anyone in my family who has had cancer, but I’ve seen how it affects my friends and their families, so I understand that it can be really hard to lose your hair. It’s like you’re losing part of yourself.”

While other girls said they were not particularly motivated to donate by someone they knew who has battled cancer, they wanted to contribute to a good cause. Although she could not donate her hair at the time, Laura Hernandez, a freshman in the College of Business Administration, said she understands the emotional connection some people have with their hair.

“People who are going through this rough time in their lives lose confidence,” Hernandez said. “Hair gives you a lot of confidence, so helping them gain the confidence they’ve lost is a good thing.”

Belmontes noted beyond gathering hair to be made into wigs, the purpose of the hair drive was to raise awareness about donating hair.

“A lot of girls commented to me, ‘I’ve always wanted to do it but I never knew how’ so that awareness we’ve been able to bring to campus and say, ‘it’s really that easy,’” Belmontes said. “So now hopefully we want (the hair drive) to continue and people will be informed about it. If they couldn’t donate their hair this year, they can grow out their hair and donate it next year if they want to.”

In addition to donating hair, there was cookie decorating and card making for hospitalized children. Humes said the Urban Scholars also wanted to promote community and make the event enjoyable.

Overall, Belmontes, who also donated her hair at the drive, said she was happy with how the event turned out.

She said, “What’s most rewarding is seeing the excitement. Seeing that they care about the issue, that they’re willing to donate hair and donate money.”

If you would like to donate to the Fortunate Choices cause, visit their GoFundMe page.