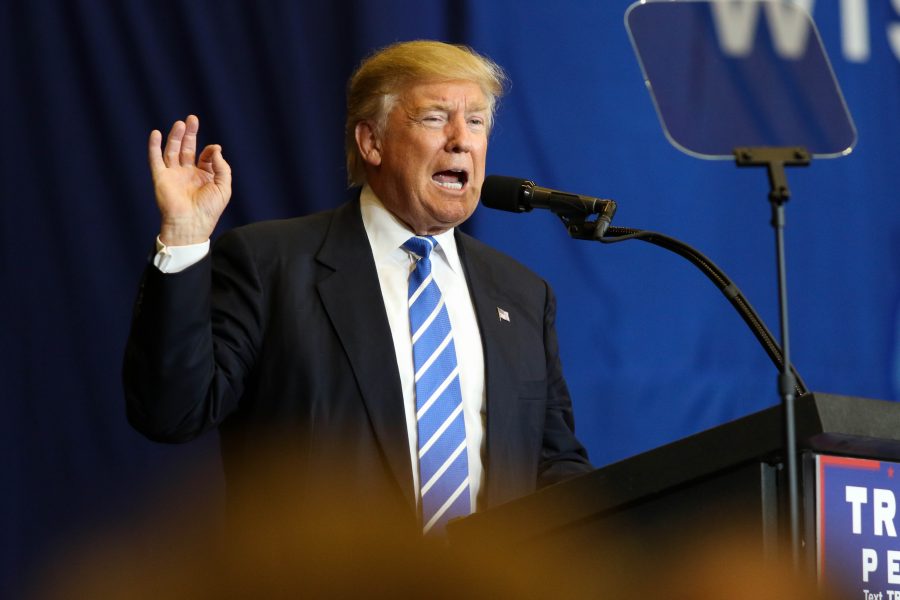 Donald Trump addresses his supporters at a rally in Waukesha last year.

I’ll admit that I laughed the first time I heard the recording of Donald Trump saying, “Grab them by the p—y.” Throughout this electoral season, Trump has provided ample entertainment with his ridiculous, false and deplorable statements. But his statements are not funny, not anymore.

While The Donald owned his 2005 statements and apologized for them, he also rationalized them as “locker room talk” and tried to use Bill Clinton’s infidelity to impugn Hillary’s character.

The horde of Republicans withdrawing their support from his campaign feels a bit disingenuous. We knew the nature of Trump’s character well before the release of the tape. A cursory Google search will make it clear that the man is an amoral bully. A single episode of “The Apprentice” shows he is sexist. They knew, they simply didn’t care.

Any man who has spent any time alone with other men has probably heard some pretty disgraceful things said about women. They may have even said some things themselves. Usually, these things are couched with insincerity and are rarely taken seriously. Most people grow out of this type of immature behavior around high school.

What Trump said to Billy Bush in the “Access Hollywood” tape cannot be condoned in any context. What he said went beyond irreverent, sexually charged locker room banter. What’s worse, by invoking the vague notion of “guy talk,” Trump is contaminating all men with his misogyny. After all, if it were just guy talk, that means all men do it, right? Wrong.

I am not some prude. I attended an all-guys middle and high school where locker room banter happened every single day. I can say with certainty that nobody ever bragged, joked or even hinted about non-consensual sexual activity. It’s something you just don’t do. Even then, if someone went too far, there was always someone else who called him out on it.

As a man, Trump’s statements embarrass me. They are a stark reminder of the times I have failed to treat others with respect, to see them as humans who live equally complex, important and thoughtful lives. For many men, his words recall an awkward and immature time in their lives. But unlike Trump, we grew up. We developed relationships with women based on mutual respect. We learned to empathize with each other.

If this were an isolated incident, it would be horrible enough, but this is especially disturbing in context with Trump’s past statements and alleged sexual misconduct. Even worse, a day after the “Access Hollywood” story broke, Politico reported that Trump told Howard Stern he could call his daughter Ivanka “a piece of ass.” If this is Trump’s attitude toward his own daughter, imagine what he would be willing to say about your girlfriend, sister, coworker or mother.

Donald Trump isn’t trying out for some prep school lacrosse team, he’s running to become the leader of the free world. How can we expect a man who doesn’t see half the country as human to faithfully uphold the law? How can we expect a philandering narcissist to represent us on the world stage? We can’t, because Donald Trump is unfit to run a bake sale, let alone a country.