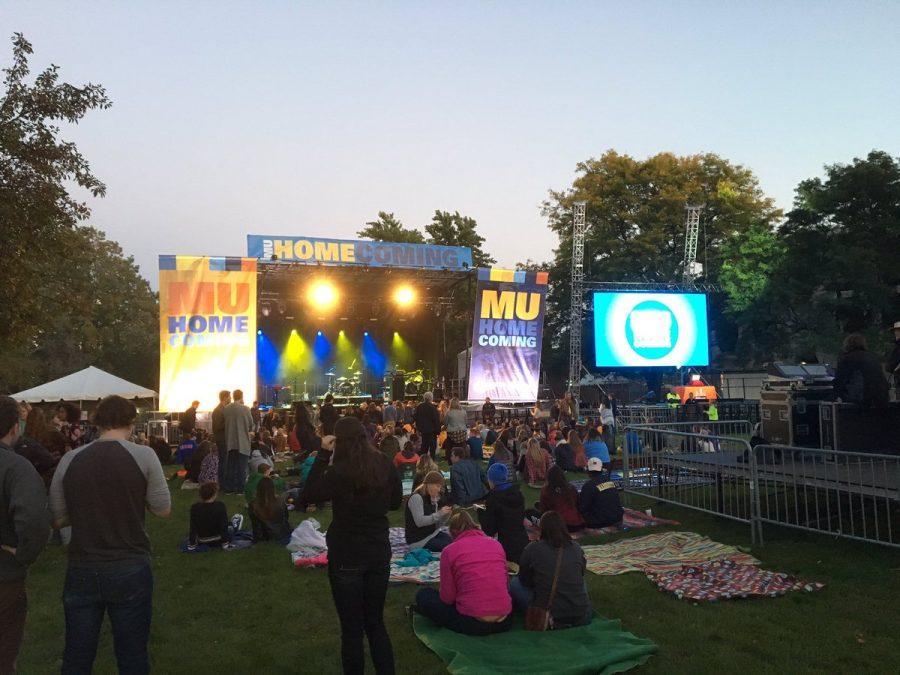 People gathered in front of the stage in Central Mall before the show. Photo by Jimmy Drenovsky

Central Mall on campus got a little makeover. Before you could even get in to that area, you had to go through a ridiculous process of security, where they complained about whether your bag was too big or not. But once you were in, you could see a plethora of food trucks, giving your stomach too many amazing choices to choose from. There was a henna tent, where you could deck out your skin in fake tattoos. There was a beer garden with choices of MillerCoors beers for you to drink throughout the night. The most important part of this makeover was a huge stage. The sides were lined with “MU Homecoming” signs. Last night was what the school has been anticipating all semester.

Rachel Platten and American Authors made it to campus and put on one hell of a performance for Marquette students, faculty and alums. People filled Central Mall to check out the school’s first Homecoming concert. Marquette Radio staff were some of those people, so below we shared our thoughts on the show:

We weren’t exactly excited that these two were coming to perform for Homecoming week. We were hoping for someone bigger and better and more in our realm of music taste. However, we were more enthused by the concert as the show went on. It was not our cup of tea, but it turned out to be a lot better than expected.

To us, American Authors were the most impressive and the crowd pleasers of the night. Right, as they got onto stage, they had such high energy that got the crowd pumped up. Their first song, “Go Big or Go Home,” started strong with a prominent feature of a banjo and a great drum solo. This had the crowd jamming out, dancing and ultimately making them have a good time right from the beginning.

People weren’t just excited about the music from the start, the atmosphere also brought some excitement. During their set, the lights were blue and yellow, radiating Marquette pride. This pride was also shown when the lead singer showed up wearing an MU scarf and started our chant, showing that him and the rest of the band fit right in with the rest of us.

The band also premiered a lot of new songs, which made everyone want to pick up their album and give it a listen. Because in all honesty, whether the song was slow or fast, American Authors made it fun and pretty much nailed every song they performed. The singer has such a clear, crisp voice, so we would all listen to him sing pretty much anything. They really just do their thing on stage and try to make it a fun experience for everyone. The band got the crowd involved by having us sing lyrics with them, which added to all the fun. They have been to Milwaukee many times, but they said, “I think Marquette takes the cake.”  They enjoyed being there as much as we enjoyed having them.

Highlight: The highlight of their set for us is when they sang their hit, “Best Day of My Life.” Not only was it a song that everyone knew and could sing along to, it also was when crown involvement was prominent. We got to chant “PBR,” paying tribute to Pabst Brewing Co. down the road as well as Marquette, which is obviously everyone’s favorite thing to do. Ultimately, it made us have fun to show our pride for our school and city.

Best song: “Believer”: At the beginning of this song and throughout, you could hear their beat being interlaced with MGMT’s “Kids.” As fans of MGMT, we like how it added a twist to their song and really got the crowd dancing.

Ranking: 4 out of 5 stars. Was it the best concert we have ever been to? No. Would we pay to see them in concert? No. However, after seeing them, we were quite impressed by their performance. It was not who we were hoping to see at our Homecoming concert, but it was a little better than what we expected, and we all had a good time listening to them.

As soon as she started, we thought she would work better as an opener instead of the headliner.  Her first song “Beating Me Up” was not really the best pump up song. As she sang it, she really was just performing and not trying to get us excited or interacting with us.

She didn’t have as much energy as American Authors, and a lot of her songs were slower, which made them harder to get in to. American Authors pumped us up had us dancing and jumping throughout their set. Through Platten’s set, we all just kind of swayed and listened to her sing. She eventually picked up the energy and crowd interaction, but it took a while for her to get there.

However, her singing is 10 out of 10. Between the two, she does take the cake on vocals. She was quite the talented lady with being able to sing, but also beatbox, play guitar, rock it on the keyboard and dabble a little in drums.

Her band was also impressive. One of them started playing a keytar, which was pretty badass to us. You don’t see that typically in other bands. We also loved the drummer. He was our favorite band member. He was a lot of fun and really just great at his instrument. He killed it whenever he had a drum solo. We also enjoyed the overall chemistry her band had. You could tell that they really love playing together. They would jam out, dance around and belt out the lyrics. They all show a mutual passion for what they do, which we could appreciate.

Her crowd involvement was nice as well. She taught us lyrics and had us sing along with her. At some points, she would take the microphone away and just listened to us sing. This made the show feel more intimate since we could all be a part of the performance. She closed the show during her encore with the song we were all waiting for, “Fight Song,” which made the crowd go wild. Before she left the stage, she had us chant, “We are Marquette,” leaving the night on a good note.

Highlight: For us, we really enjoyed when she covered Justin Bieber’s “Love Yourself.” She brought students on stage with her to have them sing along since that was once her dream as a college student. It was fun to see our friends and fellow classmates having a good time singing along with her. However, what we enjoyed the most about this moment was her revealing her hidden talent of beatboxing. She totally impressed us.

Ranking: 3.5 out 5 stars: Like we mentioned, she wasn’t as great as American Authors, but she didn’t necessarily disappoint. With really our only impressions of her being her two hit songs, she really impressed us. She was a lot better than we expected and put on a pretty good show.

HIGHLIGHTS OF THE NIGHT

7:20 p.m.: President Lovell takes the stage and tells the crowd, “We have four pillars as a university, and tonight, I want to add a fifth one — fun.”

7:23 p.m.: The lead singer of American Authors comes out with MU scarf. Everyone at MU now loves him.

7:25 p.m.: One song into American Authors, people are already loving the banjo.

7:52 p.m.: American Authors talk about hometown pride, and then try to test our pride for MU and starts a Marquette chant … no worries, we passed.

8:57 p.m.: Someone throws a flannel shirt at Platten right as she begins her first song.

9:02 p.m.: Platten tests out the Marquette chant, and we, of course, impress once again. The musicians here love this.

9:09 p.m.: Platten tells the crowd, “Nothing has ever been thrown at me before. I probably should have been embarrassed when that happened, but I was so excited. Is that weird?”

9:18 p.m.: Platten tells us a story about how she used to want the microphone when she was at shows when she was younger, so she gives the opportunity to sing with her on stage to “Love Yourself.”

9:54 p.m.: People chant, “Fight, fight, fight.” Hoping this would bring Platten back on stage to sing “Fight Song,” not to start a brawl in the crowd.

“What We Live For”

“Shut Up and Dance” (Walk the Moon cover)

“Best Day of My Life”

“You Don’t Know my Heart”

Here all these songs in our playlist: