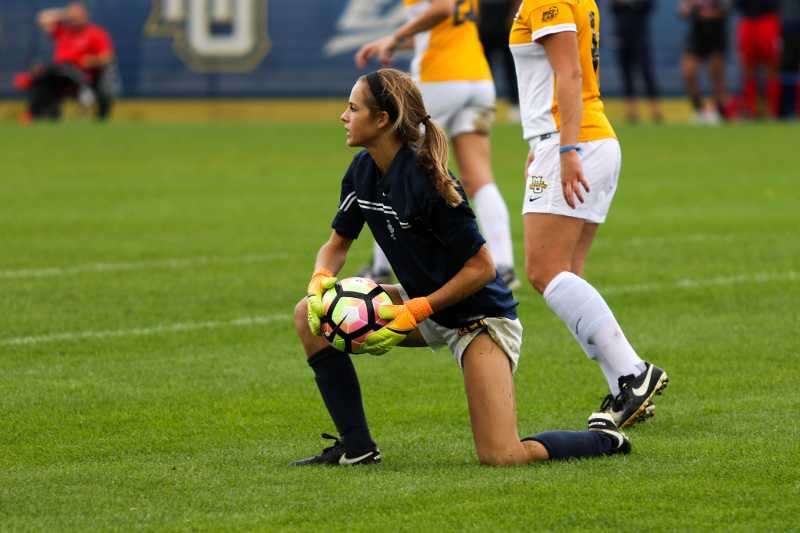 Marquette women’s soccer continued their dominance over Xavier on Thursday night, winning 1-0. The victory moves the Golden Eagles to 5-0-0 all-time against the Musketeers.

Leah Celarek notched the only goal of the contest in the 40th minute with a left-footed strike from 25 yards out that went in off the crossbar. It was the sophomore’s first career goal.

The Golden Eagles had nine shots in the first half, a few of which nearly broke the deadlock before Celarek’s powerful curler.

Darian Powell missed an empty net after Carrie Madden beat Rachel Piccus to the ball and crossed it in to Powell who had two defenders on her back. Meegan Johnston beat the keeper with a left-footed strike later but the ball rolled just a foot wide.

Xavier missed a golden opportunity to go ahead in the 18th minute, but Kenadie Carlson missed the net on a breakaway opportunity.

Xavier found some offensive flow in the second half, forcing Maddy Henry into action.

The freshman keeper picked up one of her two saves when she denied Xavier’s leading scorer Samantha Dewey. Henry plucked the ball from Dewey’s feet eight yards away from the goal after Carlson played a nice ball across the box.

With 10 seconds remaining Xavier was unable to muster an attempt on goal from a free kick near the corner and the final whistle blew.

The game was played at NKU Soccer Stadium at Northern Kentucky University due to flooding on Xavier’s campus in August that required them to tear up their turf field.

The Golden Eagles have scored 13 goals in their last six games. This is the first time in that stretch where Marquette hasn’t scored twice. For the sixth straight game Marquette scored first.

Since inserting Ryley Bugay into the starting lineup Marquette has allowed just one goal in three games compared to seven in the previous three matches.

Maddy Henry picked up her second career shutout after earning her first on Sunday.

The Golden Eagles are 5-1 in their last six games. This is their first three-game winning streak in 2016.