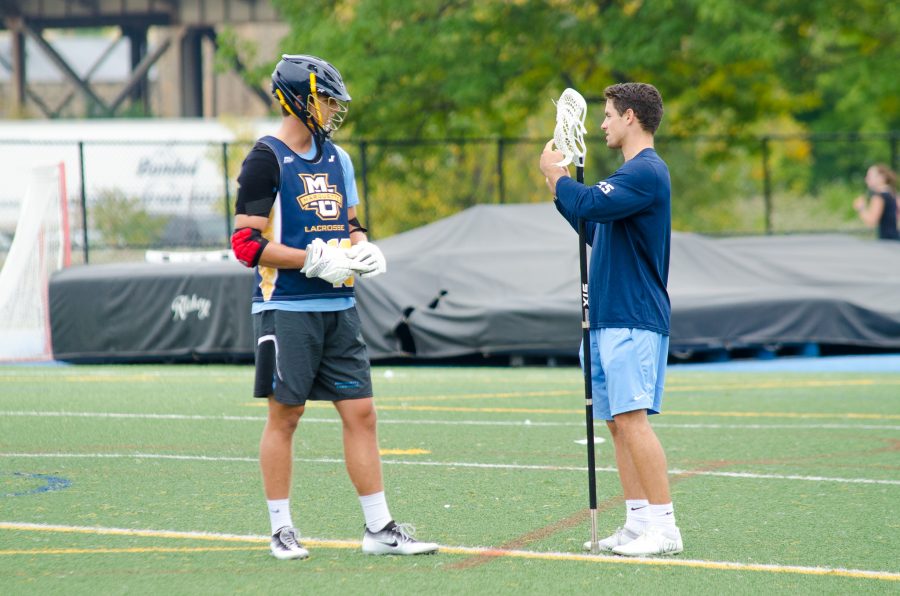 When Marquette men’s lacrosse had coaching positions to fill this summer, Joe Amplo looked in-house. He brought in two of the best players in the program’s young history, hiring Jake Richard as a defensive assistant coach and B.J. Grill as the director of lacrosse operations. Who better to be an advocate for the program than those who have been a part of it?

“I always say to parents and players if they have any questions about the student athlete experience, I just graduated,” Richard said. “We don’t try and hide anything. … We want them to love this place for what it is and for what it’s not, and I’m able to say exactly what that is because of my experience.”

Richard wasn’t planning on becoming a coach straight out of college. He was set to head out to California to search for a sales job, and planned to build up his coaching resume through playing professionally. Then he got a call from Amplo.

“He said, ‘I’ve interviewed a ton of guys. They’ve been good, but none of them have really compared to you. Do you want to coach here?'” Richard said. “I never thought I’d get a job this young.”

As for Grill, he has one year left in graduate school, so he was going to be on campus anyways.

“I thought I would have a role with the staff no matter what,” Grill said. “I just didn’t think it would be a full-time position, which makes this so much better. This is something I can put on my resume and gives me legitimate experience rather than just being a guy who volunteers sometimes.”

Both Richard and Grill face challenges as they adjust to their new roles. Richard is working with a rather inexperienced group. With the graduation of Grill, Liam Byrnes and Tyler Gilligan, the only player on the defensive group with any game experience is Nick Eufrasio.

He’ll also be replacing last year’s defensive coordinator, Andrew Stimmel, who led the Golden Eagles to a top-10 scoring defense last season. He left to take a job at Yale.

However, Richard won’t have to put together all the pieces by himself. Amplo is a defense-first coach himself, and Richard expects he’ll be running Amplo’s defensive scheme.

“(We’re) absolutely continuing what we have,” Richard said. “Defense is best when it’s simplified. To complicate it would just cause more headaches than we already have. Everything I know about defense is everything Amplo has taught me.”

While Richard’s job is on the sidelines, Grill is doing his work behind the scenes. His duties include things like booking the flights and setting up everyone’s calendars.

“The back end stuff is humbling,” Grill said. “It’s different not being out there every day and competing. … It’s offering me a new opportunity to see what kind of person I have to become if I want to make this my career.”

Grill doesn’t know how long he’ll be in his position, or working in lacrosse at all. Although he thinks he’d be a good coach, he doesn’t want to take what he feels is the easy way out. He’s currently going for his MBA, and once he gets that he’ll have a decision to make.

It’s traits like that that made Grill and Richard a fit for Amplo’s program as players and now on his staff, too.

“It’s the best thing that’s happened to us,” Amplo said. “In transition, we’ve come out golden.”