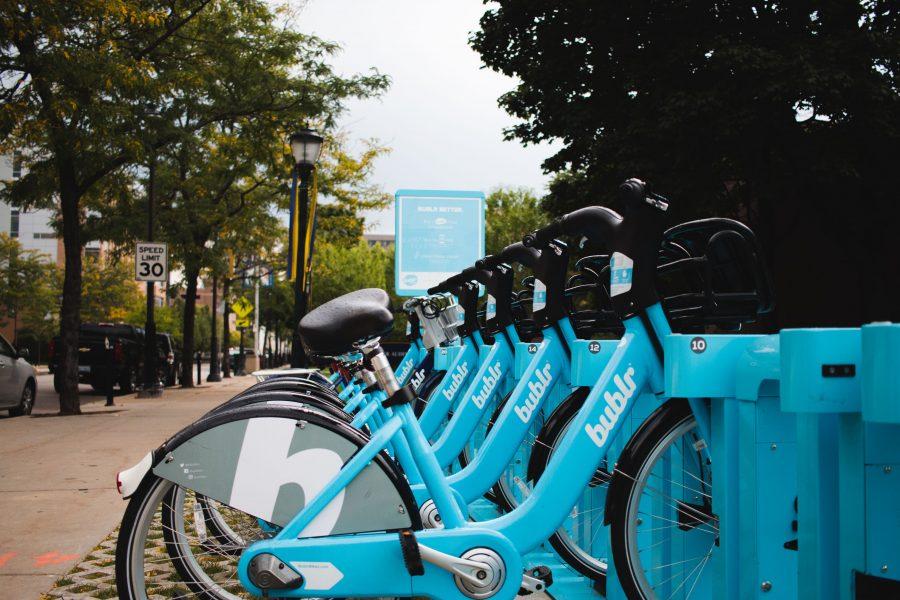 The Bublr bikes are popular among students looking to quickly and easily get around.

After Marquette University Student Government’s long and hard-fought campaign to get a Bublr Bike station on campus, there is now evidence the blue bikes have been put to good use.

Milwaukee’s Bublr Bikes sharing company, which offers bicycles that can be rented and returned at any affiliated station, earned significant demand on campus. According to the company’s count, since the bike station was installed on 16th and Wells streets last April, 2,609 rides originated from the station, making it the fifth most popular station in Milwaukee.

“We always hope more people ride, but we are happy with the usage at Marquette,” James Davies, Executive Director of Bublr Bikes, said. “I think students use Bublr Bikes because they want convenient, sustainable transportation.”

Many students said they favored Bublr Bikes over the Milwaukee County Public Transit System and taxi services like Uber and Lyft.

“It’s a lot easier than taking a bus or an Uber,” Luis Herrera, a junior in the College of Business Administration, said. “You’re able to explore parts you otherwise weren’t able to get to. It definitely increases the ease.”

Amanda DeJesus, a freshman in the College of Arts & Sciences, also praised the carefree nature of the bikes.

“You can get from one place to another and you don’t have to worry about which bus to catch, missing the bus or waiting for the bus,” DeJesus said.

Another advantage appreciated by students is the ability to use a Bublr Bike at any hour.

“I rode them at night and they had a spotlight on the front, so that was cool,” Annie Dejart, a freshman in the College of Arts & Sciences, said. “It’s nice because we were downtown and we had that option to get us back home even though it was late.”

But regardless of the time of day, students should be prepared to pedal.

“I would (use Bublr Bikes) again in the future, but they’re not necessarily great quality just because they are only set on one gear,” she said.

Despite the low gear setting, Bublr Bikes for $3 per half hour can be a money-saving alternative in addition to being convenient.

“It’s a lot cheaper than using an Uber or a Lyft,” Grace Dooley, a freshman in the College of Communication, said. “It’s definitely a lot more efficient.”

On the other hand, Dejart disagreed with Bublr’s price point.

“It was kind of a bit more expensive than I thought it would be, but it was still a good experience,” she said.

For many students, it is the experience that makes the Bublr Bikes special.

“I like (having a Bublr Bike station) on campus because I have the option to go on spontaneous adventures to get exercise and explore Milwaukee at the same time,” Dejart said.

Cycling offers a unique way to see and get to know the city, DeJesus said.

Although there are mixed opinions on the price and quality of the bikes, students appreciate the overall convenience and transportation opportunities available with a centrally located station, and the wanderlust is making more students get out there.

“It really connects you to different points around Milwaukee, and it promotes students to get out and about and explore,” Herrera said.