Tacocat grooved to their feminist tunes at Cactus Club 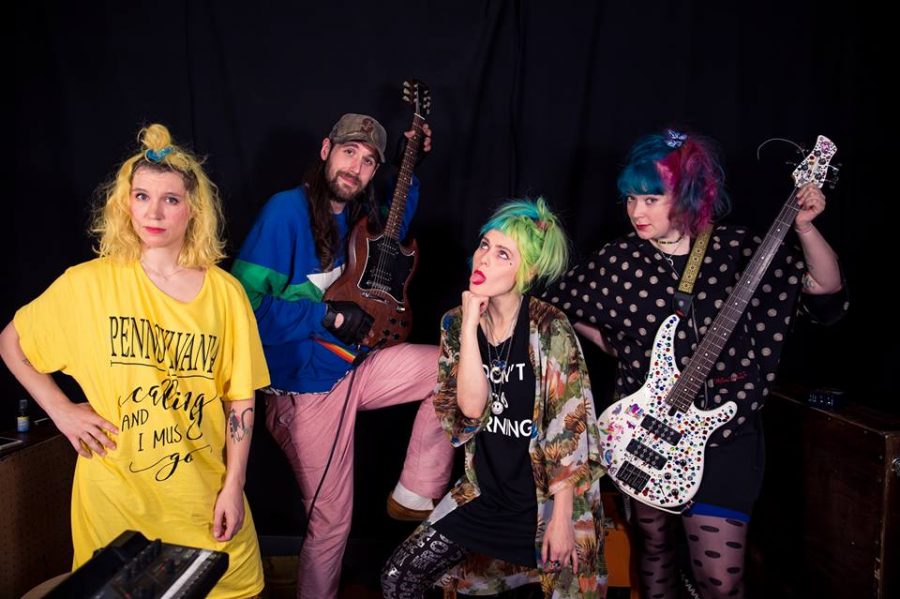 Tacocat was at Cactus Club last night. And no, there were no tacos or cats involved. It was instead a feminist punk band that rocked Milwaukee.

The venue of Cactus Club occupies a smaller space, but that didn’t stop fans from piling in to catch the show. Local Milwaukee band, the Pukes, took the stage first. Their high-energy punk sound set up the night well, and they even pointed out what everyone was thinking, “Tacocat backwards is tacocat,” which pumped the crowd up more for the headlining act.

Dude York came out next. Their punk sound had a funk undertone, giving the venue some groovy tunes. This made the crowd get on their feet, so they could get down and boogie. This warmed up the crowd well as Tacocat began to take the stage.

These first two bands were fun. Everyone was enjoying them, but Tacocat was truly the highlight of the night. They came on stage and immediately changed it up and made it their own. They created their own Tacocat sign and hung it up on the back wall to spice the place up.

Their original guitarist, Eric Randall, hurt his arm, so he had to pass on this performance. Luckily, the singer and guitarist, Peter Richards of Dude York, spent six hours learning their songs and filled in. The three girls of the band, Emily Nokes, Bree McKenna and Lelah Maupin, added sparkles to his face to have him fit right in with the rest of them. His guitar playing and stage presence later showed he could truly be a part of their group.

The group opened the show with their hit, “Cat Fancy.”  Right from the start, the band had vivacity, making the crowd go wild. All the audience members were boppin’ their head, jumping around and having a great time.

However, lead singer Nokes was having the most fun for sure. As she shook her tambourine and belted out lyrics, she wasn’t afraid to dance around the stage. She swayed and moved her body in an odd fashion, but it just made her personality shine through more. At one point, she even brought out the macarena, giving everyone a good laugh. She was just being herself on stage, and it was refreshing and enjoyable for everyone.

They sang a wide variety of their tunes that spanned over multiple albums like  “Bridge to Hawaii,” “Volcano” and  “Crimson Wave.” Between the songs, they announced what the song was and the story behind it. This gave the audience a deeper look into their lyrics, made it easier for them to connect to the songs and let them listen to the fun, witty banter between the bandmates.

Some songs were more fun and relatable. For instance, “Horse Grrl” is about going through your horse girl stage as a teenager. Some showed an important message and fully embraced their girl power like, “Hey girl,” which is a song about street harassment. While some songs, brought out the inner teen angst in us all like, “You can’t fire me, I quit,” a song that focuses in on getting broken up with.

Their songs, however, ultimately brought you back to 90’s nostalgia with their punk sound. Watching them perform made me want to whip out my distressed band tee, choker necklace and flannel. It was fun to feel like you traveled back in time to those days of grunge.

The band closed the night by taking a selfie on stage with their selfie stick and playing their song, “I hate the weekend.” The crowd went wild and were screaming for more. the band stuck around on stage to give the crowd one mini encore, and then they exited the stage for the night.

Tacocat was a much-needed addition to Milwaukee’s punk scene this weekend and left us all wondering when they will return to MKE once again. For now, we will all play the heck out of their songs on Spotify and anxiously await to see them on the lineup for Cactus Club once again.