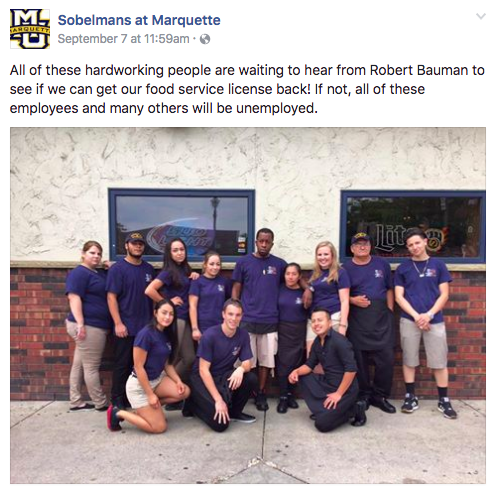 Sobelmans effectively used social media to win the support of the Marquette community.

The dispute between Sobelmans owner Dave Sobelman and Milwaukee 4th District Alderman Bob Bauman last week is one of the most interesting and entertaining stories I’ve seen in my time working in student media.

After failing to show at a mandatory Common Council meeting to renew the establishment’s food and liquor licenses, Dave Sobelman received news that he would not be able to get new licenses until Sept. 20, putting him and his nearly 40 employees at the Marquette campus location out of business for two weeks.

At this point, most people would just admit the mistake and plead for a temporary license. While Sobelman did admit his mistake, he also decided to call Bauman a “prick” and swagger on TV about potentially continuing to serve food in defiance of the law.

You might be asking yourself how a person gets such a favor by insulting the one person who can help him out. Sobelmans and its employees, many of them Marquette students, executed an extraordinarily effective and well-thought-out social media campaign that framed Bauman in a negative light and created vocal pressure to reopen the restaurant.

The alderman relented after Sobelmans co-owner and Dave’s wife Melanie Sobelman wrote him a letter asking for a temporary food license and offering to donate a dollar from every burger sold until the Sept. 20 meeting.

Sobelmans was able to quickly frame the issue around the fact that its employees were about to lose two weeks of pay. This was the restaurant’s strongest defense, but it completely disregarded the spat between Sobelman and Bauman. Employees posted photos of the empty restaurant with captions about how they were going to struggle paying rent that month after missing two weeks of work. Their friends and family helped disseminate these posts by liking and sharing them across social media, strengthening the narrative.

Another distinction that drew public support to Sobelmans is the restaurant’s stature at Marquette. Sobelmans is our sports bar. It supports our clubs, hosts our fundraisers and for some of us, helps us celebrate our 21st birthdays. It’s a Marquette institution. Sobelmans is part of our community and we are naturally going to err in its defense. If the same thing happened to any other Milwaukee restaurant, would anyone on campus care?

Once again, Sobelmans’ strong social media presence plays a significant role in establishing itself as a campus icon. For the restaurant’s five-year anniversary at the Marquette location, it released profiles of many of its employees on social media. It recently named its “Big Mike” burger after Marquette senior Mike Baudhuin. These are the types of things that garner goodwill and get people on your side.

Let’s be clear, this entire situation is Dave Sobelman’s fault. As a business owner, you have a responsibility to your employees. If you receive a letter telling you to go to a meeting for the city, you go to that meeting. If you make a mistake and lose your food and liquor license, then that’s on you, not the alderman doing his job. Maybe you think the system is designed unfairly, but the time to complain and showboat is not right after you have very clearly messed up.

Sobelmans’ ability to work the system in this way is just the latest in a series of fascinating examples of social media’s ability to influence the real world. Sobelmans did an excellent job of leveraging its social media brand identity to get what it wanted, despite being in the wrong.