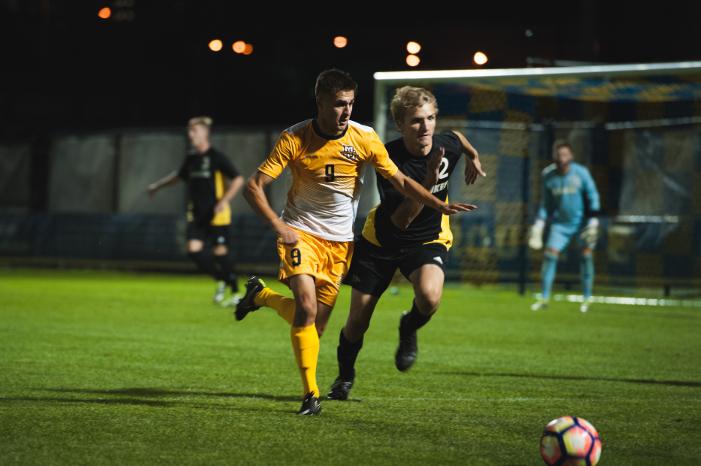 Daniel Szczepanek scored his first two goals of the season in the first half.

It looked like the Golden Eagles would glide to a victory and a third-straight year with the Milwaukee Cup after the first half an hour. After two goals from Daniel Szczepanek and a great transition strike from Connor Alba, Marquette had UW-Milwaukee right where the Golden Eagles wanted them.

Although Marquette does now retain the Cup, it didn’t exactly go according to plan.

UWM scored three straight, including a devastating own-goal by Danny Jarosz in the 86th minute, to play Marquette to a draw for the second season in a row.

“There were times we looked immature,” Bennett said. “Tonight, we looked inexperienced.”

Since the Golden Eagles have the last victory of the series in 2014 the trophy remains on Marquette’s campus. It’s the first time the two teams have tied in back to back years in the 44-year history and it’s tied for the second highest scoring output in a Milwaukee Cup game.

Everything went right for the Golden Eagles early on, as the team dominated possession and had the goals to show for it. Szczepanek scored his first goal since 2014 in the 15th minute, beating UWM keeper Sam Glass far post. His second came in the 27th, when he headed in a perfect cross from Patrick Seagrist.

UW-Milwaukee’s comeback began in the 34th minute, as Evan Conway capitalized on a failed clear by goalie Mac Wheeler to score his first of the night.

“Their first goal, they scored it by pressing,” Szczepanek said. “After that they started pressing us a lot more. It was a little more difficult to play out.”

Bennett said Conway’s first goal gave the Panthers something positive to take out of the first half. He took the blame for making a handful of substitutions after going up by three, including taking out John Pothast for Jack Alberts.

“Had we gone into the halftime 3-0, I think that closes them out and we can make some adjustments to close out the game,” Bennett said.

Conway scored his second about 25 minutes later, finding the far corner on a shot from the top of the box.

The equalizer came after a steady attack from the Golden Eagles over the previous 10 minutes. The Golden Eagles were killing the clock in the best way possible, by not allowing the Panthers to have the ball. That all changed when a UWM possession led to an opportunity for Evan Dujardin in the right corner. He fired a cross into the box, which found Jarosz’s shin and rocketed into the net.

“It’s soccer,” Szczepanek said. “You can have all the possession in the world, but all it takes is one moment.”

“It’s hard for me to comment without getting myself in big trouble,” Bennett said. “I think that we have to accept the referees calls. I also think that one of the biggest things we can do to improve the game is make sure we’re all on the same page.”

There’s a possibility that Ruben Sanchez, who hasn’t started since suffering an injury in the opener against Kentucky, could take his spot.

The start of BIG EAST play also means Bennett will be committing to a starting goalie. He said he and goalkeepers coach Jon Mroz will make the decision by Friday. Both goalies have started three games. Wheeler hadn’t given up a goal until tonight. He’s made five saves. Luis Barraza, who made one relief appearance for Wheeler in addition to his starts, has given up seven goals and made 10 saves.