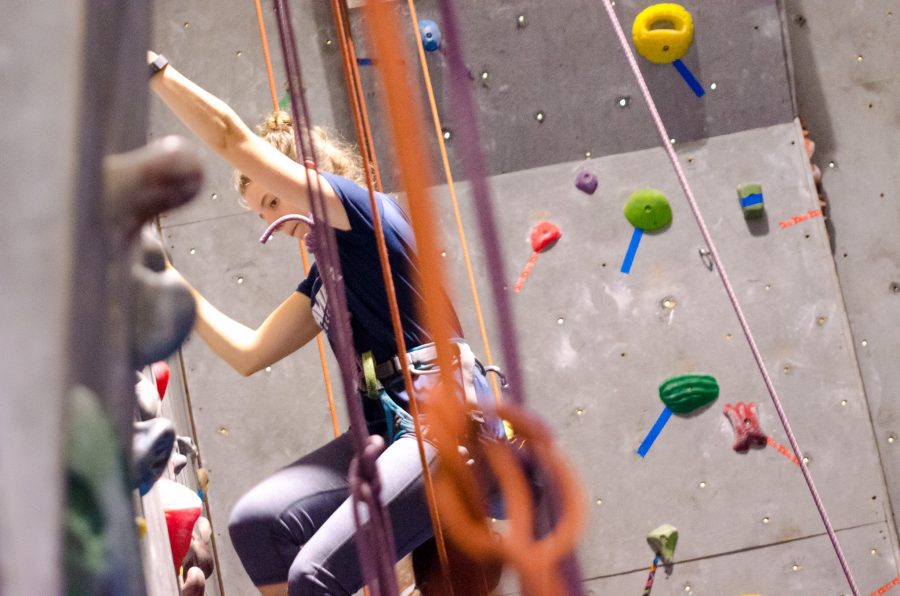 Jessica Taylor, a graduate student, is one of a large contingent that is taking up rock climbing.

When many students think about club sports, they think about the conventional ones like basketball, baseball or volleyball. But one of Marquette’s off the wall club sports is also one of its biggest — the Marquette University Rock Climbing Club.

Junior Alexander Zucca, the club’s president, co-founded Marquette rock climbing during his freshman year. Since then, he’s seen an explosion of interest.

“It started out with probably 10 to 12 of us, and then after the first O-Fest, we grew to probably 50 and we’ve been growing a lot ever since then,” Zucca said. “We were just at O-Fest and I think we got like 250 new people interested in it, so we got our first meeting coming up and I think we’re going to be in the 100-150 member range.”

“Within two years it’s pretty impressive. I didn’t think it would be this popular, it’s definitely a surprise.”

Senior Charlie Bieser, who is entering his second year with the club and first as an e-board member, gave a variety of reasons for the rapid growth of the club, especially emphasizing the culture and tone of the club.

“I think people are drawn to it because it’s an activity and because it’s the most safe extreme sport,” Bieser said. “You have the, say, ‘illusion’ of safety with the rope, but most of the time it’s not an illusion at all. You’re not really ever going to stress that gear enough to fail and not be safe enough for you to climb, and it also helps that we’re not really very demanding.”

“We’re a very relaxed, very laid-back group and people and laid-back team. It’s like we’re a club sports team but not — it’s more like a club, it’s a combination of that two.”

Because of the unique nature of the sport, many of the new members are freshmen or students who have never tried the sport, which represents a challenge to the club that Zucca enjoys.

“The beginning (of the year practices are) mostly going through the basics, fundamentals of climbing,” Zucca said. “We have classes to teach people everything they need to know right away. It’s pretty chaotic in the beginning with all these new people. After everyone knows what they’re doing, it’s usually just everyone shows up, climbs for two hours and it’s actually really fun.”

“It’s really cool to see people grow and get a lot better. Like in the beginning they’ll fall like four times or something and then three months later they’ll be climbing as hard as the people who’ve been climbing for years.”

For its third year in existence, Zucca and the club are looking to add more to the experience by trying to get more members involved in outdoor rock climbing. Although they enjoy the comfort and freedom of Turner Hall twice a week, the club knows indoor climbing pales in comparison to the excitement of the real thing.

Outdoor climbing takes much more training and teaching, but the club wants to get as many climbers as possible for a club-wide trip to the Red River Gorge in Kentucky this upcoming fall break.

“Once people have been in the club awhile we try to teach them as much as we can about climbing outside, because that’s not something you can just do on your own,” Zucca said. “There’s a lot of things you have to know. I had three or four mentors show me stuff before I was comfortable going outside.”

Since founding it, Zucca said the club has always been about welcoming all levels of experienced rock climbers, from beginners to veterans of the sport.

“The new people we get, I would say half of them have never even tried climbing before, a quarter of them climbed at like a birthday party or something and the rest have actually climbed before in high school,” Zucca said. “The first (goal) obviously is just getting people interested in rock climbing.”

The club meets Monday and Wednesday nights from 8-10 p.m. at Turner Hall across from the BMO Harris Bradley Center.