Sobelmans donates to charities affiliated with the university after reopening 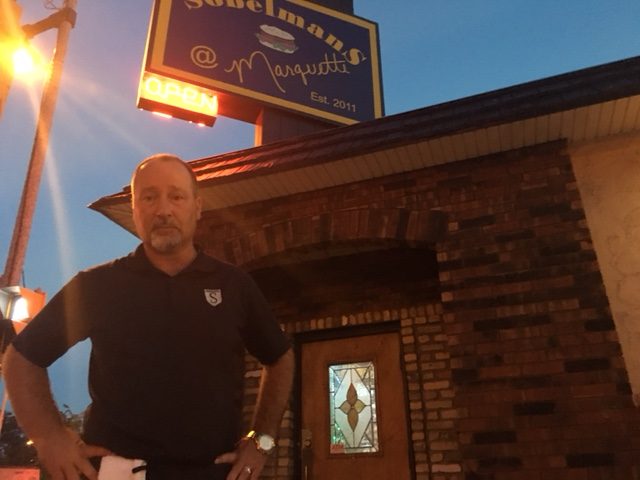 Sobelmans will close for two weeks due to suspended licenses. Photo by Rebecca Carballo/rebecca.carballo@marquette.edu

Sobelmans at Marquette almost faced a two-week closure due to licensing issues, but the restaurant dodged termination when one owner convinced the alderman to grant a temporary food license for the sake of its employees and promised to donate to charity.

The restaurant was closed by the city a week ago because the owners missed a hearing on July 12 to renew their food and liquor licenses. Usually, a hearing is not necessary for renewal, but one was issued due to the shooting in front of the restaurant this past June. The owners await a hearing Sept. 20 to determine if their licenses will be renewed.

“There are numerous things that come up daily (in running a restaurant), but this one slipped. It got by us,” owner Dave Sobelman said of an overlooked letter about the hearing.

As a result, the license expired Aug. 31, but the restaurant did not close until Sept. 6. According to Alderman Robert Bauman, it was operating illegally after the August expiration date.

Before the restaurant officially closed at 8 p.m. Tuesday, Sobelman spoke to many local news outlets.

“He was on TV essentially daring the city to shut him down even though he didn’t have the proper licenses,” Bauman said.

Bauman also said that he had not personally spoken to Sobelman about the restaurant closing.

“I have yet to speak to him about this because I think he’s been a big cry baby,” Bauman said. “Frankly, he just launched into a temper tantrum.”

Sobelman said his main concern was his 40 employees, including students, who would have been without work for two weeks. He had choice words for the alderman.

“It annoys me to no end that I’m self-employed with three restaurants, I employ 100 people and I work seven days a week,” Sobelman said. “This prick is a county employee who barely puts in eight hours a day, five days a week. When he’s sleeping in late, I’m up early, running around opening up three restaurants making sure staff is all ready to go.”

Bauman would be able to give him a temporary food license, but initially did not issue it.

“You’re basically slandering the person who has authority and can give you a break—very odd behavior,” Bauman said.

The restaurant remained closed for two days, and would have stayed closed until the September hearing if it was not for a letter the alderman received from Sobelman’s wife and partial business owner, Melanie.

In the letter she discussed the well-being of her employees. She wrote, “I employ nearly 40 individuals at this location, the majority of which are students and mothers, who rely on their income from Sobelman’s at Marquette to pay their bills.”

Her letter mentioned Sobelman’s fundraisers for the the fight against childhood cancer, which were scheduled before the hearing in two weeks.

She proposed that if the alderman granted the temporary license, Sobelmans would donate $1 for every burger and sandwich sold to a charitable organization affiliated with the university.

“I anticipate if I were allowed to reopen Sobelmans at Marquette within the next 24 hours the total contribution to these worthy organizations would exceed $5,000,” she wrote.

The letter swayed Bauman to grant the temporary food license.

“She made a good case,” Bauman said. “Maybe she should do more of the talking and interacting with the pubic.”

The Sobelmans said the fundraisers were quickly thrown together. Some of the organizations they plan on donating to are Marquette MARDI GRAS, St. Baldrick’s Foundation, Adaptive Abilities, Special Olympics and Best Buddies.

“Its cost me a lot of money because I’m selling half the burgers I’m supposed to sell,” Dave Sobelman said.

Clare Danielson, a junior in the College of Arts & Sciences, said she was glad to hear the restaurant reopened. She added that she was surprised it closed in the first place.

“It seemed odd to me (they closed) because they’re such a lucrative business and it’s such a good location,” Danielson said.

The restaurants’ other locations, downtown on West Saint Paul Avenue and in Mequon, are not affected by the licensing issues.

Bauman and Sobelman are optimistic that the liquor license will be renewed after the next hearing.