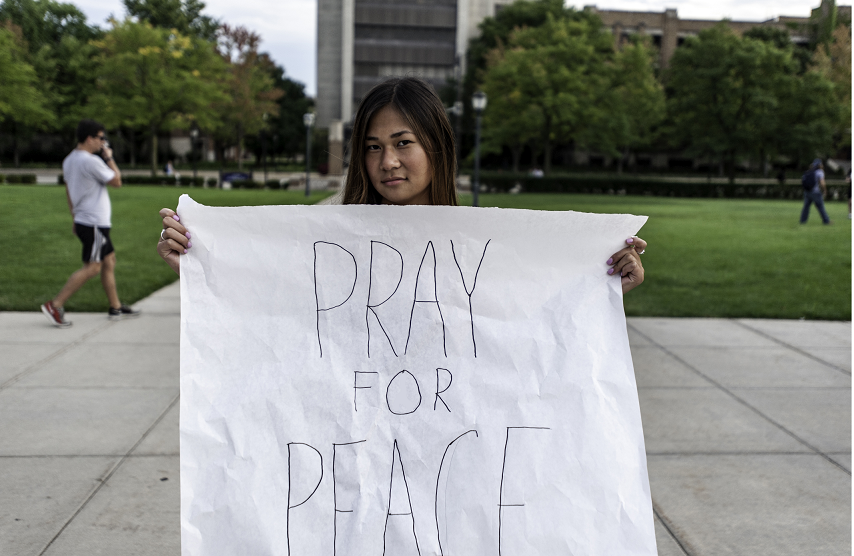 A Marquette student holds a sign that demonstrates her plea for peace. Photo by Michael Carpenter

For two Marquette professors, and Sherman Park residents, the events two weeks ago presented an opportunity to think about the causes of the unrest and act on possible solutions.

Teig Whaley-Smith is an adjunct associate professor of law at Marquette and the director of administrative services for Milwaukee County. Whaley-Smith was born and raised in Sherman Park, and currently lives there with his wife and four children. The unrest took place about four blocks from their home.

Whaley-Smith was initially taken aback by the unrest. “The fact that tension manifested itself in this form (of violence) surprised some people, and I would put myself in that category,” he said. “I never expected my neighborhood to be the subject of arson and things like that.”

Howard Fuller, Ph.D., distinguished professor of education and director of the Institute for the Transformation of Learning at Marquette, has lived in Sherman Park since 1988. His house is about 10 houses away from where Smith was shot and killed.

He was less surprised by the unrest, but said it “could have happened in any community in the city.”

Whaley-Smith agreed, saying, “Of all the neighborhoods, we’ve had a history of being able to come together and resolve really, really tough issues.”

Fuller has a long history of civil rights activism, and believes the recovery process will take considerable time.

“There are different levels of emotions that are operating in our community,” Fuller said. “People are trying to figure out: ‘How do we move forward?’ But it’s going to take a while, I think, for the healing to take place.”

Fuller continued, saying that the unrest, while partially caused by Smith’s shooting, was about general frustration with law enforcement, especially in black communities.

“When you have these kind of eruptions, they’re not a response just to the particular situation,” Fuller said. “It is primarily that, but it’s probably also sort of a history of other incidents that have occurred either in the city or nationally, and particularly as it relates to the police.”

Still, Fuller believes it is too easy to generalize a large group’s relationship with law enforcement.

“I think it’s going to come down to what has been your contact with the police, or your family’s contact,” Fuller said. “That’s probably going to greatly influence what your perception is of the police.”

Whaley-Smith echoed Fuller, saying the issue of law enforcement and race can be unnecessarily divisive. “You either support Black Lives Matter or you support the police,” he said. “What if I support both? And where is the opportunity to have that conversation?”

One area to have that opportunity will be at Marquette. Provost Daniel Myers said there will be dialogue dinners about race, along with speakers on campus throughout the year to discuss racial issues, with a focus on what it means to be African-American in an urban setting. He said more details about the dialogues will be released in the near future.

University President Michael Lovell said he has been in contact with city leaders about developing long-term programs to improve Milwaukee as a whole. He did not mention any specific programs, but said they will make an impact in the future.  “Through this effort, the city and others are going to help us find channels for our students, faculty and staff to make a difference,” he said. “Not just in Sherman Park, but in other parts of the city that need more help” as well.

Keith Stanley is the executive director of the Near West Side Partners and Avenues West, and serves as a liaison between the university and its surrounding neighborhoods. Stanley said the peace rally held in Westowne Square was “spectacular to see.”

Stanley, a third-generation Sherman Park resident, believes it is important for Marquette students to understand the struggles of other Milwaukee citizens “on a human level, with empathy and respect.”

Similarly, Whaley-Smith believes mutual understanding is key. “The more that we all recognize that we’re all human beings, we’re all Wisconsinites we’re all in this ship together, and show expressions of love to one another, that’s what’s going to get it done,” he said.

In Sherman Park, Fuller said the short-term response is “to do everything that we can to maintain peace” during this specific period of unease. However, he is concerned that the riots may not be the last example of violent altercations between citizens and law enforcement in Milwaukee.

“I’m very worried about what’s going to happen when the video (of the shooting) comes out,” Fuller said. “Something relatively small could happen between the police and someone and that could escalate.”

Fuller has been involved in meeting with local officials, activists and philanthropists to try to come up with short-term and long-term ideas, but acknowledged the difficulty with providing specific long-term solutions. He said it is important to continue the positive actions in Sherman Park, like after-school education and the Boys & Girls Club.

“Those of us who are doing something that we think is making a difference, we’ve got to double down on that,” Fuller said.

Despite the violence and unrest, Sherman Park residents seem willing to help get the community back on track. Fuller, Stanley and Whaley-Smith all intend to remain in the neighborhood and assist with the rebuilding efforts.

“It’s a wonderful neighborhood, and my kids get an incredible range of relationships,” Whaley-Smith said. “It’s a true reflection of American society all on one block, and what better way to learn the American experience than by being a part of it?”

“Clearly there are issues, but there are great things going on, too,” he said. “It’s unfortunate, but I’m not giving up.”

Stanley said that his 87-year-old grandfather, who has lived in the neighborhood for about 60 years, is an example of someone who is committed to staying and trying to help.

Whaley-Smith also said the community had a tremendous response to the unrest.

“We went with our kids to go help clean up the park, and that park has never been so clean in the last 20 years because there were so many people out there wanting to clean up the neighborhood.”

Fuller gave a broader explanation for why he feels responsible for helping the community.

“If you believe in social justice, you must continue to fight even when solutions are not in sight or even don’t seem possible,” he said. “If you don’t do that, then you are in essence co-signing on the injustice.”