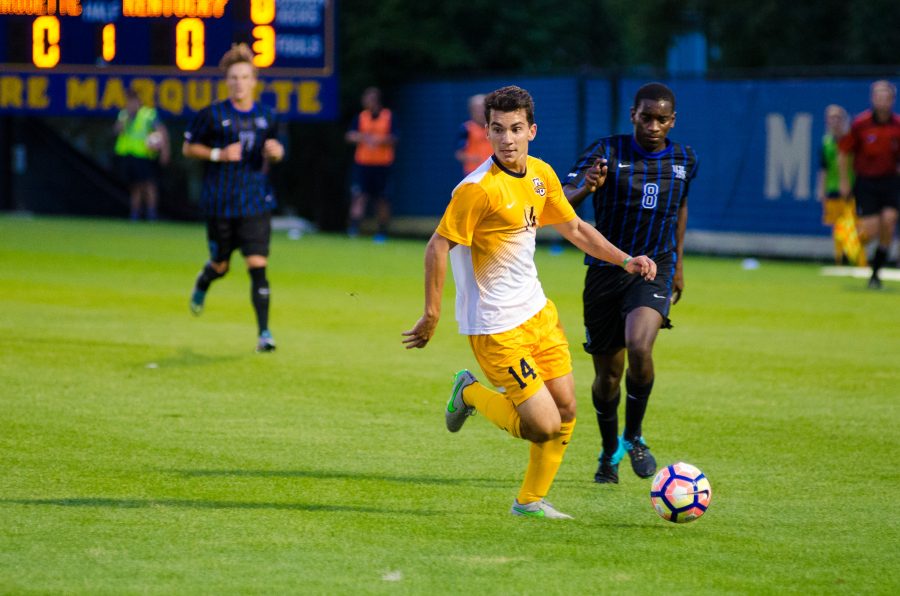 Luka Prpa hopes to build on a strong freshman season.

Marquette started its season opener against Kentucky with a bit of a spark. It didn’t look like a team still getting used to each other or a team that started four newcomers. Although the Golden Eagles had trouble getting scoring opportunities, they kept possession in the Wildcats’ end for a majority of the first.

That all changed in the 43rd minute, when Kentucky midfielder Napo Matsoso capitalized on a shifting Wicho Barraza to get the Wildcats on the board.

A minute later, Matsoso scored again, this time on a beautiful shot from outside the box. All the moral victories of the first 40 minutes were gone in the blink of an eye. Thus is the life of Louis Bennett’s youngest squad in years.

“The first 40 minutes, we had a couple of chances,” said Luka Prpa, who made his Marquette regular season debut. “The last five minutes we weren’t as sharp defensively. They scored two nice goals and that just gave them more confidence.”

Kentucky added two more, one from an outstanding cross on a free kick and the other on a 2-on-1 rush, to hand Marquette a 4-0 loss.

“It’s really frustrating when a game goes that way, especially when we put the work in in preseason,” Barraza said. “It’s a stinger.”

Although he gave up four goals, Barraza was far from the force that did Marquette in. He had little chance to save three of the goals, and despite not being tested often, he made two point-blank saves.

Bennett is keeping to the idea of a goalie rotation, as he said redshirt senior Mac Wheeler will get the start Monday.

“We want to try to define who our No. 1 is before the BIG EAST starts,” Bennett said. “As foolish as it seems, we gave up four goals, but our goaltending department has been very strong in preseason.”

Marquette’s offense struggled getting crosses to the heads in the box, even with twice as many corner kicks than Kentucky. John Pothast had the team’s best chance to score in the first, but his shot with the goalie out of position was blocked by a defender.

“It’s (about) better quality crosses and us getting on point when we do get in the attacking third,” Bennett said.

Even the inefficient offense all but disappeared in the second half, as Bennett said the game took the wind out of the team’s sails.

Despite the L on the score sheet, Marquette’s biggest loss on the night may be midfielder Ruben Sanchez. He tried staying in the game after taking a hard tackle, but fell to the ground a few seconds after the restart. He was favoring his right leg as trainers helped him off the field. Bennett said he was getting an x-ray after the game.

The Golden Eagles have a chance to redeem themselves Monday when the team hosts Northern Illinois. Marquette lost to the Huskies in dramatic fashion last season, giving up the tying goal with 55 seconds left in regulation and the winning goal in double overtime.