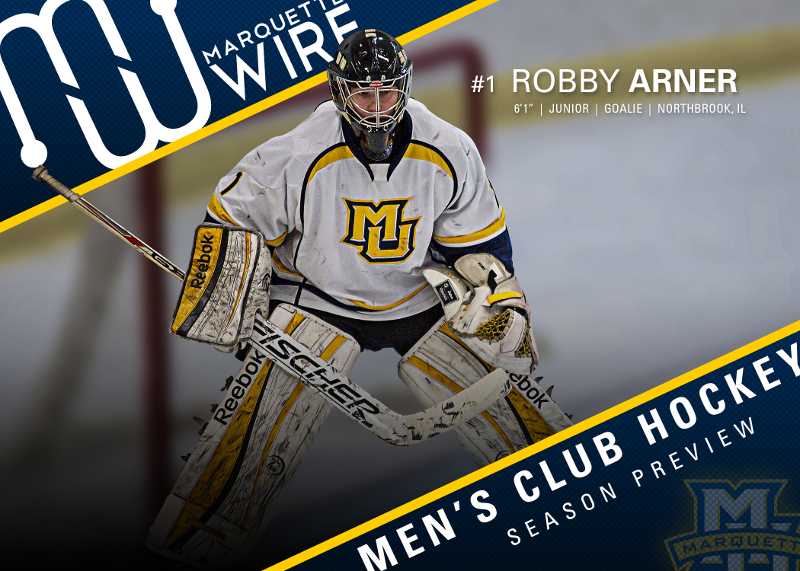 Goalie Robby Arner will once again be relied on heavily his junior season.

Overview: The Marquette hockey team ended its season in heartbreaking fashion last year. The Golden Eagles needed one more win to reach their season goal and secure a berth in the national tournament, but fell 10-6 to the McKendree Bearcats. The team did win its second consecutive Silver Division crown and will look to build off that with a roster that returns all but three graduated seniors. Securing a berth to nationals for the first time in three years will certainly be in Marquette’s sight.

Forwards: Marquette ranked in the top of its conference in goals, scoring 176 overall. Returning senior Johnny Stillman scored 25 goals and 16 assists to lead the team in goals. Head coach Will Jurgensen says he expects the Golden Eagles to retain their offensive firepower this upcoming season.

“Every class really has a ton of scoring abilities,” Jurgensen said. “I expect we will improve and keep the train rolling this season.”

Also returning is Brian Kennedy, who was second on the team with 40 points last season, and Michael Desalvo, who was third with 31.

Defense: The Golden Eagles will have to replace defenders Joe Bertane and Brendan Natwora, as both have graduated. Two players Marquette will rely on are Eric Plotz and Marc Shipbaugh. Standing 6-foot-3 and 6-foot-2 respectively, Jurgensen believes the two players’ height and physicality will help the team defensively.

Goalie: Last season Marquette lacked depth at the goalie position, causing the team to rely heavily on sophomore goaltender Robby Arner. This season, expect the Golden Eagles to have some backup with Arner still receiving the majority of the minutes. He went 23-4, posting a 2.83 goals against average and a .776 save percentage.

Despite the tremendous pressure Arner faced, Jurgensen says the experience his goalie received is something very valuable.

“We only had one goalie all year. He stood the task and played well every game and will continue to grow,” Jurgensen said.