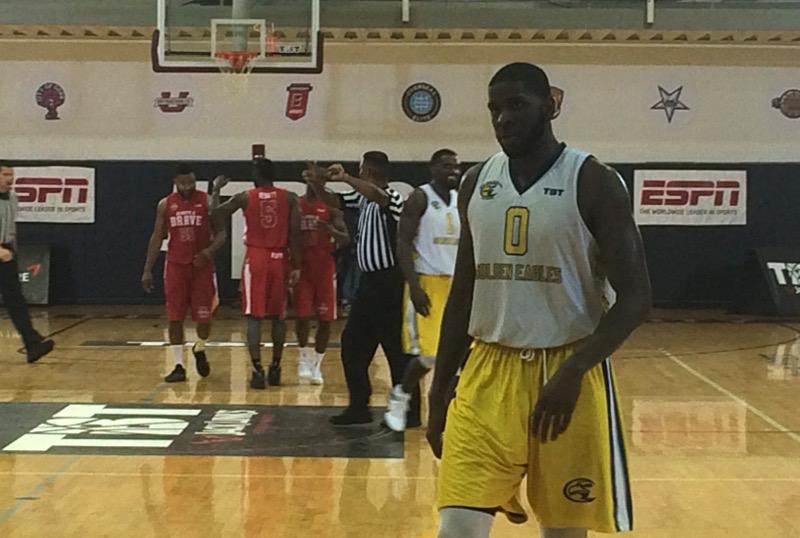 All tournament along, the Golden Eagles Alumni played a freewheeling style of basketball that relied on hot shooting and pace at the expense of deliberate sets on both sides of the ball. It finally caught up with them.

The Golden Eagles Alumni’s run in The Basketball Tournament is over after an 89-81 loss to Always A Brave in the round of eight. Brave, which is comprised solely of Bradley University alums, went on a 7-0 run to break a 69-69 tie and take the lead for good with just over five minutes left in the second half.

“We won some games, we had some success and we just kind of fell short today,” said general manager Dan Fitzgerald.

Two main factors contributed to the Alumni’s second half swoon. The first was turnovers; four Marquette giveaways in the final eight minutes led to seven points for Always A Brave. Small forward Jamil Wilson attributed the mistakes to a difference in intensity between the two teams.

“Their intensity actually went up. They got offensive rebounds and second-chance points and they were working well together,” Wilson said.

The other thing that worked against the Alumni down the stretch was Brave power forward Marcellus Sommerville. He had been kept in relative check for most of the first half by forward Jamil Wilson, but that all changed in the game’s second portion. Sommerville scored 18 of his 25 points in the final 10 minutes of the half, including two three-pointers.

If the second half belonged to Sommerville, then the first belonged to a different Brave big man: center Patrick O’Bryant. The seven-footer is Brave’s only player with NBA experience, and he played like it in the first half, putting up 13 points and two blocks. Sommerville and O’Bryant also muscled their way to 17 of the Brave’s 30 free throws.

“They got a lot of rebounds, they played well together and they did well together,” Wilson said. “Obviously (Brave)  knew how to move the ball and create mismatches and they ran a lot of plays for them. That’s what got them going.”

Brave led 36-23 with just over four minutes left to go in the first half. However, the Alumni countered with arguably their best run of the tournament. The Eagles shook off a 2 for 11 start on three-pointers to drain four of six from beyond the arc before the half’s end. Guard Joe Chapman sank a left-corner three right before the halftime buzzer to cap off a 19-3 Alumni run and give them a 42-39 lead at intermission.

The game went back-and-forth throughout much of the second half, with neither team able to gain much of an advantage. It remained that way until the Brave run with under five minutes left to go, which put the Eagles away for good. The Alumni managed to hit a few three-pointers in the last two minutes, but the result of the game was never seriously in question.

This loss means that the Alumni will not receive an automatic bid to next year’s tournament. If the Eagles want to get back to the tournament, they will have to do so the same way they got in this year, by fan vote. Fitzgerald seemed optimistic that the team will be back next summer.

“We wouldn’t just do it once,” Fitzgerald said about participating in The Tournament. “We heard a lot of good things about (The Tournament). I saw a few games the last couple seasons and it looked like a lot of fun… I see no reason why we wouldn’t do it again.”

Two Marquette players scored more than 20 points: shooting guards Darius Johnson-Odom (23) and Dwight Buycks (21). Buycks scored more than 20 points in all four of the Alumni’s games.
Always A Brave shot 57.1 percent from the field. It is the third consecutive game that Brave shot better than 50 percent
Alumni head coach Wesley Matthews was not present at the game. Travis Diener coached the team in Matthews’ absence.