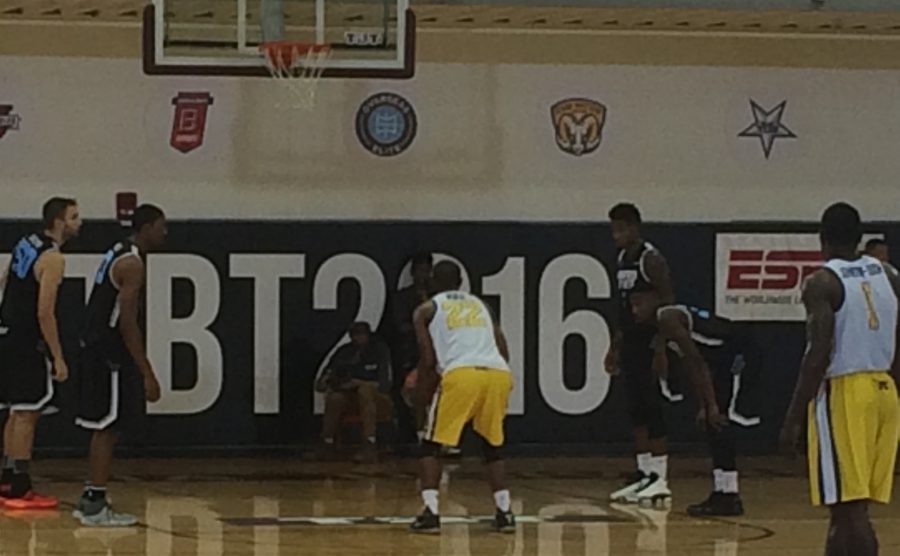 Free throws were key to Marquette's success, as they hit 22 of 24 from the line.

Despite Golden Eagles Alumni’s success in The Basketball Tournament, one big question remained for Marquette fans — Could the team win when the three-pointers weren’t falling? On Friday night in the Gallagher Center, the fans got the answer they wanted.

The Golden Eagles Alumni overcame a pedestrian (for them) 32 percent shooting mark from three to defeat Armored Athlete 82-71 in the Round of 16 of The Basketball Tournament. The Alumni will get a chance to play in the Elite Eight at the same court on Saturday.

To hear the team tell it, physicality was the secret.

“Ever since we went (to Marquette), we’ve been a tough, physical team,” said small forward Jamil Wilson, who had 18 points. “I think that’s something that we’ve learned, and we’ve taken with us, collectively and individually, to our programs that we play with now.”

Armored Athlete certainly did not make anything easy on the Golden Eagles. The Alumni’s lead was only 69-67 with just under four minutes to go after a driving layup from Will Clyburn. Marquette head coach Wesley Matthews immediately called a timeout after the bucket.

Just when it looked like Armored Athlete was ready to muscle its way back into the game, power forward Davante Gardner made a play. Gardner, who was able to join the Alumni for the first time all tournament, barreled his way into the lane and drew a foul. He then buried two free throws, reminiscent of his days as Mr. Automatic at Marquette.

Those freebies were the start of a 13-4 Alumni run to finish the game, a run that was given a final exclamation point by Darius Johnson-Odom. Marquette’s shooting guard received a double-clutch pass from Jerel McNeal on the left wing, took a dribble to his left, and buried a fall-away three to put the Alumni up 78-71 with just over 30 seconds to go.

Johnson-Odom’s three-pointer may have been the highlight reel play, but it was not indicative of how the night went. The Alumni, who had been shooting over 43 percent on three-pointers, went 5 for 19 on treys in the first half. It was largely a reliance on those threes that allowed a sharp, incisive Armored Athlete team to take a 38-37 halftime lead.

Matthews said that while the offense had been working well, the Alumni would have to move away from their reliance on the long ball in order to be successful.

“A lot of these guys can blow the stat sheet up on any given night; anybody on this team can go off for forty (points),” Matthews said. “I’d like to see them not settle for as many threes and get to the basket, because we got guys that can penetrate.”

The Golden Eagles took that message to heart, instead relying on a four-pronged attack to lead the offense. Four players – Gardner, Johnson-Odom, Wilson and shooting guard Dwight Buycks – combined for 71 of Marquette’s 82 points.

Among those four, Buycks stood out. He put up a team-high 23 points and attacked the basket with particular zeal, getting to the line a team-high four times and sinking all eight foul shots he took. The rest of the team followed Buycks’ lead by penetrating the lane instead of settling for jumpers. That strategy paid off; the Alumni generated 24 free throws by game’s end and converted 22 of them.

That resilience won out on this night, but even more will be needed if the Golden Eagles Alumni are to keep advancing in The Basketball Tournament. They’ll play Always a Brave, a team made up of Bradley alums, Saturday at 7 p.m. central.