Buycks free throws propel Golden Eagles Alumni to next round 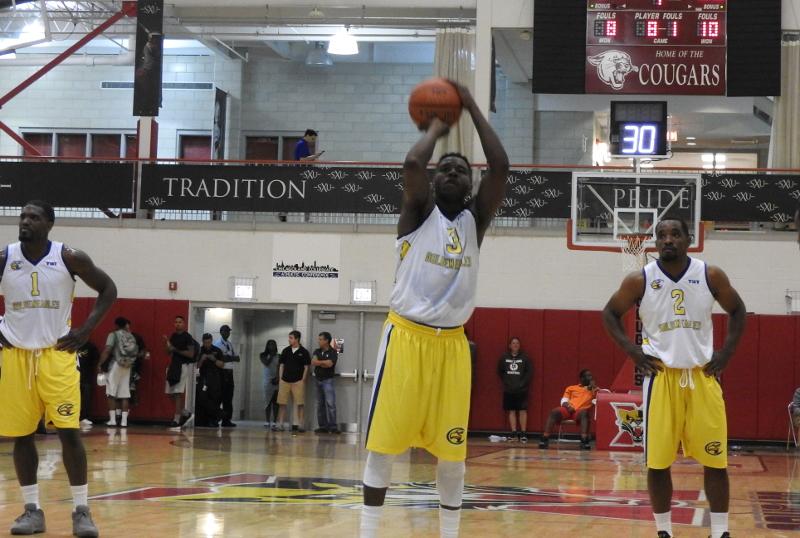 Dwight Buycks finished the game with 27 points on 8 for 16 from the field.

The Golden Eagles Alumni edged the Hoopville Warriors Saturday, 95-92, in the Midwest Regional of The Basketball Tournament.

This opening round battle had no shortage of drama, as Hoopville, losing 92-91, had two free throws with less than thirty seconds left.  The first free throw clanked off the rim, but the second shot was successful, tying the game with one play remaining.

Golden Eagles Alumni head coach Wesley Matthews turned to his leading scorer Dwight Buycks with the game on the line.  Buycks took the ball to the left corner and ran the clock down before putting up a step-back three pointer.  A foul by Hoopville guard Billy Baptist on the shot prompted three free throws for Buycks with 0.32 seconds left in regulation.  Buycks hit all three to give the Golden Eagles Alumni a 95-92 lead.

“I was just thinking, ‘Close the game out,’” Buycks said regarding his game-clinching play. “I’m not afraid to take the last shot, and I think I would’ve had it if (Baptist) didn’t foul me.”

Hoopville had their shot to tie the game but could not convert, sealing the deal for Marquette.

The heroic ending, however, hardly epitomizes the rest of the game.  After the Golden Eagles opened the game with a 5-0 spurt, they could not capture a lead greater than two points for the rest of the first half.

The absence of MU forward Jamil Wilson, who could not play due to NBA Summer League obligations, and Davante Gardner amplified the team’s lack of size.  Hoopville took advantage, shooting 53.3% from the field and out-rebounding the Golden Eagles, 24-8, in the first half.

Hoopville’s Malcom Griffin was arguably the biggest benefactor, scoring 11 in the first half and finishing with a team-high 20 points and three assists.

The one bright spot for the Golden Eagles in the first half was starter Joe Chapman’s red-hot shooting from behind the three-point line.  He shot 4-for-6 from three-point range in the half, whereas the rest of the team shot 2-for-11.

The start of the second half provided no relief for the undersized Golden Eagles.  Hoopville continued to expose Marquette’s lack of size, expanding the lead to 59-43.

“At that thirteen minute mark, the monkey was on our back and it could have went either way when (the Marquette-friendly crowd) started standing up for us,” Chapman said. “We just started fighting harder… and playing for them.”

“I got chills and started sweating when I heard that ‘We Are Marquette,’” Matthews said. “That was amazing.  It felt like we were back (at Marquette).”

“Just seeing everybody come out to watch us felt good,” Buycks added.  “It gave us motivation, it gave us more energy, and when we needed that energy, it was there for us the whole time.”

As the crowd volume increased, the Golden Eagles Alumni provided smothering defense.  This resulted in a dominating 20-10 advantage in the turnover battle.  The team also heated up from the field, shooting 56.7% in the second half.

This game was also the coaching debut for Matthews, whose status as an NBA player discouraged participation.

“This is hard,” Matthews admitted. “I have to give (Mavericks coach Rick) Carlisle credit.”

“Matthews did an awesome job in the huddles– doing plays on the fly and drawing things up quickly to get us in a good spot,” Chapman said.

The Golden Eagles Alumni will take on the Spartan Heroes, the alumni team for Michigan State, with a bid for the Super Sixteen at stake Sunday. Tipoff is 4:15 p.m.  The winner will face a relatively easy path following the losses to the top-seeded Bluegrass Boys and second-seeded Ants Alumni.

The Spartan Heroes defeated Ohio United 93-84 in the first round. The winner will advance to play the winner of the Armored Athlete and Canton Bulldogs game in the Super 16.

Matthews said he is unsure if Jamil Wilson will be able to play after finishing summer league with the Los Angeles Lakers on Friday. Gardner can’t play until next week due to his contract according to his Snapchat.