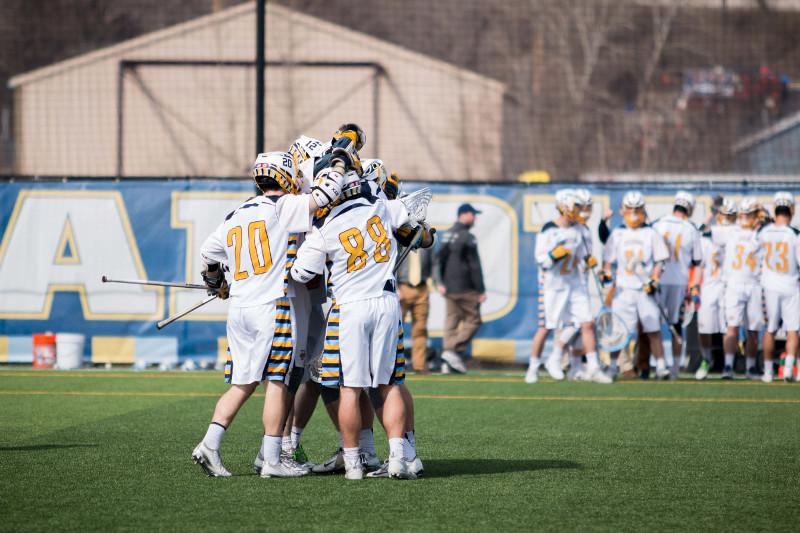 The Golden Eagles earned the sixth seed in the NCAA Tournament (Photo by Ben Erickson / benjamin.a.erickson@mu.edu)

Men’s lacrosse will have a lofty challenge when it hosts its first ever tournament game Saturday, as the Golden Eagles will welcome perennial powerhouse North Carolina.

“One thing I know, they don’t want to come out to Wisconsin,” Jake Richard said. “I can’t wait to get them, punch them in the mouth and welcome them to Milwaukee.”

The Golden Eagles weren’t waiting to find out if they made the tournament Sunday night, since they earned an automatic qualifier by winning the BIG EAST Tournament. The question was whether or not they’d host a game, a luxury given to the top eight seeds in the tournament. Although Marquette was projected to be one of those eight, neither Inside Lacrosse or Lacrosse Magazine had the Golden Eagles as high as sixth; the seed the selection committee gave to them.

“I’m not sure I even put this in my dreams for this program,” head coach Joe Amplo said. “To have that opportunity (to host) this early, I can’t even say it’s a dream come true because that wasn’t even in the dream world. It’s surreal.”

Blueprint of a program: How Amplo ended up at MU

The bracket unveiling was a surprise to everyone who packed into the Union Sports Annex for the viewing party except Amplo, who is a member of the tournament’s selection committee. As the seed announcements neared No. 5, he covered his smile with his hand. He was mute about the Golden Eagles’ fate, not even telling his assistants.

“I just wanted to experience that emotion of them and their true surprise,” Amplo said. “I was trying to be stone-faced.”

ESPN lacrosse analyst Quint Kessenich was critical of Marquette on the selection show, saying the team isn’t the sixth best in the country and is a one-trick pony. It’s just another chip on the shoulder for a team of undervalued players.

“Quint saying that is absolutely perfect,” Richard said. “Everyone is always looking to count us out. Him saying that we’re a one-and-done just feeds our fire even more. We can’t wait to prove him wrong.”

The Tar Heels went 8-6 on the season, finishing first in the stacked ACC in the regular season. North Carolina was bounced by Syracuse, the eighth seed in the NCAA Tournament, in the ACC semifinals.

North Carolina is led by Steve Pontrello, who is 10th in Division I and first in the ACC in goals per game (2.8). Amplo called Patrick Kelly, who scored 24 goals this season, one of the most dynamic players in lacrosse.

“They have great players,” Amplo said. “Their coaching staff is excellent … Those guys are always well prepared. They play hard.”

This selection is the latest chapter in Marquette’s historically quick rise to lacrosse prominence. To make the tournament as a fourth-year program is unheard of, let alone to host a game.

“Us 19 seniors poured our hearts into this,” Conor Gately said. “We’re excited to be where we are, but we’re not content. We want more. We know we’re capable of more.”

Marquette and North Carolina will play at 1:30 CT Saturday on ESPNU, the first of two days of first-round play. Ticket information will be announced in the near future. The winner will play the following Saturday in Columbus, Ohio against the victor of No. 3 Notre Dame and Air Force.