A night in the life of a Marquette LIMO driver 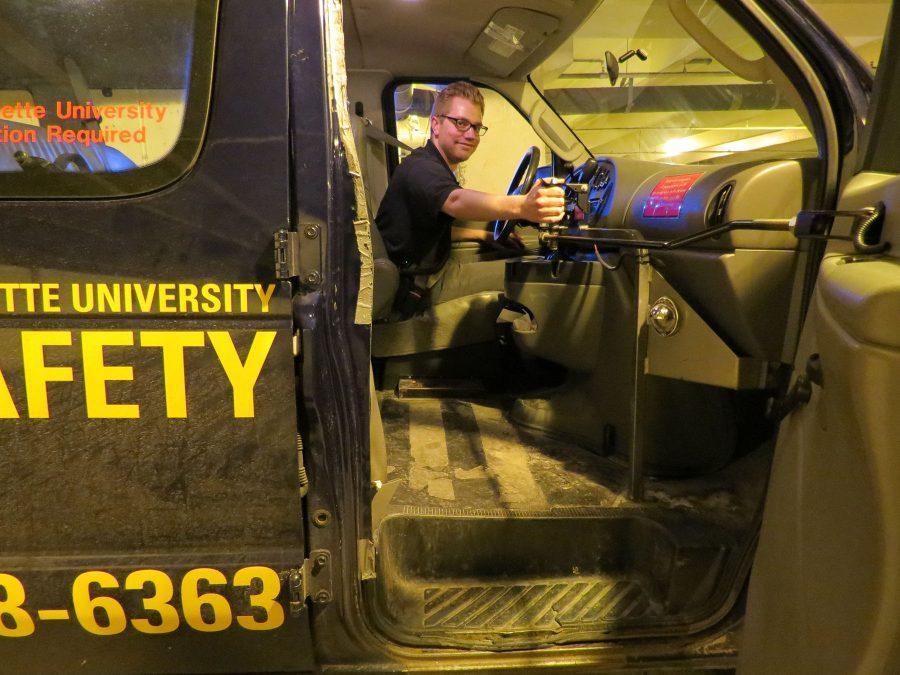 This common refrain heard every few minutes was the backdrop of a Friday night with LIMO Driver Zak Myers.

Myers, a senior in the College of Education, started working for campus safety in March 2012. He occasionally drives LIMOs, but his main job is to be the student employment coordinator of campus safety. It mainly entails coordinating employee training, scheduling, student-employee evaluations, hiring supervisors and other administrative responsibilities, such as coordinating Student Employee Appreciation Day. He works every Friday from 5 p.m. to 3 a.m.

While Myers acknowledged a 10-hour shift during the weekend can be grueling, it usually goes by relatively quickly because there is so much stimulation. Being a LIMO driver is “never a boring job.”

“There’s always something that you can do,” Myers said.

As Meghan Trainor’s “No” blared on the radio, Myers described the most difficult part of being a LIMO driver.

As the night began, Myers summed up the main tension between students and LIMO service.

“A LIMO is designed to get you there safely, not quicker,” he said.

He mentioned impatient students sometimes repeatedly call, “Thinking that the LIMO will get there faster.”

“The only time you would need to call back is if you possibly missed your LIMO,” Myers said.

No-shows, which is when someone calls to be picked up but then decides not to be picked up, because the longest delays. The driver has to wait for a few minutes, then call dispatch and confirm the no-show.

On Friday night, there were six blue vans and two express LIMOs in operation, relatively standard for the weekend. There are nine blue vans and four express LIMOs total. On the busiest nights, Halloween and SnowBall, all 13 vehicles are out on the streets.

With all vehicles operating, a staggering amount of students are transported during the busiest nights.

Myers said LIMOS are busiest during inclement weather, especially when it snows.

“No one on this campus can walk outside when it rains,” he joked.

Friday was a relatively quiet night due to the decent weather and looming finals. The van was nearly full for about 20 minutes, between 10:20 and 10:40 p.m., but otherwise never had more than four or five people at a time.

The training process for becoming a LIMO driver is substantial, according to Myers. Trainees must go through safety patrol training for three nights a week walking around campus.

“By walking around, you experience the radio, our procedures, a basic layout of campus,” Myers said.

Myers mentioned LIMO drivers must have a strong knowledge of campus addresses.

“You don’t need to know every single one, you just have to know the ones that people call by name” like Maryland Court or the Celeste.

Myers said the vast majority of students comply with LIMO rules, such as having their student IDs and wearing seat belts. There are only rare instances when a non-Marquette person tries to get a ride.

“My entire time here in four years I have had one person who was not a (Marquette-affiliated person) try to get on my van.”

Fortunately, Myers has only had one experience where someone puked in the van he was driving. Upon hearing this, a student passenger had the unique suggestion that anyone who pukes in a LIMO should be fined 50 dollars.

Every LIMO driver has a hand-held counter and is required at the top of every hour to call in the number of people they drove. The most people Myers ever drove in one hour was 110.

“That was the first Friday back of the (2013) spring semester,” he said. “It was like 20 degrees out and snowing all night, and we (only) had four vans on the road…That was the quickest night but it was also the most stressful I’ve ever had.”

That stressful night is an example of the occasional scheduling error.

“Saturday was SnowBall, so we made sure that SnowBall was staffed, and inadvertently understaffed Friday,” Myers said. “When I became head of scheduling, I made sure that that Friday was super-staffed too because I remember the horror of that one night a few years ago.”

Myers had few complaints when considering the qualities of his job.

“You get to listen to your music, it’s a high-paying job, you get to sit and be warm. For the most part, the students are relatively nice. You’ll get a few jerks every once in a while, but it’s not bad at all.”