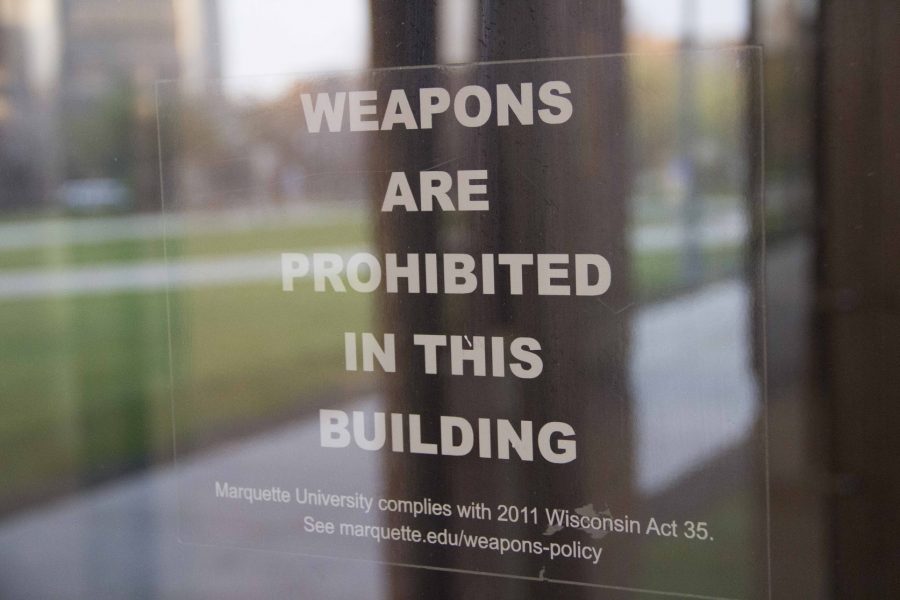 U.S. Bank in the Alumni Memorial Union has an unaffiliated MUPD security officer outside of the establishment since the robbery. Photo by Isioma Okoro-Osademe/isioma.okoro-osademe@marquette.edu

When the U.S. Bank robbery occurred in the Alumni Memorial Union on April 18, the Marquette Police Department did not perform a lockdown because the suspect had fled the building and no longer posed an immediate threat to people inside.

“When you’re dealing with a college campus, you have to consider this as a small city,” MUPD Chief Paul Mascari said. “When people are talking about lockdowns, they’re doing it from the context of a grade school, middle school or high school, and it’s much easier to do that.”

Though MUPD has never dealt with a lockdown situation in the past, Mascari said an incident with a large civil disturbance outside, such as a protest, may result in MUPD remotely shutting building doors for the safety of those inside.

“Our dispatchers have the ability to go on this unbelievably widespread camera system and start looking around for the person involved, which is the case last week (with the robbery),” MUPD Captain Jeff Kranz said. “Very quickly, we saw this guy leave the building on camera, so we knew we didn’t have to lock the building down because he left it.”

U.S. Bank has since stationed a security guard outside their location in the AMU. This security measure is not affiliated with MUPD.

The first step MUPD takes after receiving an emergency call is sending a squad car to the scene to confirm that the call is legitimate. If an immediate threat is confirmed, MUPD sends out a text alert.

“When there is an apprehension, a safety alert is not sent because there’s no longer an imminent threat to campus,” MUPD Sgt. Ruth Peterson said. “If that person is taken into custody, the threat is gone as the university is concerned.”

In special cases when there is enough commotion around a situation when MUPD arrives, alerts will be sent out before an incident is confirmed.

“If we don’t put something out, a lot of time misinformation gets out,” Kranz said.

Mascari said although lockdowns can provide a certain measure of security, they still don’t completely prevent people from leaving or entering a building.

“I think (the idea of) lockdowns has been drilled into so many heads … especially this generation that’s grown up with these lockdown drills in high schools,” Mascari said. “But (defense) training has really moved away from lockdowns being the only option.”

MUPD trains student employees, such as resident assistants and desk receptionists, to be more aware of their surroundings so they know how to respond in case of an active shooter situation.

This training was offered to the general student body, marketed as a self-defense class. The most recent training was held April 14 in the AMU, but had a low turnout.