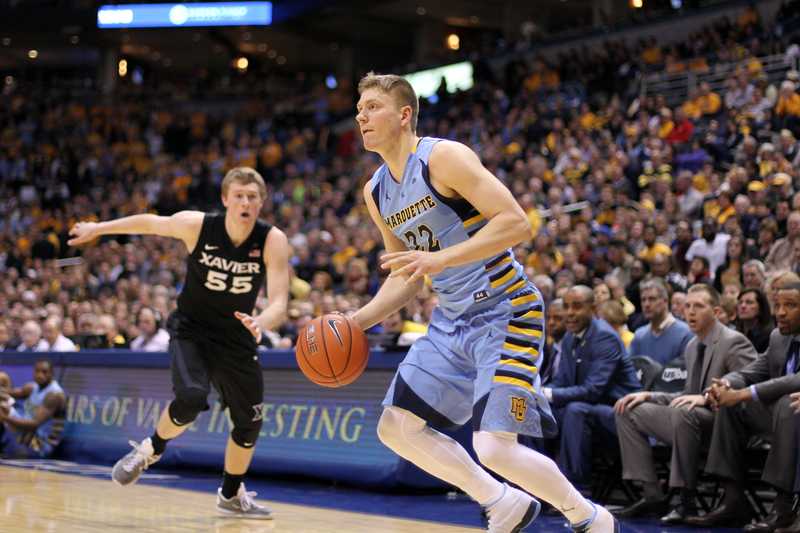 Wally Ellenson’s father John told the Milwaukee Journal Sentinel in November about a particularly sincere statement Steve Wojciechowski made regarding his recruitment of Wally in July 2014.

Flash-forward 21 months. Henry Ellenson’s time at Marquette has come and gone. Marquette is in need of another big man, but out of scholarships to give. The honorable thing to do is to stop recruiting, honor the commitments made to people already on the team and work with what is already built.

Instead, Wojciechowski appears to have forced Wally to give up his scholarship in order to make room for another player that might come to Marquette. On the surface, it looks like Wojciechowski lured Wally away from the University of Minnesota, reaped the benefits of having Wally when it was time to recruit his brother and then kicked Wally off the team when his brother left in order to make room for his brother’s replacement.

To be fair, Wally is a two-sport athlete and does still have a track and field scholarship for high jump. It’s not confirmed that this move was Wojciechowski’s doing; Wally could have left the team on his own, though Twitter hints at the former. Here’s what Wojciechowski said when asked about whether Wally would leave the team to focus on a potential professional track and field career: “There has been no discussion about it; no one has brought it up. Wally feels that basketball is his number one sport and he is fully invested in basketball.”

Unless Ellenson reversed a long-standing commitment to basketball in the last 10 days, it’s pretty safe to assume that this was not his decision. Anyone who says, “Well, he still has his track scholarship. What’s the big deal?” is missing the point. The man wants to play basketball, transferred to Marquette to play basketball and has put in the requisite work. He has every right to play basketball.

In a larger sense, this incident isn’t about Wally or Wojciechowski. It’s about the massive power imbalance that exists between coaches and athletes at the collegiate level. Coaches get paid, while athletes can’t so much as accept free food. Coaches have the freedom to leave without checking with their players, but not vice versa. Athletes plan their classes, bedtimes and free time to conform to the team’s – and by extension, the coaches’ – schedule. All the power rests at the top.

Perhaps this wouldn’t bother me as much if the NCAA just admitted what the rest of us have known since forever ago: Major college sports are a business. If it did, it would at least acknowledge the self-interest endemic to the entire system. The NCAA will never do that willingly, though. Instead, the powers that be pretend student-athletes are immature youth, at risk of being corrupted by money and in desperate need of guidance from their coaches. Many of those coaches are the biggest advocates of the system that gives them widely unchecked authority.

Those in favor of Wojciechowski will say that this sort of thing happens all the time. “That’s the way we’ve always done it” is a handy appeal to the past for people that don’t want to consider a different future. There’s no doubt that redaction of scholarships for convenience and winning’s sake happens all the time, but the relevant question is, should it? Based on logic, long-term consequences and general decency, the answer is no.