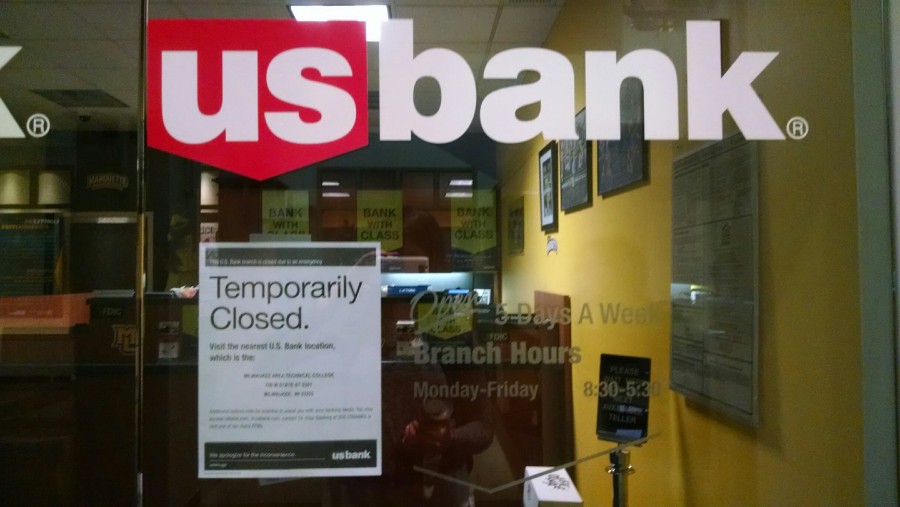 The bank closed for a bit after the robbery. Photo by Alex Groth/ alexandria.groth@marquette.edu

A 23-year-old Milwaukee man unaffiliated with Marquette walked into the U.S. Bank in the Alumni Memorial Union on campus and demanded money from bank employees. The suspect implied having a weapon and took money. He then fled on foot and was arrested by MUPD at Walgreens on the 1600 block of W. Wisconsin Ave.

Employees called 911, contacting the Milwaukee Police Department. The call was then transferred to MUPD, who apprehended the subject within 20 minutes.

MUPD was able to track down and identify the suspect by viewing security footage from cameras located in the AMU and outside McCormick Hall.

“In my 12 years here something like this has never happened,” MUPD Police Chief Paul Mascari said. “We’ve had robberies on sidewalks adjacent to campus, but something like this, (in) one of our buildings … it’s definitely something that doesn’t happen often.”

“The investigation is ongoing, and the case will be presented to the Milwaukee County District Attorney’s Office in the coming days,” wrote Milwaukee Police Department Sergeant Timothy Gauerke in a statement.

“We’re thankful that no students or staff members were physically harmed during this incident,” Jenkins wrote in an email. “It’s another example of the great work they’re doing to keep our campus safe.”

Correction: An earlier version of this story said MUPD “responded within 20 minutes of the incident and took the suspect into custody.” It now says MUPD apprehended the subject within 20 minutes. The Wire regrets this error.