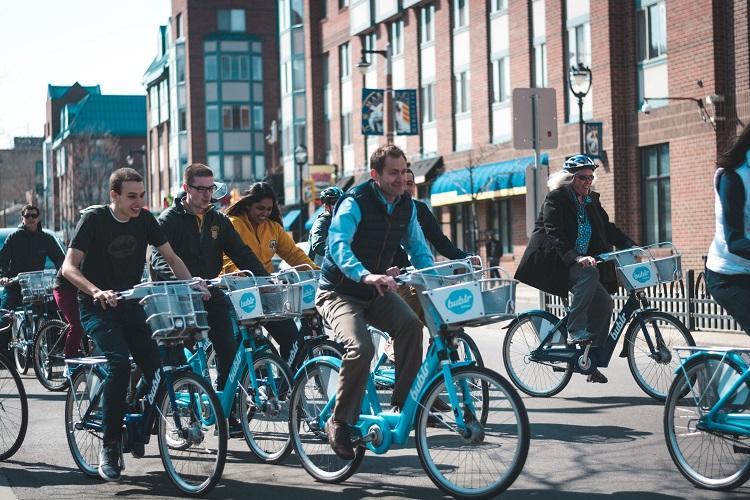 Marquette celebrated the opening of its Bublr Bikes station when Marquette University President Michael Lovell led a bike ride that coincided with Milwaukee Day (4-14) and recognized the positive impact Bublr Bikes will have on Marquette’s campus.

Bublr Bikes is a Milwaukee-based bike sharing company that allows people to rent bikes from its stations and return them to any station in the Milwaukee area. The Bublr Bike station at Marquette is located behind McCormick Hall. This will provide accessible, affordable and environmentally friendly transportation for both the Marquette and near west side communities.

“At Marquette, we’re really dedicated to tying ourselves to the Milwaukee community,” Lovell said. “And I look at (these) Bublr Bikes and I see we’re doing that.”

In traditional Marquette fashion, a Jesuit led a prayer and blessed the Bublr Bike station. The Rev. Frederick Zagone sprinkled holy water on the station before the riders took off on their inaugural ride.

About 50 students and faculty from Marquette, as well as residents from the near west side gathered at the event.

“We are dedicated at Marquette to having our students explore their city,” said former Marquette University Student Government President Zack Wallace.

“We happen to be the one (Bublr Bikes Station) that’s farthest west,” said Lovell. “I know our students and faculty at Marquette will use this to get all over the city.”

The goal of Bublr Bikes is to provide alternative transportation. Lovell spoke about how the bikes would help bring community engagement. Speakers from the near west side and Kevin Hardman, executive director for Bublr Bikes, were present for the opening.

“We hope to see Bublr Bikes bring an easy way for people to get around in an easy, fun and sustainable way,” said Hardman. “This is happening because people love Marquette. People love Milwaukee.”

Wallace said that without the partnership with Hardman, MUSG would not have been able to bring Bublr Bikes to Marquette.

“I would really like to thank Zack,” said Lovell. “MUSG was really the driver for this. This was a big part of their platform last year.”

Keith Stanley, who serves as the executive director for the Near West Side Partners, also spoke about the positive impact Bublr Bikes will have.

Stanley said, “It is good to have public alternatives for transportation.”

The City of Milwaukee has been working to make the city more bike-friendly. Jeff Lysnki, an engineer for the Milwaukee Department of Public Works, spoke about how the city is proud to invest in bike and multi-modal transportation.

Robert Bauman serves as the the Alderman for District 4 of Milwaukee, where Marquette is located. He said, “This day is a significant day for two reasons. One, it is a further expansion of the city’s efforts to provide multimodal transportation for our citizens. This is a further manifestation of the almost century-long cooperation and collaboration between Marquette and the City of Milwaukee.”

Adam Kouhel, the executive vice president for MUSG and a sophomore in the College of Business Administration, was in attendance for the event.

“When I was a senator in MUSG in 2015, we had voted to do a reserve fund allocation of $25,000 to support the Bublr Bike initiative,” said Kouhel. “And I just wanted to come out and support the initiative because I think it’s going to be great. It’s going to give students another mode of transportation. It brings more fun to Marquette.”

City leaders, Marquette students and faculty were in attendance for the bike ride with President Lovell and were excited to have the Bublr Bike station at Marquette.

“We couldn’t pick a better weather day,” said Lovell. “And we always say if we have great weather, we have the Jesuits to thank.”