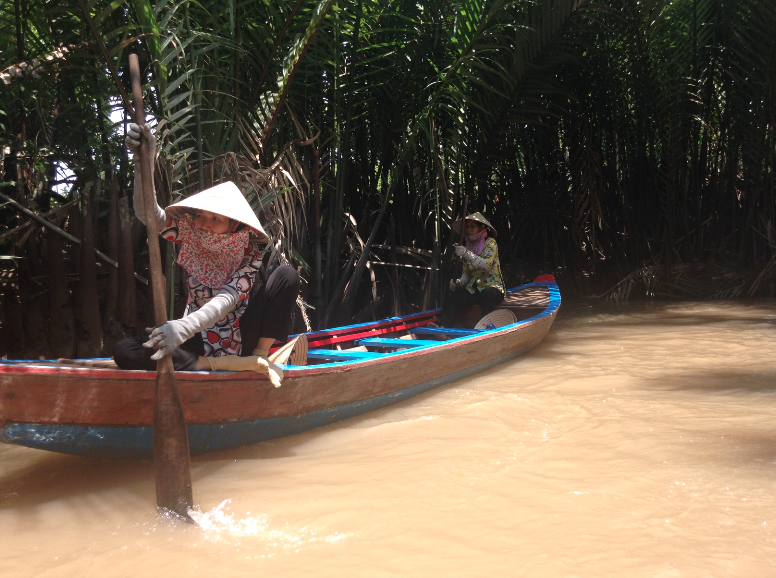 There are some experiences that cannot be adequately described secondhand, the ones which you find yourself telling others: “Just go see it.” Visiting the War Remnants Museum in Ho Chi Minh City, Vietnam is one of those experiences for me, and I wish other Americans had the opportunity to see it as well. A mere hour was all it took for my perception of my country to be turned on its head. This was a United States I had never seen before. Even mentions of the Vietnam War and its ugly truths are conspicuously missing from U.S. history curricula, among many others. What’s most disturbing is the other international tourists seemed to already know what I was learning for the first time.

I’ll admit I was dumbfounded at the rows of displays showing the hundreds of documents pleading with the U.S. to withdraw from Vietnam, accusing them of international war crimes, numerous violations of international law and endangering world peace. One letter in particular denounced such war crimes and was signed by 67 delegations from Asia, Latin America, Australia and Europe, representing some of our closest allies. Another letter written by former President of the World Peace Council John Bernal expressed, “Peoples of the world note with repugnance the U.S. government’s violation of all principles of international law.”

While the U.S. suffered an estimated 60,000 casualties, Vietnamese casualties are estimated at three million (from both the North and South sides of the country), with two million of those being civilians.

One of the museum’s most talked-about exhibits only begins to scratch the surface of the atrocities committed against the Vietnamese people. A fully intact storm drain sits on the floor with the following description:

“From 8 p.m. to 9 p.m. February 25th, 1969, a group of SEAL Rangers (one of the most selective rangers of U.S. Army) led by Lieutenant Bob Kerrey reached for Hamlet 5, Thanh Phong Village, Thanh Phu District, Ben Tre Province. They cut 66 year-old Bui Van Vat and 62 year-old Luu Thi Canh’s necks and pulled their three grandchildren out from their hiding place in a drain and killed two, disemboweled one. Then, these rangers moved to dugouts of other families, shot dead 15 civilians (including three pregnant women), disemboweled a girl. The only survivor was a 12-year-old girl named Bui Thi Luom who suffered a foot injury. It was not until April 2001 that U.S. Senator Bob Kerrey confessed his crime to the international public.”

Former Sen. Kerrey was awarded a Bronze Star for the raid of the Thanh Phong Village.

Perhaps the most controversial aspect of the war was the use of Agent Orange, a highly toxic mixture of chemical defoliants sprayed along roads, rivers, canals and military bases throughout the country. The idea was to kill vegetation that enemy troops used to hide and cut off food supply. Of the 19 million gallons of various herbicides sprayed, an estimated 13 million were Agent Orange, the most dangerous the herbicide.

Agent Orange contains dioxin, which was later revealed to cause numerous debilitating and life-threatening ailments, including but not limited to tumors, serious birth defects, multiple types of cancer, muscular dysfunction, skin problems and psychological defects. Almost immediately following the war, 2.4 million U.S. veterans sued the chemical manufacturers, mainly Monsanto and Dow Chemical, after cases of miscarriages, Hodgkin lymphoma, prostate cancer and leukemia became rampant among veterans and their children, even generations later. The case was settled out of court in 1984 for $180 million.

Missing from this case were reports of 400,000 Vietnamese people killed, half a million children born with serious defects and two million suffering from cancer or other diseases associated with dioxin. A federal judge rejected a 2004 lawsuit brought on by the Vietnamese against the same chemical companies that settled with U.S. veterans in 2005. Despite the inability of the Vietnamese healthcare system to treat the effects of Agent Orange, the U.S. government had yet to pledge any assistance or responsibility until 2012, and many don’t feel the plan is comprehensive enough.

Overcrowded orphanages struggle to support the large influxes of disabled and terminally ill children, with more born every day, generations later. Large “hotspots” in Vietnam are still toxic and will be for decades to come. The images of the millions of victims will haunt anyone who sees them.

It’s time a dark part of American history is brought to light. High school history classes should be teaching more than the Revolutionary War.