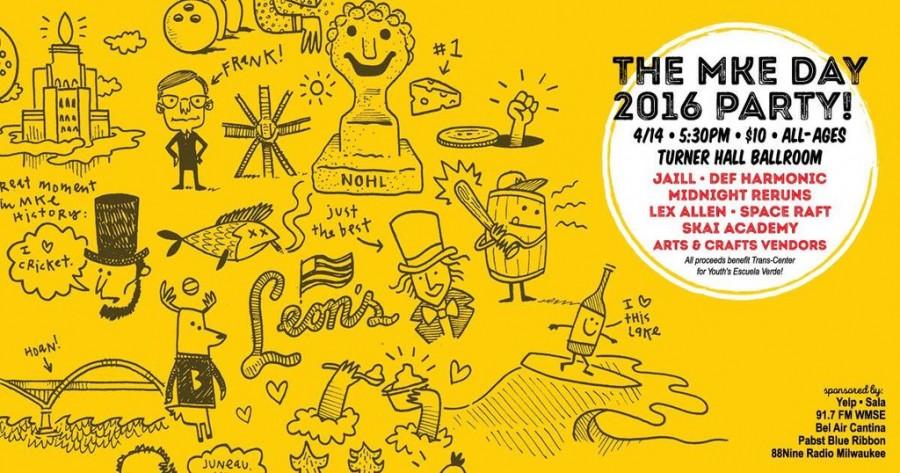 A simple text message from one brother to another started a local celebration that has been a hit for six years now.

Milwaukee Day was formed by Brent Gohde and Andy Silverman six years ago, after Silverman’s brother reminded him on April 14, that 4/14 are the same numbers used for the area code of Milwaukee. This realization led to the start of a citywide holiday.

“It was a logo and a website that year, a video the next – which got the attention of the local media,” Gohde said. “(It) has taken off from there.”

A party celebrating the holiday will be held in the Turner Hall Ballroom. There will be performances by local artists and bands, Hovercraft arts and crafts vendors and tacos for sale. The doors open tonight at 5:30 p.m., and tickets are $10. The first 200 people will receive a free Milwaukee Day coozie.

This is the third year that the party has been held at Turner Hall Ballroom. Previously, the MKE Day party was held at Cactus Club, Great Lakes Distillery, Stonefly, which is now Company Brewing, and several other venues.

“Eventually maybe we’ll get our act together and do that parade, a fun run, or a brat-drop on the city from a helicopter,” Gohde said.

Gohde said that the best thing about Milwaukee is that “there aren’t many transplants, so we all have this shared history we can draw from and have a ton in common as a community.”

He has seen people who have changed residences to other cities such as Boston, New York and Austin, and still have thrown MKE Day parties.

All profits from this year’s event will go to TransCenter for Youth’s Escuela Verde. It is a nonprofit charter school that works with students grades 7-12. Gohde said he is most looking forward to assisting its mission.

A lot of bands were invited to play at the MKE Day party this year.

“It all worked out great, with five bands who would otherwise be headliners all on the same bill,” Gohde said.

Some of the performers include Jaill, Def Harmonic, Midnight Reruns, Lex Allen and Space Raft. This will make for a night of rock, pop, rap and R&B.

Skai Academy, a youth arts ensemble made up of 11 to 16 year olds, will be the opening act. Kai Simone, director of Skai Academy, said that they are excited to be performing for a worthy cause that will directly benefit some of the band members and students at Escuela Verde and TransCenter.

“We hope that even though the band is comprised of kids and are not full time musicians, that they are learning to play music with a purpose and be entertaining,” Simone said.

In continued celebration of MKE Day, there will also be a community clean-up at Escuela Verde and around the Urban Ecology Center from 4-5 p.m. tonight as well. Many local businesses are also in support of MKE Day, offering sales and specials to observe the holiday.

Jordan Davis, guitarist, lead vocalist and writer within the band, Space Raft, is excited to perform for the MKE Day party. He said that all of the members of the band are originally from different parts of Wisconsin, yet the band as a whole loves Milwaukee and thinks of it as home.

“Most of us have been here for a better part of a decade and have no plans on leaving anytime soon,” Davis said.

This is the first time Space Raft has ever played at Turner Hall, and the band is eager to keep up the tradition of putting on an amazing show that the many other artists before them have had the privilege of doing.

The band is going to play songs that are related to the band members’ experiences in Milwaukee. The main goal of the performance is to bring smiles to MKE Day Party goers, Davis said.

Graham Hunt, guitar player and singer-songwriter of the band Midnight Reruns, has enjoyed playing with his band and is excited to return to playing at Turner Hall.

“(Midnight Reruns has) developed into a really nice and reliable creative outlet,” Hunt said. “I get to play music in front of people with some of my best friends who also happen to be some of the best musicians I know.” All of the band members are from Milwaukee.

“Milwaukee isn’t perfect by any means, but every once in a while we need a random excuse to come together and celebrate all the hard-working, generous and talented people that make our city unique and quirky,” Gohde said.