Students of all faiths learn about hijabs, step outside comfort zone 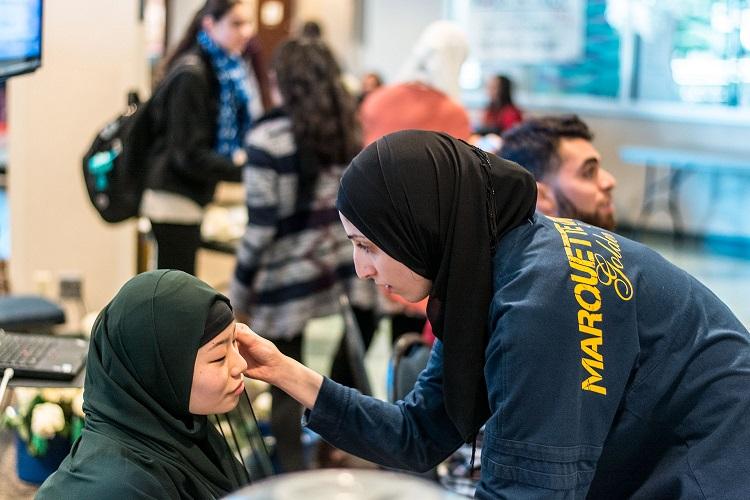 The Muslim Student Association gave away 50 hijabs and 250 roses during this week’s “Take a Stroll in My Scarf and Share the Love,” part of the organization’s annual Islam Awareness Week.

Club members instructed interested women on how to wrap the traditional headscarves known as hijabs and handed students white roses with an attached hadith, a quote from the Prophet Muhammad. MSA ran out of both the hijabs and roses well before the event ended.

“We wanted other people to have the opportunity to walk in our shoes because even though it is just a piece of fabric, girls get a lot of criticism for it,” said Myra Khan, MSA member and junior in the College of Arts & Sciences.

MSA members at the event explained the hijab expresses modesty and helps others focus on a woman’s character instead of appearance. The Islamic faith also honors Mother Mary, who often wore a headscarf. The hijab is another way to recognize her influence on the religion.

“Wearing a hijab is a personal choice and it is a commitment to yourself and to God,” said Ayah Ali, MSA member and junior in the College of Business Administration.

Hijab Day was open to students of any religion. Many students brought their own scarves to the event to be worn as a hijab for the day.

“Being outside my comfort zone, I really appreciated my own courage and soon the hijab made me feel empowered,” Emily Balentine, a freshman in the College of Arts & Sciences said in a Facebook post on MSA’s wall. “I really admire the beauty of every woman who wears a hijab.”

Balentine said participating in Hijab Day was challenging, but she thanked MSA for the opportunity.

At the event, MSA also handed out free cupcakes, pins and brochures which included “frequently asked questions about Islam,” “about Islam: a brief introduction,” and “misconceptions about Islam.”

“I think this (event) is a step forward for Marquette to become more inclusive,” Ali said.

MSA encouraged those who participated in Hijab Day to gather for a reflection meeting at 7 p.m. in Cudahy to discuss their experiences.

The rest of Islam Awareness Week includes a spoken word poetry event Wednesday, a keynote address by Islamic activist Habeeb Quadri on Thursday and a community service project and prayer observation on Friday.