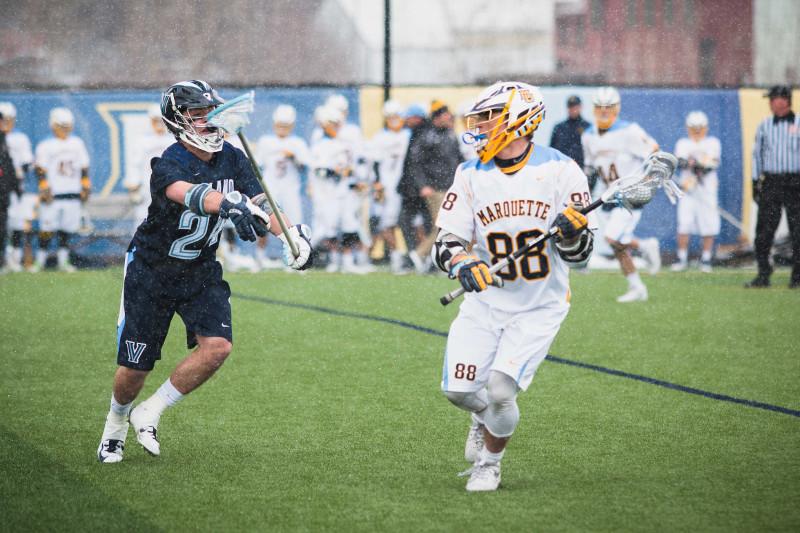 For the second straight year, men’s lacrosse team will face Notre Dame while the Irish are ranked 1st in the country. Marquette is hoping for a different result this time.

Despite going up 2-0 early in last year’s game, Marquette was doubled up by the Irish in a 14-7 loss. Marquette head coach Joe Amplo said it will be very difficult to extend those runs with the type of talent Notre Dame possesses.

“They’re so good on defense,” Amplo said. “They control the middle of the field really well. We just have to be poised and we have to play with confidence. Our kids are confident that they can compete with them athletically. Now, it’s about executing.”

The Fighting Irish are 8-1, with their only loss coming in overtime against Denver last month. Notre Dame boasts one of the most star-studded rosters in Division I, including attackmen Matt Kavanagh, midfielder Sergio Perkovic and defenseman Matt Landis.

Kavanagh, selected 5th overall in the MLL Draft by the Denver Outlaws, leads the team with 27 points. He’s one of six players in Notre Dame program history to pass the 100 point plateau.

Pekovic is one of the best sharpshooters in lacrosse, as shown in the 2014 National Championship. He scored five goals as a freshman in his national coming out party. He has 17 goals in nine games this season.

Landis, selected 3rd overall in the MLL Draft by the Florida Launch, was the ACC Defensive Player of the Year and won the William C. Schmeisser Award, given to the nation’s top defenseman, last season. Despite playing on Conor Gately the past three years, Amplo said he’d be surprised if Ryan McNamara was Landis’ assignment this time. However, Amplo noted that the Notre Dame defensive group is so deep, it almost doesn’t matter who the assignments are.

“They have so many pieces defensively,” Amplo said. “They’re confident in their team defensive scheme that whoever they match up with, they’re going to be successful.”

Notre Dame is coming off a tight 8-6 victory over then-No. 12 Duke on Sunday. After all the hype surrounding the nationally televised game between the two rivals, Marquette could benefit from catching the Irish on a short week.

“It doesn’t hurt, that’s for certain,” Amplo said. “Looking at them, emotionally that’s a big game that they just had.”

Face-off is set for 3 p.m. Wednesday from South Bend, Indiana. The game will be streamed live on ESPN3.