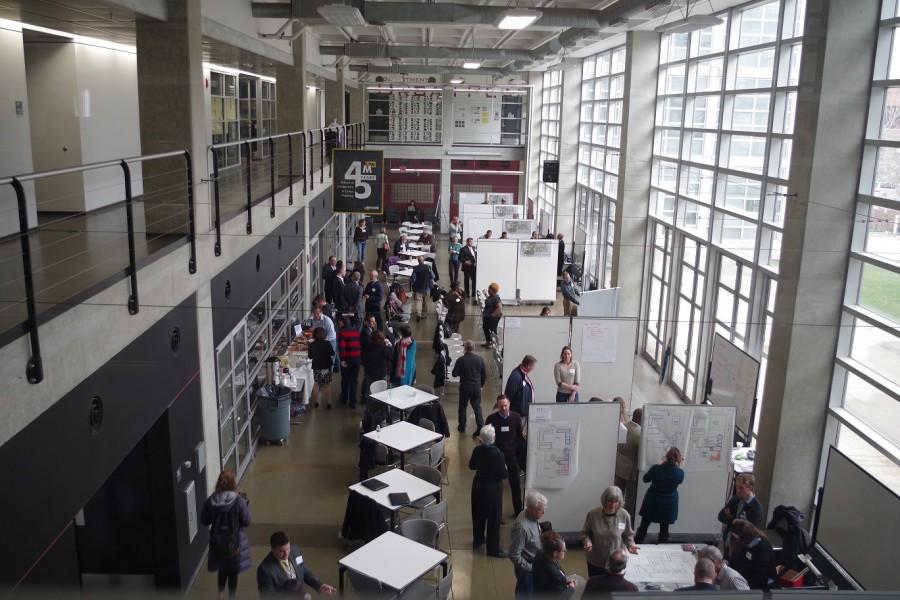 The University of Wisconsin-Milwaukee hosted a charette meeting Thursday at its School of Architecture and Urban Planning for the Near West Side Partners neighborhood association, which involved discussion about building a grocery store near Marquette.

The charette was the sixth of its kind to be held by UWM and the first for NWSP. Architects looked at six sites on the west side, including three near 27th and Wisconsin Avenue. Each site was set up as a station for attendees to view and provide feedback while teams of architects drew out potential plans for the site.

Prior to the charette, UWM gathered six focus groups to get a better idea of what people want to do with the sites. Developers, funders, stakeholders and the NWSP board comprised their own focus groups, and two additional groups were made up of area residents.

Carolyn Esswein is a professor at UWM’s School of Architecture and Urban Planning and the director of this year’s charette. When presenting the six sites, she addressed the reoccurring request for a local grocery store that many residents voiced as a priority.

“What we’re talking about today is a neighborhood, smaller-scale grocery … , for reference, (something) the size of an Aldi,” Esswein said. “We are looking at those for the 35th street corridor, not 27th street. There is going to be another (grocery store) on Marquette’s campus, but we’re looking for other opportunities.”

Allyson Nemec, owner of Quorum Architects, and her team were drawing plans for a lot on 27th and Wisconsin Avenue and looking for ways to attract students and residents to the area. They tossed around ideas for a coffee shop, office space, indoor farmers market and restaurants.

“This farm to table idea is to have an indoor farmers market and potentially a greenhouse on the outside, so it would be a kind of organic, local farming cooperative piece,” Nemec said. “We were told (the site) was not a good opportunity for a grocery retail. There’s bigger sites that have more parking opportunities.”

Some residents are concerned about the safety of locations on 27th Street. Nemec mentioned an ambassador group that the anchor institutions of NWSP, including Marquette, are putting together to patrol the area and keep watch for crime.

“Security is the wrong word, they’re more of a presence,” said Patrick Kennelly, the director of Marquette’s Center for Peacemaking.

The Marquette Police Department’s patrol routes stretch to the 27th block of Clybourn Street, but don’t go down to 27th and Wisconsin Avenue, according to the department’s 2015 policy and procedure manual.

Milwaukee Mayor Tom Barrett visited the charette to survey the architects’ plans and speak about new developments in the city.

“There is so much that we can do with the near west side,” Barrett said. “I think, in the terms of the history of this city, and the history of cities in general, there is no better time than right now.”

Kelsey Otero, Marquette’s social innovation coordinator, said new plans from the charette will not always be put in the places for which they were developed.

“There’s successes from every single one of these that come out,” Otero said. “A couple of (ideas) for sure will be developed.”

Plans from the charette are being finalized in the following two weeks and a report on them will be released in May.