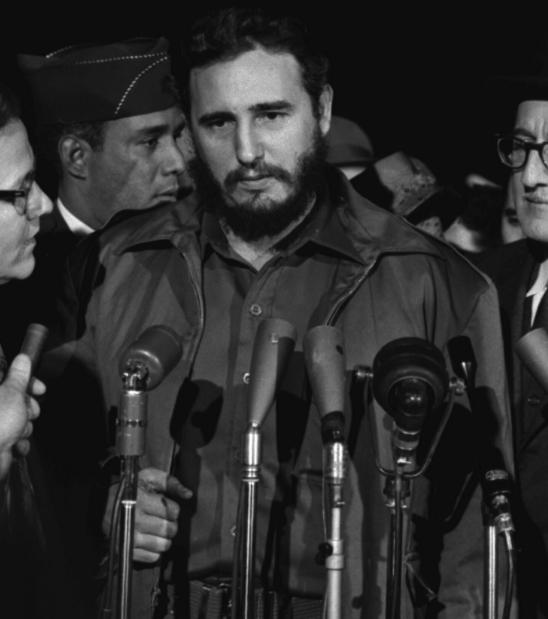 An old photograph of Fidel Castro when he visited the United States in 1959. Photo via www.wikimedia.org

While we were all enjoying spring break a couple weeks ago, President Obama was making history as the first sitting American president to visit Cuba since former President Calvin Coolidge.

The press lauded the reestablishment of diplomatic ties with Cuba, but it did have its critics – both here and there. Most notably: former Cuban President, Fidel Castro.

In his article “Brother Obama,” he skewers the president as ignorant or hypocritical or both. But Castro’s own statements paint his character with similar colors.

To begin, however, let us give credit where credit is due: some of Castro’s criticisms are fair. Obama’s language did verge on melodramatic – “I have come here to bury the last remnant of the Cold War in the Americas,” – and Fidel Castro is not alone in rolling his eyes.

Fidel Castro wrote, “Obama made a speech in which he uses the most sweetened words to express: ‘It is time, now, to forget the past, leave the past behind, let us look to the future together, a future of hope.’” But Castro doesn’t want to forget the past, “Nobody should be under the illusion that the people of this dignified and selfless country will renounce the glory, the rights or the spiritual wealth they have gained with the development of education, science and culture.” Then again, perhaps Castro’s rhetoric verges on melodramatic, too.

Maybe Castro sees Obama’s idealistic comments as ushering in a brave new world where individual cultures are absorbed into an impersonal market economy, where we are disconnected from our past, from the stories that give us our sense of belonging and identity.

If that is his concern, he is not the first person to voice it. Every economics textbook I’ve had has a paragraph about the fear many have of losing their cultures in the process of globalization.

It is ironic for a Marxist to express this sentiment, and it is particularly hypocritical coming from Fidel Castro. Let us not forget that his revolution is responsible for the suppression of religion, the silencing of political foes and other human rights violations.

This is not the only place Castro’s article is incoherent. In one breath, he calls the embargo “a ruthless blockade,” and in the next he declares, “We do not need the empire to give us anything.”

Does he or does he not want to trade with America? I can’t tell. Though the spiteful way he uses the word “mercenary” throughout the paper leads one to believe he isn’t enthusiastic about trade with anyone.

He quotes the Cuban poet Bonifacio Byrne, “My flag is that which has never been mercenary” – the implication in this article being that the stars and stripes always were mercenary. It reminds me of a criticism from a different dictator: “They are a nation of shopkeepers.” That was Napoleon, and “they” were the British. But the meaning is the same: There is something shameful or immoral in the profit motive.

Why we should feel that way baffles me, though. Poet language about “glory” and “spiritual wealth” aside, America has done a great deal more to improve the well-being of her citizens with free market principles than Cuba ever did hers with Marxist ideology.